Before we get started:
NEWS OF THE YEAR I READ THREE TIMES TO MAKE SURE I WASN’T IMAGINING THINGS

Air Djibouti’s new slogan should be “Where every departure is two minutes to midnight.” The last time I saw Bruce Dickinson I got hit in the head with a bottle outside of an Iron Maiden concert. I was taken to the hospital, got five stitches, and then convinced the nurse to drive me back to the show. Even the most hardcore of metalheads kept their distance from the freak in the bloody head bandage and yellow t-shirt with red splotches all over it.
But I’m not here to talk about me. Oh, wait, this whole website is about me. Anyway, I was in Berlin for the 25th anniversary of the reunification between East and West Germany, a touchier subject among eastern Germans than you might guess. I was in East Berlin twice during the good old days of separation, so I have a long history with it. Nonetheless, is there any argument that Berlin is the most compelling city in Europe? Please let me know if I am mistaken. 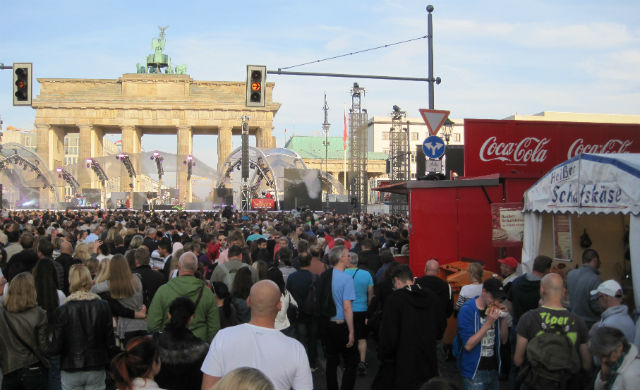 Right in front of the Brandenburg Gate they put on an all-day show, but this photo is just an excuse to show the “Hot Sheep Cheese” stand, the white tent on the right, which must be the only thing all Germans can agree upon since it was the food closest to the stage. 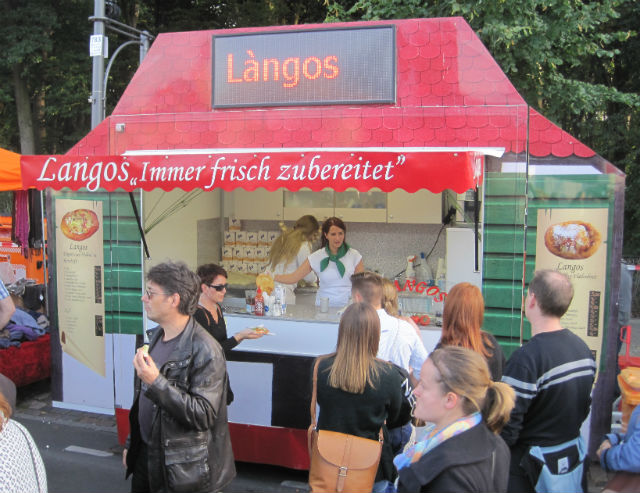 Greasy Hungarian food was well represented on German reunification day. I stopped counting the langos stands after four. All it takes is one heavy Hungarian langos and you can barely move. Hungarian food as crowd control! Genius. 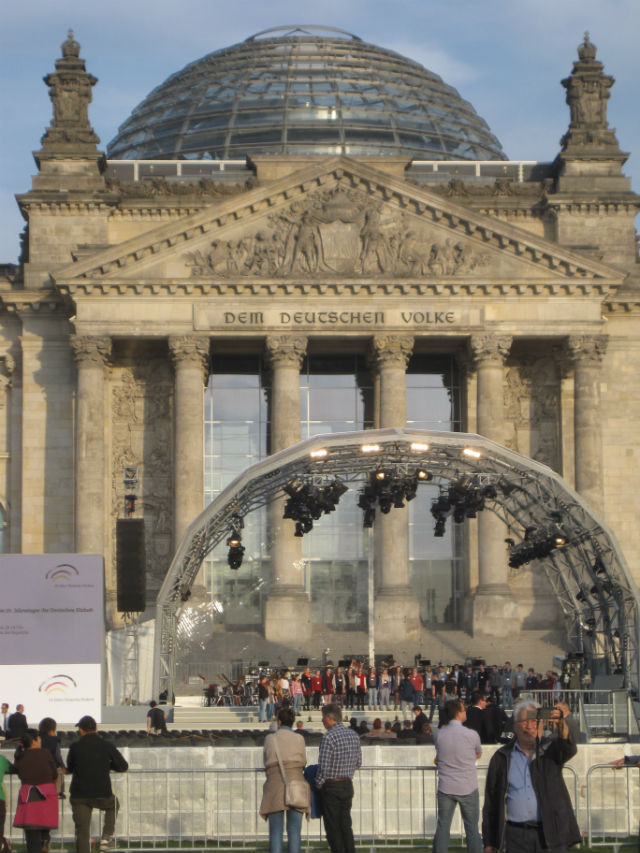 A short walk away from Brandenburg Gate is the Reichstag (Parliament building) where there was another show, but here the police barriers were in full force to keep people at a distance. From a choir. Once those German choir aficionados start feeling it, the mosh pit can get out of hand quickly. 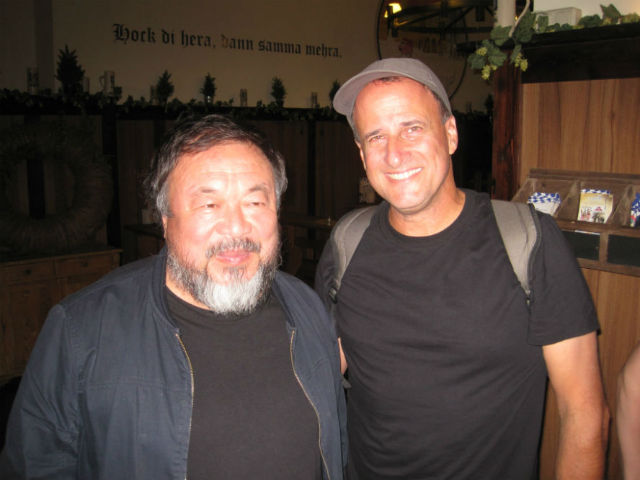 In Berlin there was a spotting of Ai Weiwei, and when he got up from his group two of us formed an elaborate pincer movement to corner him. We then had a host of camera problems, but he was good-natured about it. Unfortunately, the distraction meant that others then came over wanting photos. Being famous must be awful because of people like me. 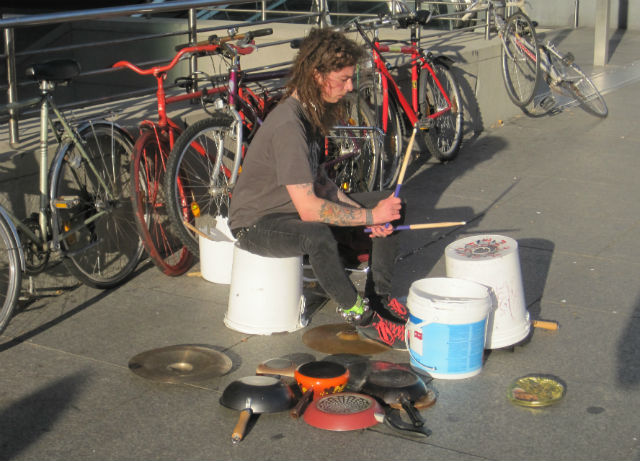 This is Paddy from Belfast, Northern Ireland, who intends to travel the world playing frying pans and buckets. He was fantastic, a blur of intensity. In a perfect world I would have video here instead, but that perfect world is coming. 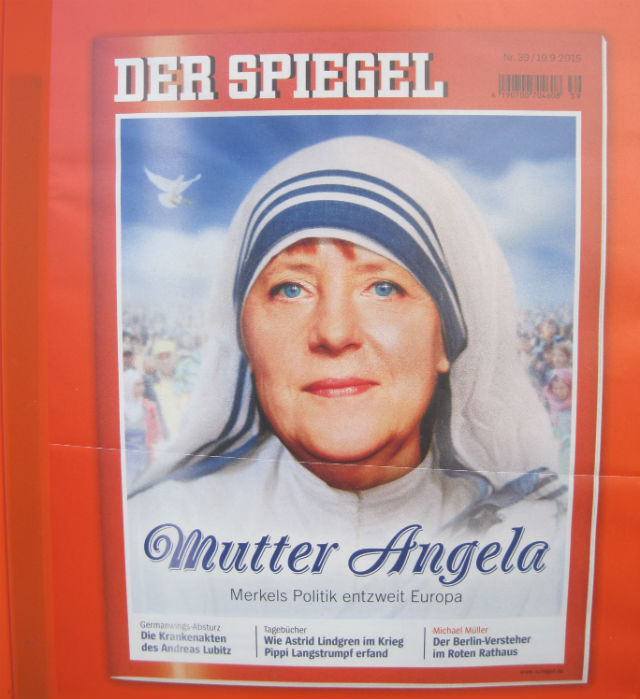 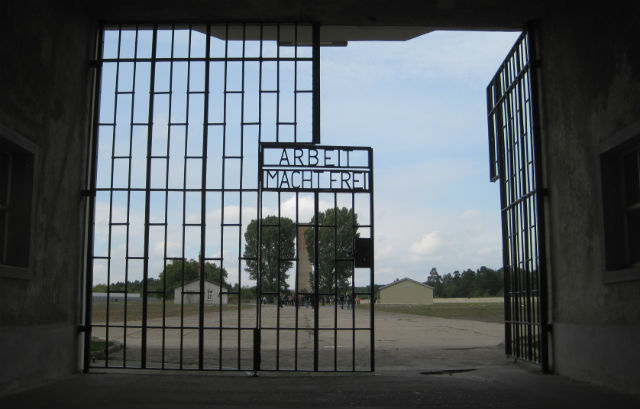 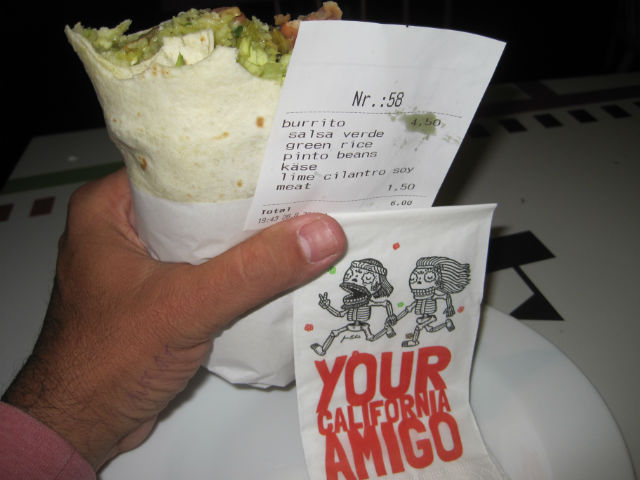 I saw the Dolores Burrito shop in Wittenbergplatz and I flinched. Normally I am a Mexican food and sushi snob and refuse to eat them outside of their original domain, but I made an exception. Can we say now that burritos are more American than Mexican, and certainly more prevalent? Burritos are to California what doner kebab is to Germany and chicken tikka masala is to England.
When I walked inside and saw that indeed they meant Dolores St. with a huge map of San Francisco on the wall, I couldn’t resist. Yes, I did have a lime cilantro soy meat burrito. Born and raised in Northern California!

PRACTICAL INFORMATION
Don’t put chipotle mayo on a burrito.
A private room on Airbnb can cost the same as a dorm bed in Berlin, but few such people let you book immediately, and for a last-minute person like me, the wait for someone to approve my stay took too long. I ended up at Hotel Big Mama, a hostel near Osloer Strasse, which is perfect if you fly into Tegel Airport as the 128 bus ends right there.
On the other hand, it almost makes no difference cost-wise where you stay in Berlin since it is likely you are going to buy the 6.90 euro day pass instead of paying 2.70 euros for single tickets. (Going to Sachsenhausen costs a little more.) Berlin is too spread out to do that much walking.
Why don’t you stay with me? You can follow along with RSS, subscribe to an email feed, see what’s cooking on Facebook, pray that I’ll say something worth remembering on Twitter and if you are really slumming it, there’s always Google+. (I’ll follow you back!)