Turkey was a last-minute impulsion. I bought a ticket to Izmir on the Aegean Coast only the day before I flew out. I figured I would visit Ephesus and then improvise everything else, which is my modus operandi anyway. My idea was to visit all the places on the Aegean Coast I have heard about, but when I saw the first, Kusadasi, I was so repulsed by the crowds, the congestion, and every business catering to tourists that I had to rethink everything, a challenge for my feeble brain.
I’m surprised how busy southwestern Turkey is. Apparently the season peeters out at the end of the month, so for now the climate is perfect, just on the hot side of warm, and the exchange rate pretty juicy for us white-trash Americans, three lira to the dollar.

I paid with a genuine fake 20 euro note. I figured they wouldn’t mind. 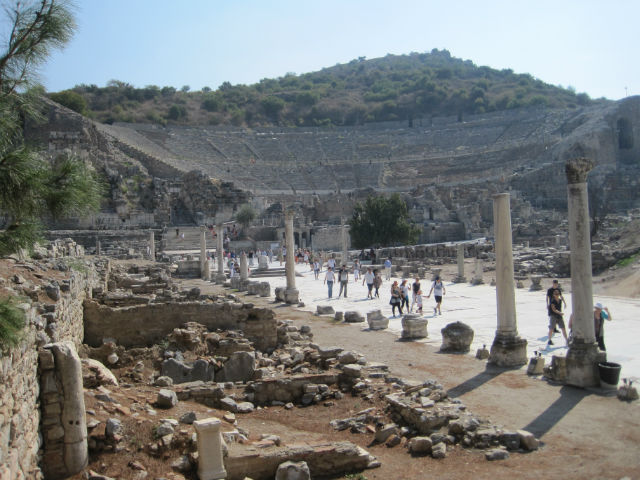 Ephesus, some of the best preserved Roman ruins in the world. Elton John once played to 25,000 people here before the government realized huge crowds were ruining the ruins.

When I got off the train near Ephesus in Selcuk a man approached me and asked if I needed a place to stay. I am all about following strangers to their homes, so I let him drive me to his place in the middle of town where I had my own room for 25 lira, about $8.40.
I am becoming a fan of booking.com, especially for cheap last-minute hotels. It must be a godsend to those out-of-the-way hotels that can’t count on foot traffic. I could do without all the bogus pop-ups: “Only one room left at this price!” and “8 people are looking at this property!” and “This is the lowest price we have seen in the last 40 days!”
When I checked in at Blue Lagoon Hotel in Marmaris, I found out that I really was getting the last room, and somehow it was a suite with a view. 11 euros. You can’t get a dorm bed for less. The Blue Lagoon attracts a rough crowd, though, almost all British. The fact a tattoo shop sits in the middle of the lobby is an unmistakable sign.
The only reason I had a hotel is because my Airbnb host was incomunicado. I booked, I emailed, I messaged, I called, I went, but I didn’t have a street number and I gave up. I emailed airbnb about it, and they were predictably slow to respond, leaving me flailing in the wind. I fumed about all these companies that don’t spend two cents on customer service, whose self-help FAQs on their websites are woefully inadequate, that claim they are merely the marketplace and you are on your own, but to my surprise the next day they refunded my payment and gave me a $50 voucher, good for one year. Kudos to you, Airbnb.
After Kusadasi it was nice to see the natural beauty surrounding Marmaris, but the problem with Marmaris being such a tourist haven is that as you go away from the center, you lose all chance to live like locals do, meaning there is no place where normal Turkish people would eat. Nowhere. I ended up having stale borek from a supermarket. I am always on the lookout for lokantasi (cafeteria) food: white beans or chickpeas in sauce, bulgur, pilav, manti (small ravioli), lentil soup—that’s what my Turkish grandmother would always make for me if I had a Turkish grandmother. 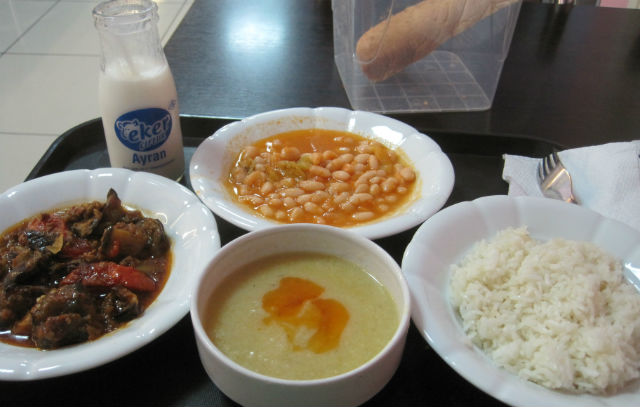 White beans, pilav, lentil soup, eggplant, and ayran, a watery yogurt drink, all for 8 lira, about $2.75. 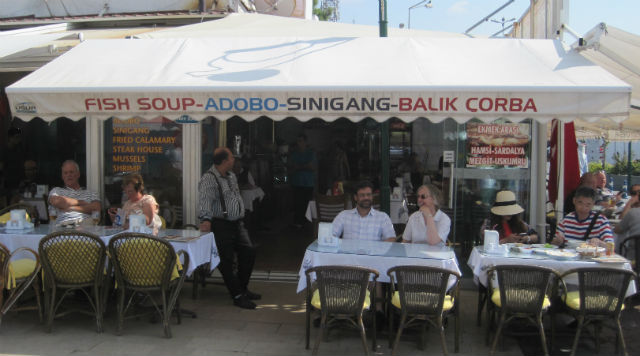 Sinigang?! Adobo is a common Filipino food, but I have never seen sinigang (a kind of soup) outside the Philippines, and why in Kusadasi? Filipino sailors? Can’t be. Mysterious. 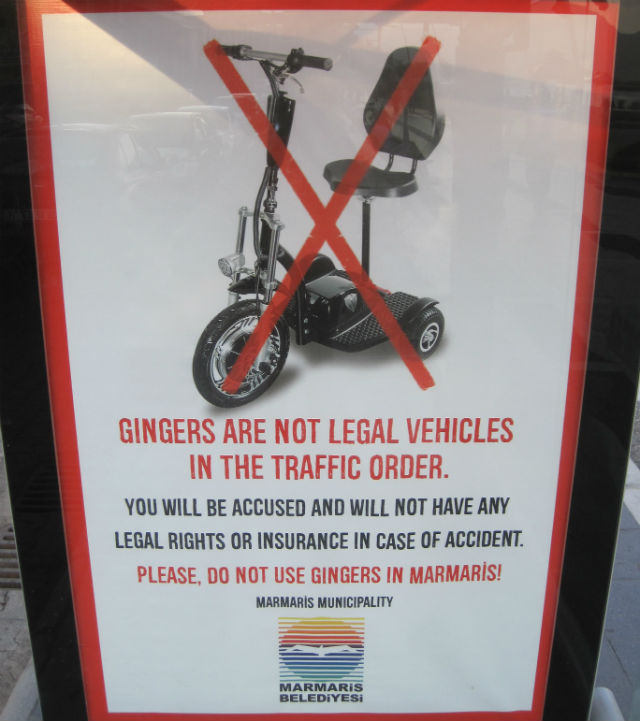 Look at Marmaris laying down the law! Meanwhile, kids on motorbikes zoom around without helmets while yapping on their cell phones, but you putter about town in your “ginger” and you will face the wrath of Marmaris! 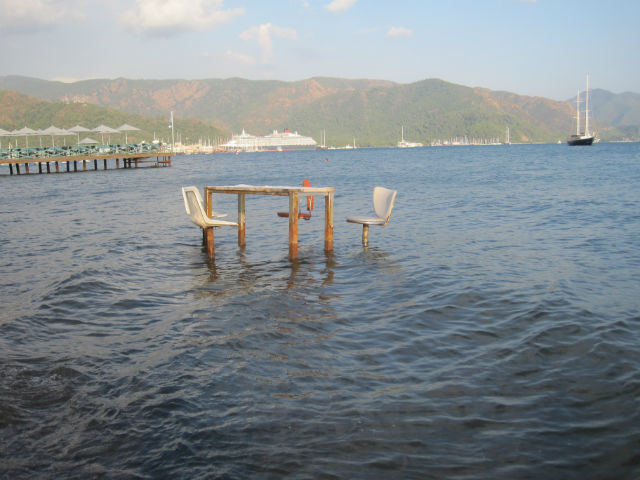 This looks like a setup for a Monty Python skit. 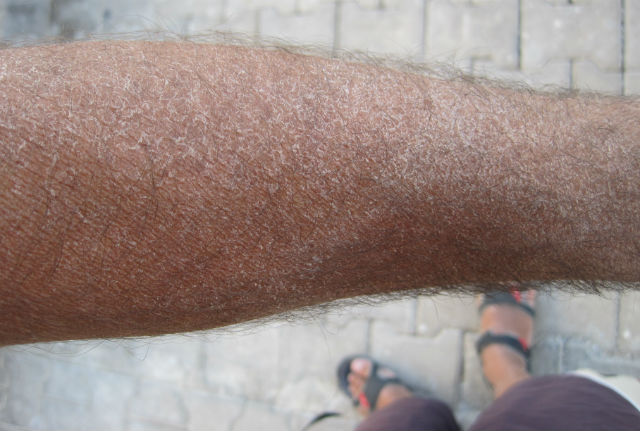 This is what my skin looks like when I come out of the sea and also out of the shower in Turkey. 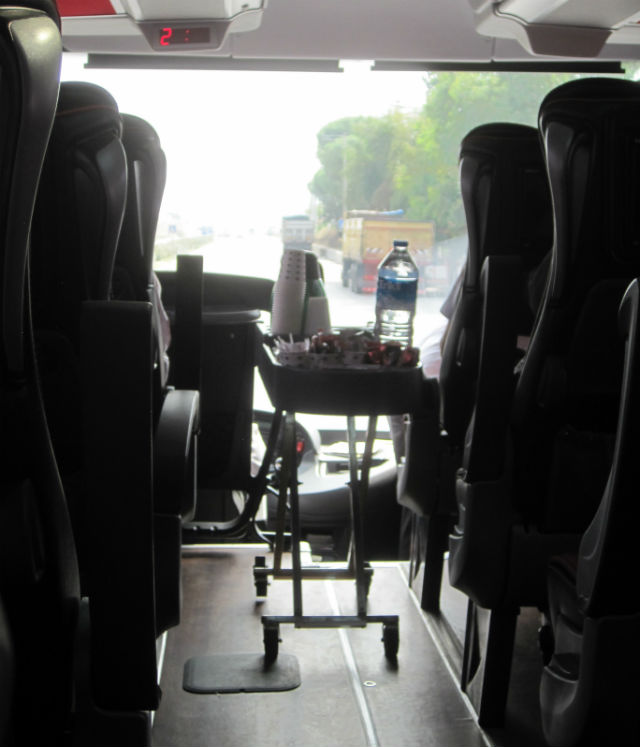 Two things I had never seen on a bus: a beverage and snack trolley cart normally only seen on airplanes… 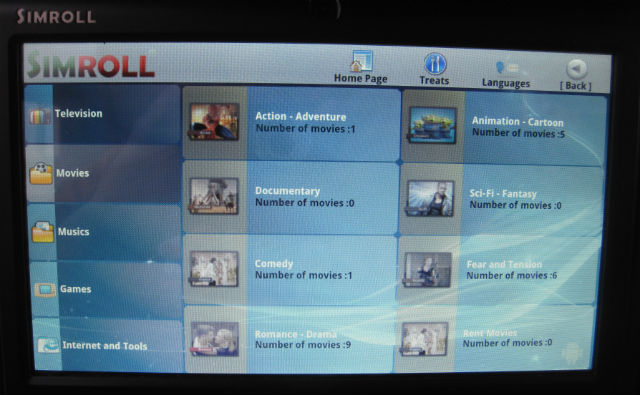 …and a rear-seat TV screen, normally only seen on airplanes, though the internet was lacking. I like the movie genre on the lower right: “Fear and Tension!”

That was the first and last time I took a bus. I hitchhiked thereafter, and in the next blog post you will see the beautiful girl who picked me up (with her boyfriend, but still.) In fact, the next blog post will be more entertaining than this one. Apologies.
PRACTICAL INFORMATION
I flew from Berlin to Izmir for 145 euros one way on Sun Express. If I had waited two more days, it was 99 euros, but I had to get out of Dodge.
For Americans a Turkish visa is $20 if you prepay online or $30 if you show up without it. When I checked in for the flight, the agent asked to see it, but didn’t ask about an onward ticket.
If you are going to Ephesus, you can take a train straight from the airport to Selcuk, avoiding the Izmir town altogether. The only downside is you will likely have to stand for the whole hour it takes. 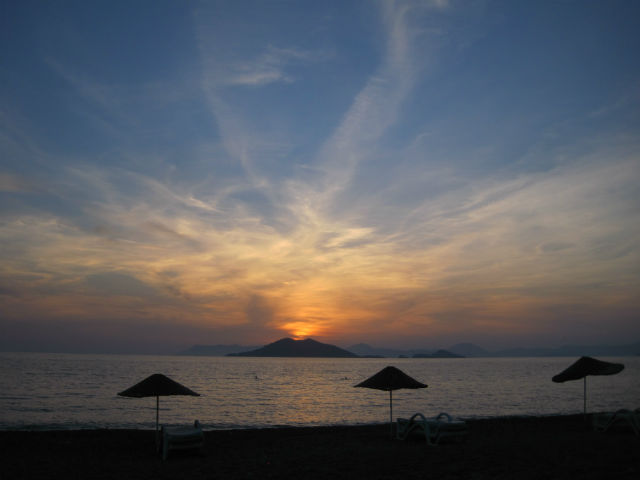