Question of the Day: Are there more barber shops in Turkey or pharmacies in the Philippines or stray cats in Egypt? 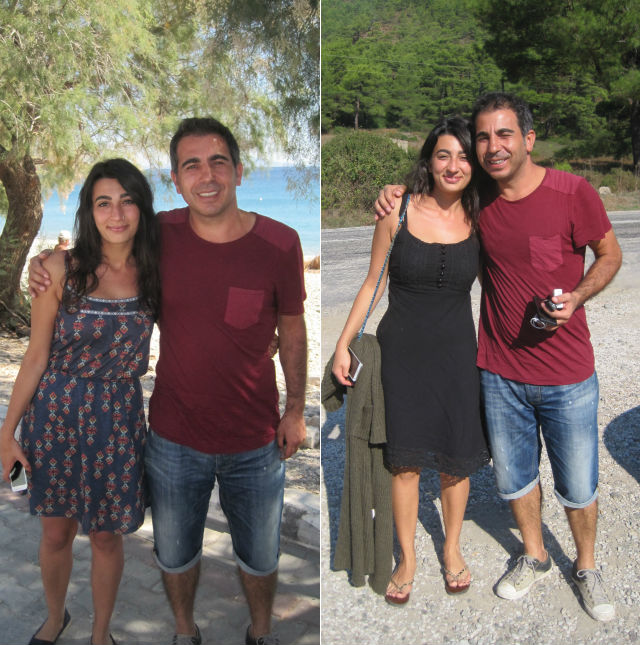 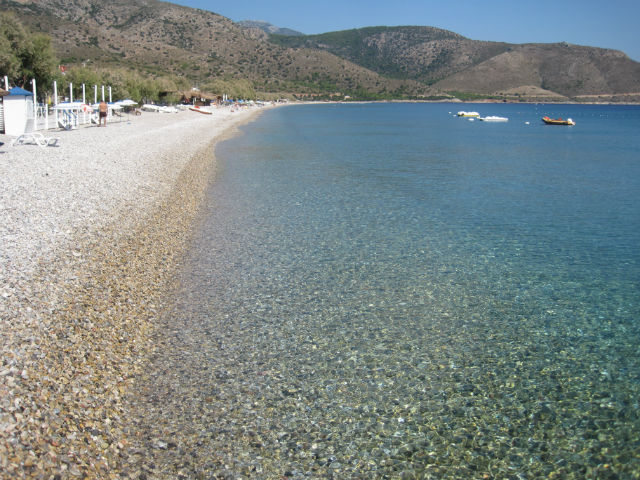 They took me here, Palamutbuuuuuukuuuuuuu!

As I showed in the previous blog post, Turkish buses can be state-of-the-art amazing, but I had an itch to hitch. I hitchhiked about 400 miles (650km), all of it surprisingly easy. I even had two Turkish women pick me up once, which no one would expect. As a tactic I didn’t velcro the USA flag on to my backpack as I usually do; I wasn’t in tune with local sensibilities enough to feel OK about waving the flag.
The longest stretch was the last, 350km from Fethiye to Izmir. The day before 100 people were killed in Ankara in a bomb blast, mostly Kurds. Two of my drivers thought it was the work of the government. One of them was Kurdish. I wondered how well Kurds fit in when they are in western Turkey (where the jobs are) and so I asked if he had an accent when he spoke. He said people knew instantly when he opened his mouth that he is from the east. I asked if Kurds had distinct facial characteristics, and he lifted his sunglasses to show a formidable caterpillar eyebrow, plus he said Kurds have big noses. My nose was bigger than his. Maybe I have some Kurdish in me. 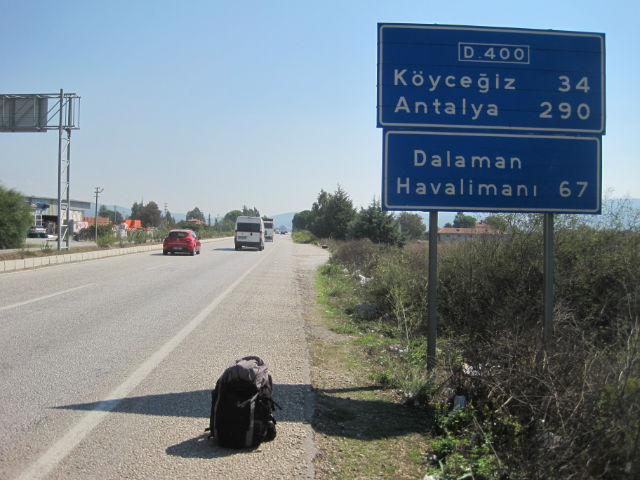 I’ve had such a long run of fruitful hitchhiking, so many good years, that I’m long overdue to be robbed or maimed or I don’t know what, but no, in Turkey it was all rainbows and unicorns.

From Marmaris I thought of making a day trip 70km out west to Datca (pronounced “datcha”) and Palamutbuku, but I was pleased with myself that I checked out and didn’t let inertia take over as the area became my favorite place in Turkey.
The fact that I made the right decision was made easier by my traveling light. If I had a lot of baggage, I wouldn’t have done it, or, since I was surrounded by British at the hotel, I should use their expression: “I couldn’t be bothered.” It’s the white flag of surrender for traveling when you start saying that too much. This is why you pack light, why you don’t have a bag with wheels because they add too much weight, why you don’t want to be overweight in any sense.
I got a ride halfway to Datca with a guy working at a remote hotel, and he left me in a desolate place, but then a kind young Kurdish couple picked me up, Mustafa and Gamze. Gamze was spellbinding, a raven-haired beauty with olive skin, full eyebrows and a dazzling smile. They squeezed me into the back seat next to a plastic bag bursting with colorful, interesting-looking lingerie until Gamze noticed it and became embarrassed, quickly snatching it away and tucking it under some other bags.
They were not only going to Datca, but 20km further west to Palamutbuku, which is supposed to be the most beautiful place on the peninsula, so I wasn’t going to let the opportunity pass. This is why you pack light, why you… 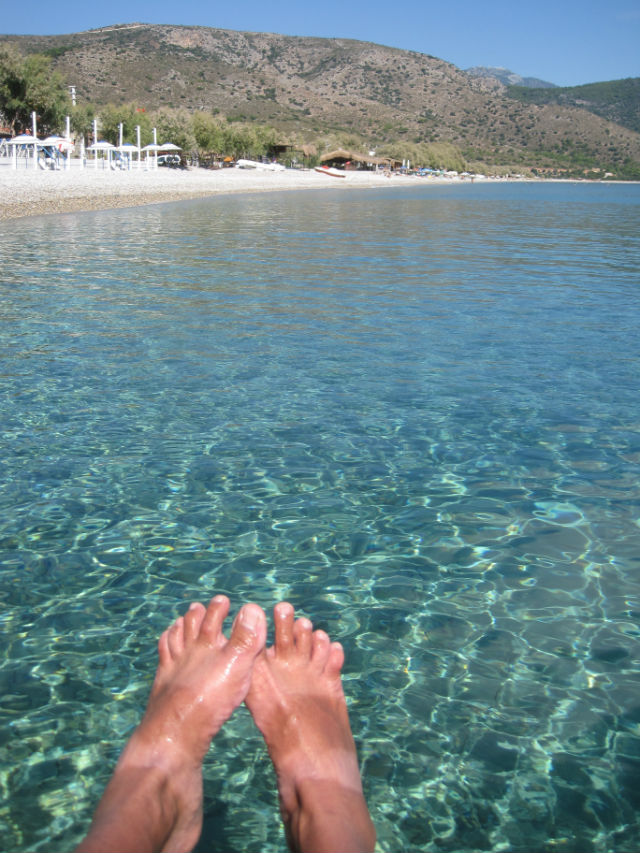 In Palamutbuku I sat at the end of a pier like a Turk, voraciously eating sunflower seeds while dipping my feet in the brilliant Aegean Sea. The water was crystal clear perfect, if a tad chilly. Well, I found it chilly. A Central European would find it very pleasant and a Norwegian would be scalded with third degree burns.

The receptionist at my pension in Datca was impressed when I told him I hitchhiked everywhere, but his mood darkened when I told him a Kurdish couple took me. He went off on the Kurds, saying, “They do all the bad jobs: sell drugs—any mafia business…all crime!”
He went on. I patiently listened. I proposed that maybe it would be better if the Kurds had their own country, a Kurdistan in the southeast where they are a majority. He shook his head. “No, they are too smart. They don’t want to be independent. They get everything free from the government: housing, school—they get everything! They don’t pay taxes!” 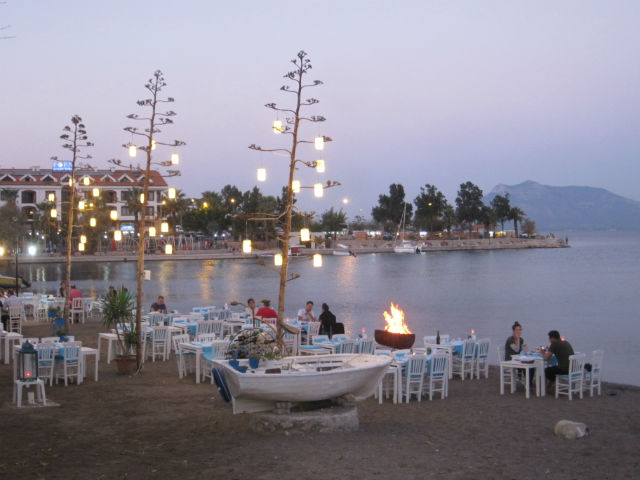 Cheesy yet quaint scene at one of Datca’s small beaches. 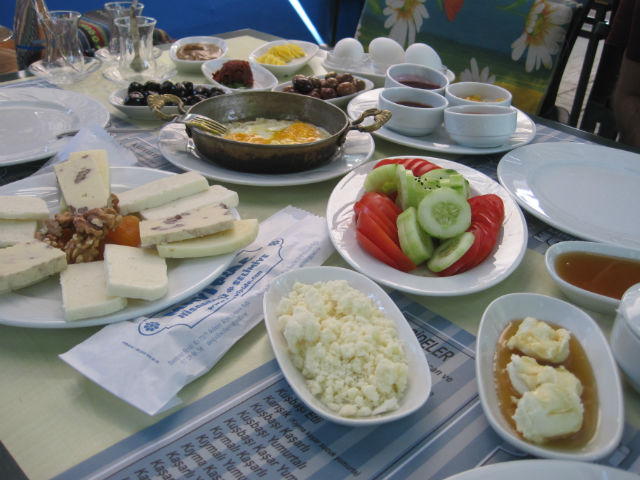 When Mustafa and Gamze took me the second time, they invited me to a Turkish breakfast at a pretty place by a river with ducks and eels, both fighting for food thrown their way. The quality of the food was impressive. I don’t even eat tomatoes at home, but here they have a full taste, just like the honey—and how did I manage to exclude the sublime tahini from this photo? 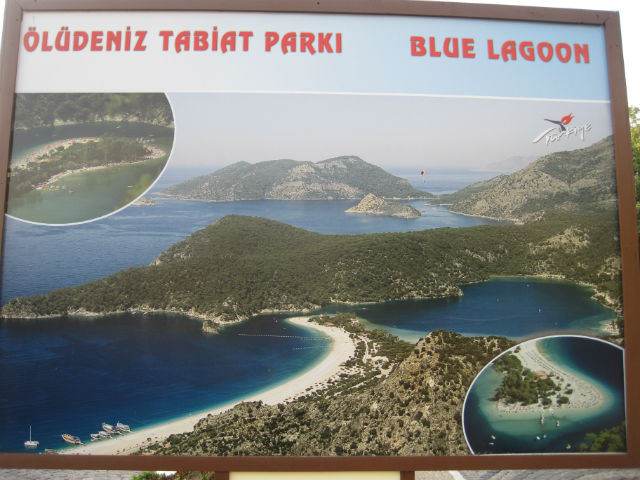 A photo of a photo of the Blue Lagoon is more dramatic than being on the ground, but it’s a beautiful spot ringed by mountains and the water incredibly clear. What a location! Now how can I get rid of all the people?
I hitchhiked in the dark from Oludeniz back to Fethiye with a guy who said he was a technician. I told him I was swimming at the Blue Lagoon and he said that’s where he is a technician, to keep it clean, I presume. It was amazingly clean and clear, just like Palamutbuku, but tons of people use the water, so how can that be? Communication between us was too hard to pursue this. 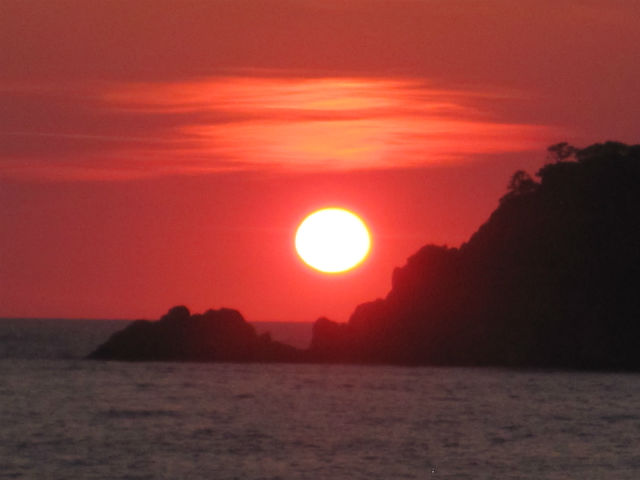 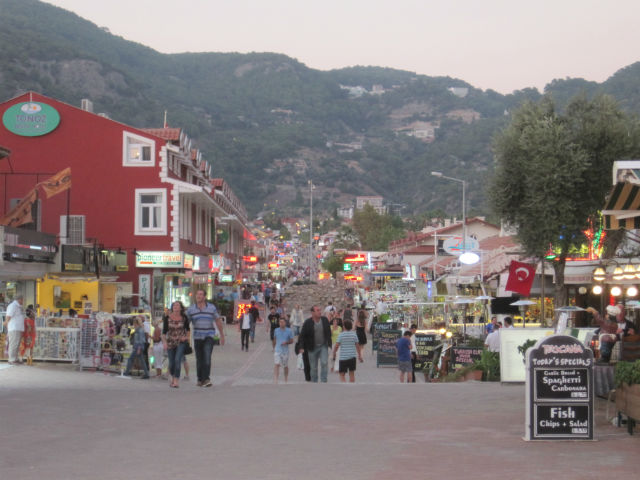 The mean streets of downtown Oludeniz. Every other restaurant touts their “full Scottish breakfast” as scads of British are about, engrossed in their beers and Rugby World Cup. The British are unrivaled masters in drinking and sports commentary. 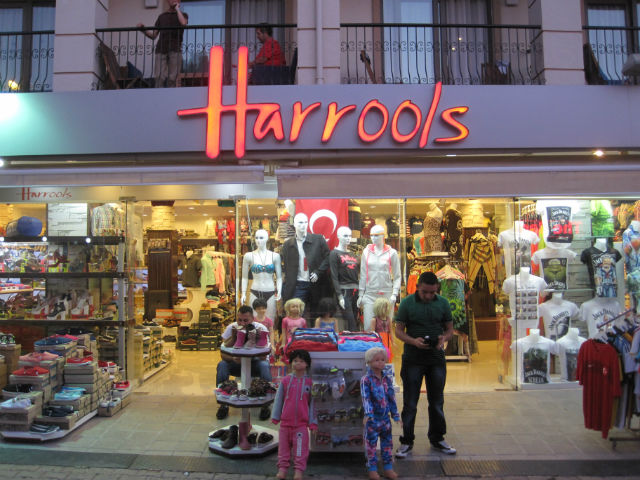 Had to do a double-take when I saw “Harrools” of Oludeniz. 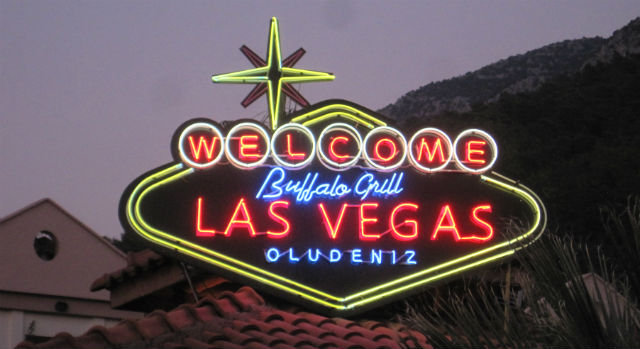 PRACTICAL INFORMATION
Sirin Pension in Fethiye was only 10 euros for a room including breakfast. Booking.com
In Datca I got a room at Thetis Pension for 40 lira (US$13), as reasonable as I could find. Well, I found it reasonable. A Central European would find it a bargain and a Norwegian would book the whole hotel just because they could.
In Izmir I stayed at an Airbnb place for $11, a great deal. Airbnb sends an email before your visit encouraging you to get to know your host, but often that is the last thing I want to do. If I want to get to know my host, I use Couchsurfing. I feel zero responsibility to hang out with my host, unlike CS. If we have a nice conversation and get along, that’s great, but I have no obligation to make time to socialize. That said, I always chat with my hosts, if they are in the mood.
Why don’t you stay with me? You can follow along with RSS, subscribe to an email feed, see what’s cooking on Facebook, pray that I’ll say something worth remembering on Twitter and if you are really slumming it, there’s always Google+. (I’ll follow you back!)