Note: I’m slow to put up blog posts, but quick to toss up some non-boring photos on my Instagram. 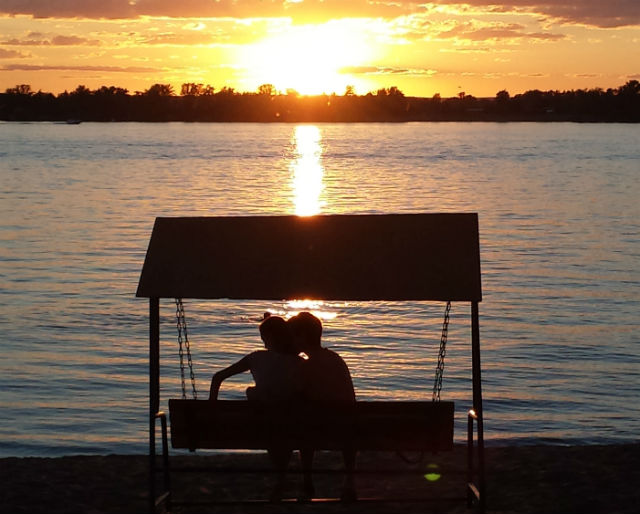 Ah yes, here it is, the classic scene at sunset of the boy trying to kiss the girl as she desperately squirms away. Timeless.

Look, this is a little long and I’m not going to apologize for it. You try spending a month in Russia and have only a little to say. Yes, I’m challenging you. Please come. It’s lonely here. In over a month of traveling I have yet to see a single foreign backpacker. Not one! 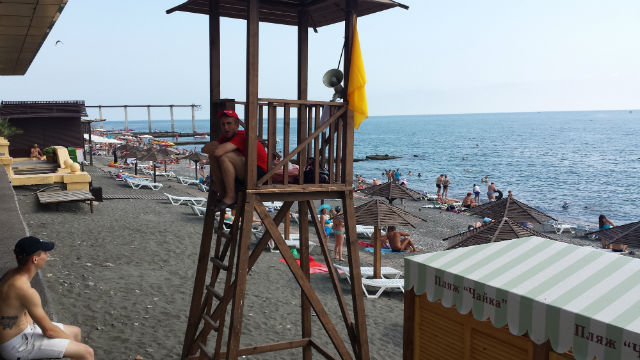 This lifeguard in Sochi on the Black Sea could care less how many people are drowning behind him. 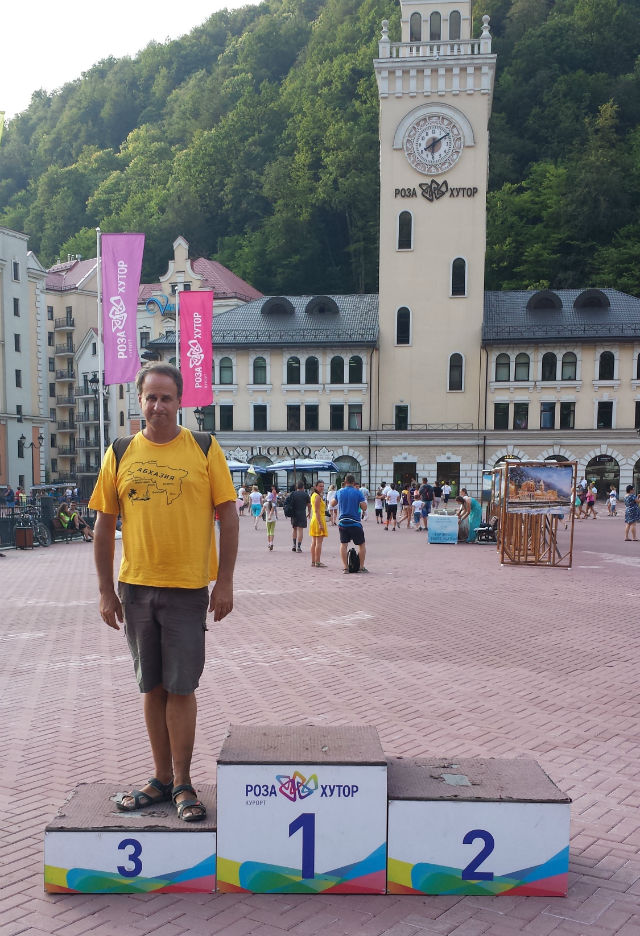 The guy taking this photo implored me to stand on the 1st place podium, but it wouldn’t have felt right. 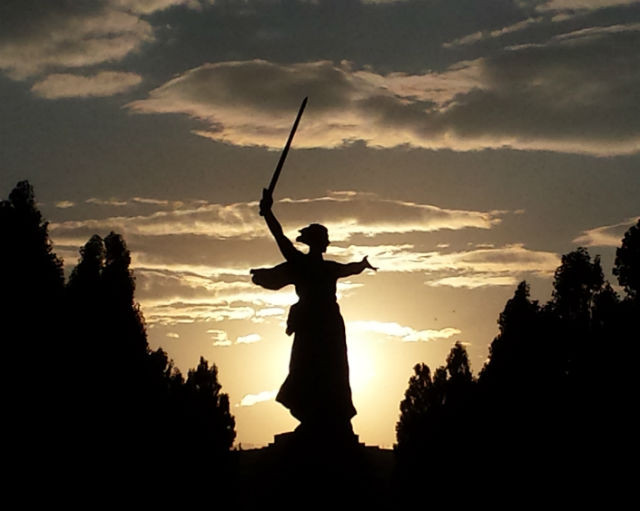 Nearly everything I thought I knew about Russia has been the opposite. This is my fourth time here; you’d think I know a thing or two by now, but it’s my first time getting out of the Moscow and St.Petersburg orbits, so it feels very fresh to me.
I expected the highlights of Russia were going to be in the so-called heartland, which is why I made the route I did before turning east: Sochi/Krasnaya Polyana, Krasnodar, Rostov-on-Don, Volgograd, Samara, and Kazan.
Those middle four are some seriously run-down towns. Kazan is easily the most interesting, but the competition isn’t fierce. Krasnodar has but one beautiful street. Volgograd has the fabulous statue, The Motherland Calls, and Samara has some cool old wooden houses in extreme disrepair, but the whole Volga region is elusive in charm when you back away from the river running through them. (I am open to criticism on this. Am I measuring towns by their landscaping, shallow aesthetics and fleeting impressions?) 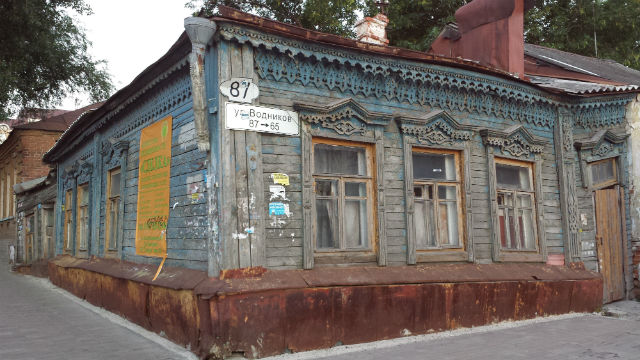 One of many old wooden houses scattered around Samara that are usually tucked away behind head-high weeds.

It’s the places I thought I’d just blow through eastward that were the most interesting: Ufa, Chelyabinsk, Yekaterinburg, Tyumen, and if it ever stops raining here, maybe Novosibirsk. They all seem much wealthier, happening, dynamic, and, by coincidence, the girls seem to wear less and less clothing. More than once I have seen women wear—I’m hesitant to call them clothes—they are more like sheer pieces of fabric like those useless see-through curtains that are between the window and the real curtains, draped over their head. To be sure, Russian women like their sheer clothes. I feel like I am wearing x-ray glasses. Maybe If I lived in a frigid place most of the year, I’d be wearing 10% opaque curtains, too.
What was I talking about again? Anyway, let me counter some popular opinions:
Myth: Taking the Trans-Siberian or Trans-Mongolian Railway is a great way to see the whole country.
Reality: This is insane. That’s like saying driving (highway) I-5 all in one go is a great way to see California. I mention this in passing now because my next blog post will be all practical information and why this is an expensive, bad idea. 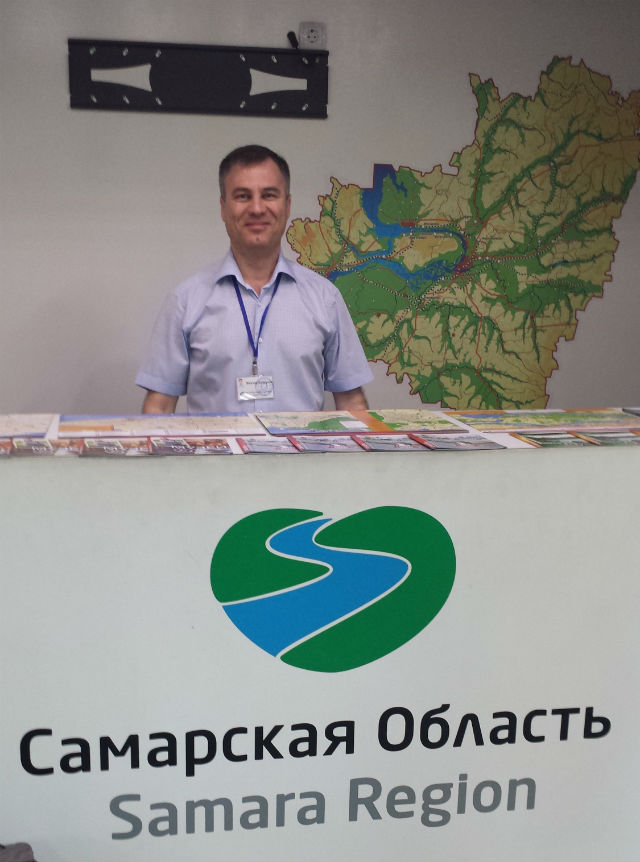 Myth: Russians are aggressive, hot-tempered, stern, unfriendly people you practically have to pay to smile.
Reality: I keep saying this and I know no one believes me, but the word for Russian people is gentle. I’m sticking with it. Three quick anecdotes:
Quick anecdote #1: In the Samara train station there is a tourist information booth. It’s incredible it exists. A tourist will come “From time to time” I was told by this kind man. He spoke a meticulous, halting English, and was beyond pleased to be able to help a native English speaker. (The first thing I always ask is if I can drink the tap water.)
We had a long conversation and as I was about to go, he asked if he could recite a poem. This caught me off guard. He said, “It’s from Cole Porter.”
What is this thing called love?
This funny thing called love?
Just who can solve its mystery?
Why should it make a fool of me?
Imagine that happening in Union Station in Los Angeles for a Russian tourist. You can’t. It’s unbelievable.
Quick anecdote #2: I had a train that arrived at 10pm in Saratov and I wanted to take an 11pm train onward, but the station was crowded and the number I pulled for my turn at the ticket window was 100 behind, meaning I’d never make it. I asked the train station information woman in the main hall what I could do, and she hopped out of her chair, closed her booth, and took me to a ticket counter to get a cashier to help me. So kind! Provodniks (conductors) on the trains, every story I read they are always surly or, at best, aloof, but I’ve never had a sour or unhelpful one.
Quick anecdote #3: I was in a distant suburb of Yekaterinburg and I stepped into a small “produkty” (mini-market). I was starving, and they had some ready-made sandwiches behind a case that for some reason they couldn’t sell. I kept walking around the store to see what they had. Seeing my frustration, the cashier closed her register, the only one in the store, and, taking my hand, led me around the aisles showing me what I could eat.
After communicating that I couldn’t heat this nor did I have hot water for that, she brought me to the front of the store, still hand in hand, and through the window pointed out nearby restaurants. Meanwhile, the people waiting at her register were patiently watching this, maybe thinking I was mentally disabled.

This was right on the Abkhazia-Russia border. Free business name for you entrepreneurs out there. You’re welcome.

People are gentle! They don’t jaywalk. Cars stops for pedestrians (I can hear Russians saying, “We do?”) When they see you are a distant traveler, they are kind and welcoming, often. I am going to go out on a limb and also say men respect women more than most places. I never see guys catcall girls, and I doubt my lack of Russian prevents me from really hearing what’s going on. 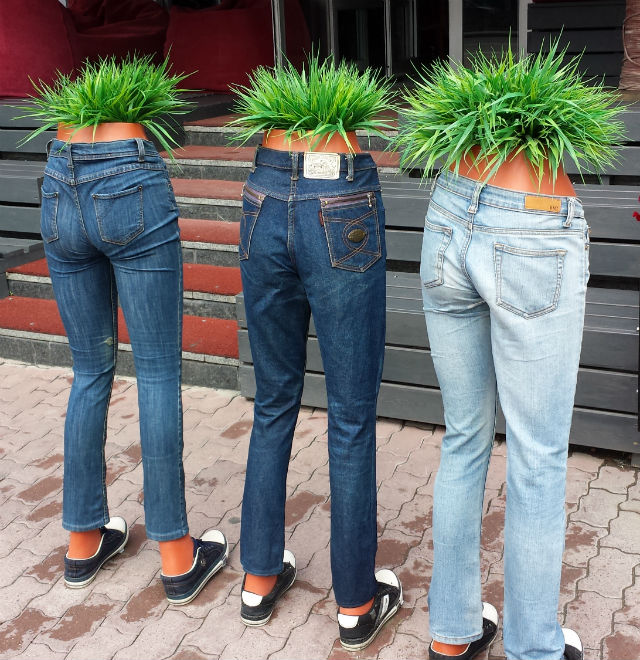 “Pants Plants”, another FREE business idea from The Dromomaniac!

Myth: Russians don’t speak English.
Reality: This is actually true, few speak English, but many people are quick to whip out their phones and use Google Translate (works offline, too) and are patient. I stayed at a place in Abkhazia where it was tough to communicate, but the owner managed to say that I should wait for two girls from St. Petersburg to arrive, which is shorthand for “it’s our best chance” as St. Petersburg is far and away the most cosmopolitan of Russian cities.
I take full responsibility for not being a diligent student of Russian, but how can I tear myself away from Jiminy Glick interviewing Steve Martin? 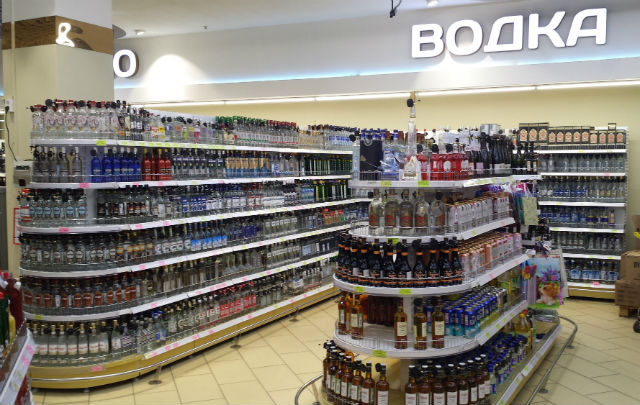 This was a good-sized supermarket, OK, but this much vodka?! This says a lot. It reminded me of the dried ham aisle in Spain and the salsa aisle in Texas. 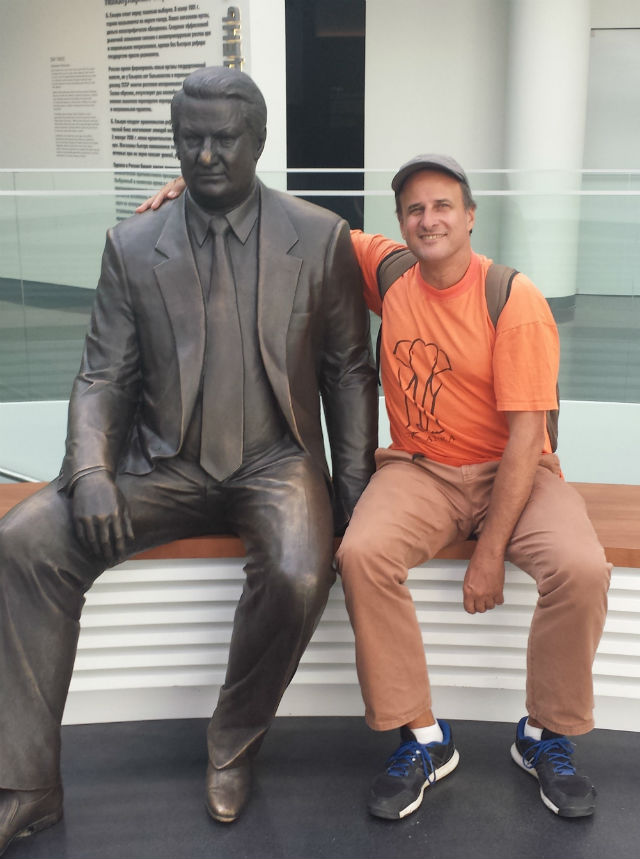 Boris and I were comparing tans until security threw me out.

Myth: Boris Yeltsin is remembered and denounced in Russia as a bumbling fool.
Reality: In his hometown of Yekaterinburg, at least, he appears to be beloved. There is a very impressive Yeltsin Center where I spent hours going over his legacy. It may lean towards hagiography, but the 1990s were tough, nearly impossible times in Russia.
What is the memory of Boris Yeltsin in the west? It’s probably standing on the tank as much as the drinking, presiding over the economic downturn, the subsequent lower status of Russia in the world after the breakup of the Soviet Union, mistrust of democracy and change—all of which begat Putin.
Did you know there is a band from Missouri called “Somebody Still Loves You Boris Yeltsin”? This is their best song, Pangea. 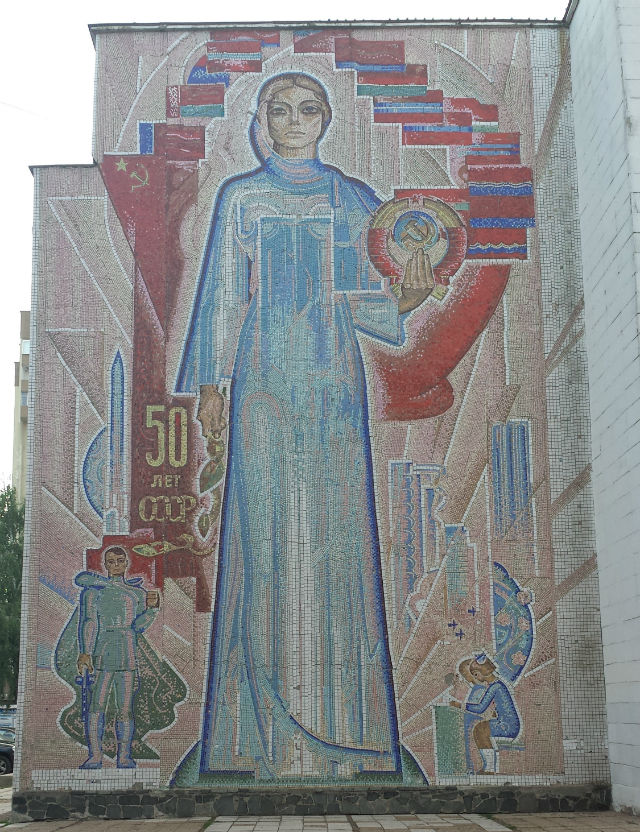 I am a sucker for this stuff. I love all the patriotic Soviet mosaics, murals and statues.

Myth: You cross the mighty Ural Mountains and—voila! You are in Asia with its endless taiga of birch forests.
Reality: There are no mountains that I saw, no grand pass where you reach a summit and suddenly you are in Asia. I didn’t even notice a change in elevation. I am still waiting for the taiga. I see lots of beautiful wildflowers, pretty wooden homes in old villages, patches of forest, but mostly swampy, boggy, fallow land. My hunch is that if it exists, it is going to be on the other side of Lake Baikal. 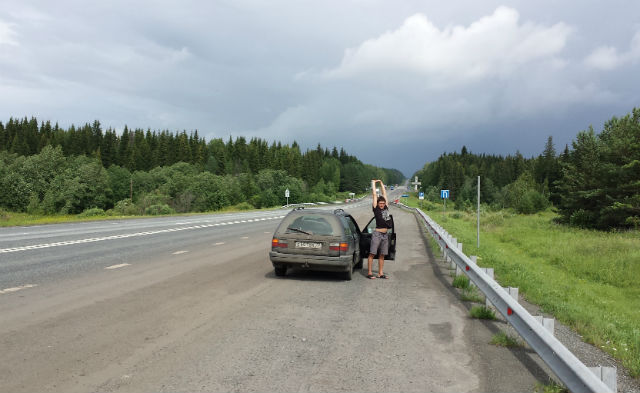 The view when you first “enter” Siberia. Could be lots of places. This was my blablacar ride share. I am eager to get out of the urban landscape. By now I have been in 11 of Russia’s 12 largest cities. Nizhny Novgorod, stop trying to hide. You WILL be visited! 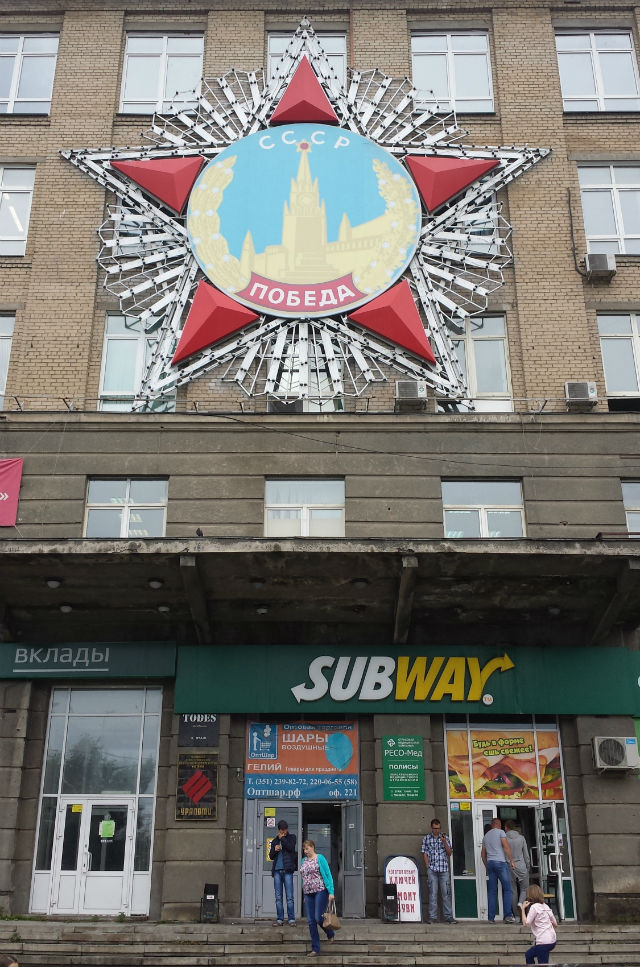 I love juxtapositions of new and old, sacred and profane, apples and oranges. Above is an enormous Soviet-era “victory” star. Below is an American fast food chain that has exploded in Russia, even more than KFC, Burger King, and McDonald’s. This is in Chelyabinsk. You may not know Chelyabinsk, but you might recall the meteor that crashed down a few years ago in Russia. That was near Chelyabinsk.

PRACTICAL INFORMATION:
The next blog post is all about practical information, but I’ll say a quick thing about flights.
To minimize backtracking I flew into Sochi on the Black Sea coast, but the cheapest flights, if coming from the west, are probably on Pegasus via Istanbul (the Asian-side airport) to Krasnodar. flydubai flies to Yekaterinburg; that could be an interesting backdoor to Siberia. They also go to Samara and Rostov-on-Don. My intention is to go to Vladivostok and then fly back across the whole country to St. Petersburg, and this should cost less than $250 for a 9+ hour flight. Russia is quite reasonable. Last year I flew from St. Petersburg to Bulgaria for not much more than $100 one way, and that’s not a short flight either.
Sochi might not have been the best place to start, but I loved all the horror stories of the Olympics preparation as epitomized by the hashtag, #sochiproblems, and was curious to see it. Now that the Olympics are over, there is some excellent infrastructure, but some serious white elephant facilities that look ridiculous next to the Black Sea—–which is a ridiculous place to have winter Olympics anyway.

This is the first city I came to in Siberia, Tyumen, and was surprised to see water skiing. It’s the oldest city in Siberia, 430 this year, and has the highest GDP of any town in Russia, I read. It should be the farthest north I will get in Siberia, so probably not much frozen tundra on this trip.