I am not a big souvenir guy since I have to carry everything around that I buy or spend a lot to mail it home, but this towel buckled me.

Say you’re Boris from Smolensk. You work hard at the petrochemical kombinat, provide for your lovely wife, Svetlana—why is every other woman in Russia named Svetlana?—and kids, and you want to take your precious summer vacation by the sea. Where do you go?
With the ruble in its present dismal condition, western Europe is out. Traditionally cheaper destinations like Turkey and Egypt are out because of recent tensions involving downed planes. Crimea is now Russian, but until “Putin’s Bridge” gets built connecting it to mainland Russia, you have to fly in and out to avoid Ukraine. Sochi on the Black Sea is the next logical choice, but why go there when you can nip over the border to the breakaway Republic of Abkhazia? Same coast, more exotic, and cheaper.
I learned all this when I set foot in Gagra, the first resort about an hour over the border, which is packed with Russians. Gagra is hardly a town in the civic sense as the entire length of it caters to tourists and nearly every home advertises rooms for rent, but no one cares, especially Boris. 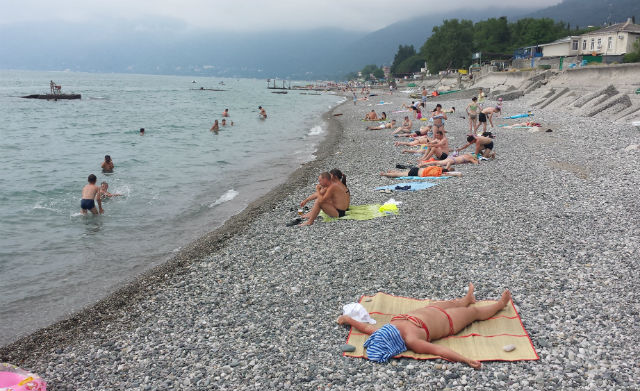 The beach in Gagra isn’t packed because it’s so long and spread out. Not much sand to be found. The water either had jellyfish or a lot of scum floating on top, but a Russian couple I told this to looked me up and down and gave me the “What a wimp!” look. 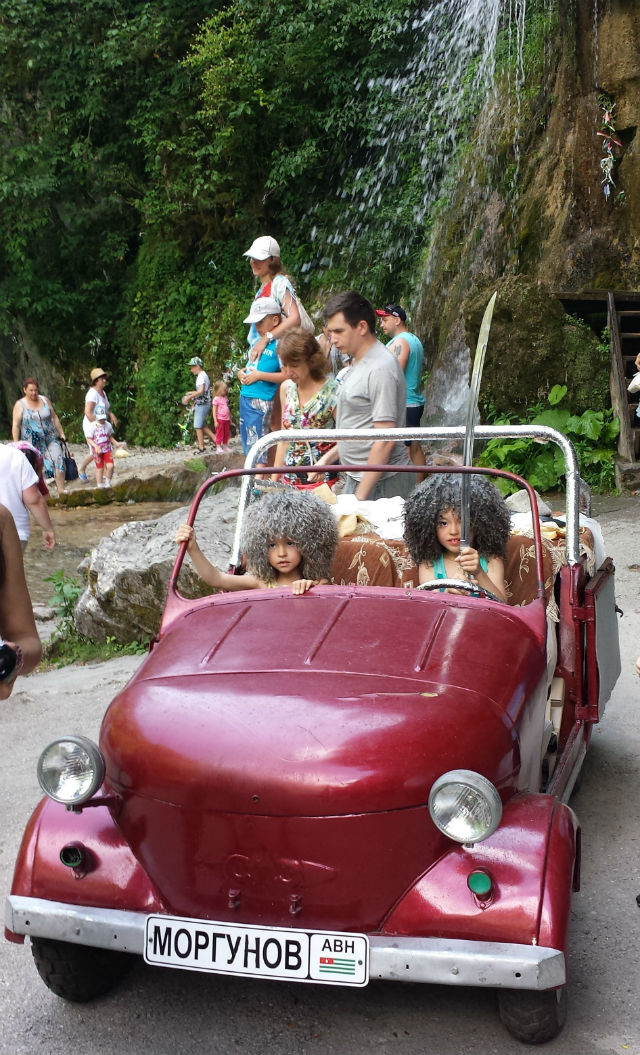 This is genius. The car, hats and sword have nothing to do with anything, but park this where tourists are, charge less than a buck, and few can resist.

I had a taste of mass Russian tourism when I went to Lake Ritsa on an “excursion”, they call it. Everyone gets packed into vans and whole convoys careen up the mountain. By having the front seat I earned the driver’s scorn for wearing a seat belt. He kept scolding me until he tired of my sissiness.
I naively thought the whole shebang was just going to be transport, but it turned out to be a Chinese-style mess with coordinated stops to buy honey, alcohol, and souvenirs, and to pose with endangered animals in chains. Also, these kinds of excursions highlight that Russians love loudness. If there is a beautiful place next to a lake or river, they want Eurotrash dance music blasting to ruin the scene.
The payoff was worth it, though. The water is a special color this time of year as you can see in this short video here if it doesn’t show up below: 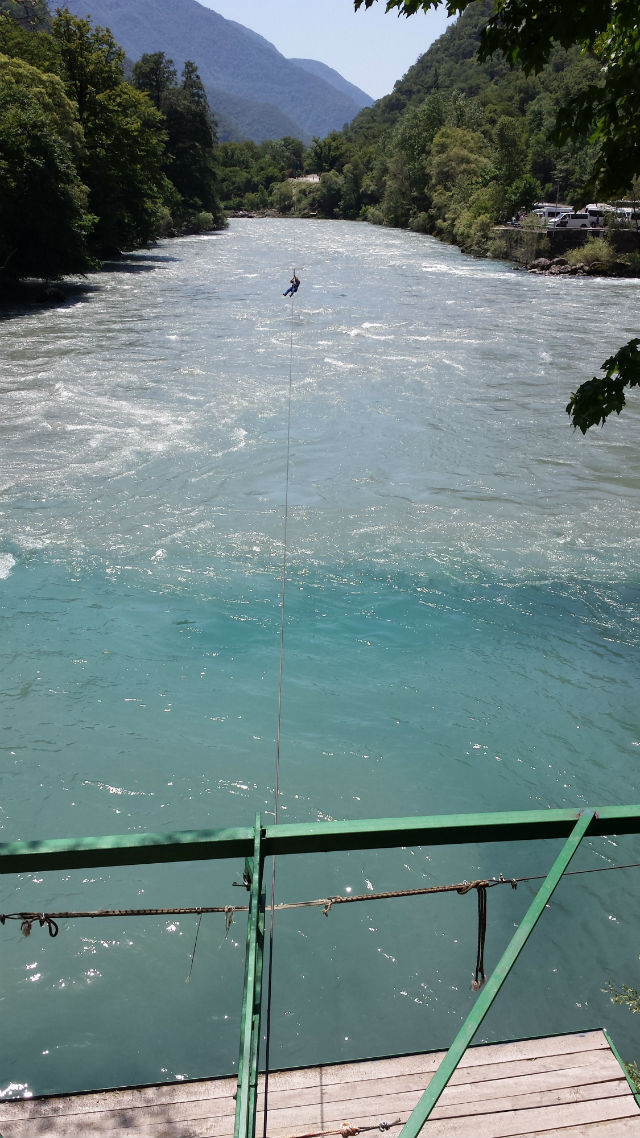 A dude ziplining across the rushing river—and getting stuck. He had done something wrong (what can you do wrong?) and the guys running it were in a tizzy.

Russians had said to me that Abkhazia was like Russia twenty years ago with its crumbling infrastructure. That’s the attraction for a lot of people in this day and age of globalization, including me. It is a nice change of pace to see few western products in Abkhazia; I can only think of soft drinks, snacks and candy. It seems regulation-less in a libertarian dream. People smoke indoors. Young punks race around town with impunity. 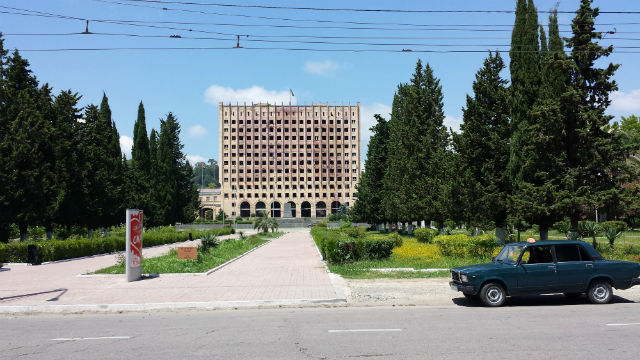 Sleepy downtown Sukhumi, the capital, with a burned out building in the background. It’s funny to see the police self-importantly run their sirens and shuttle dignitaries around on the empty streets. There are hardly any stop lights. Only 250,000 people live in the whole country. 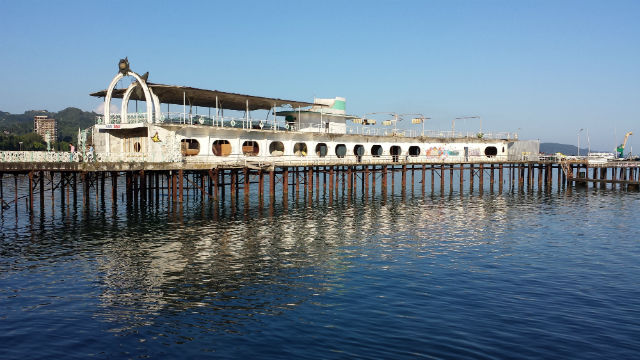 This is one of two concrete wrecks built on the water. During hot afternoons I sat with a cold drink and did some breeze receiving while I typed out award-losing blog posts.

Speaking of the waterfront,this is an interesting article about Abkhazia’s predicament being Russia’s benefactor. The Russians have been eyeing the long coastline of Abkhazia for development, which the Abkhazians are trying to avoid, but good luck with that when you need Russia to cover half your budget. There is video of a lawyer’s car being blown up right on the popular promenade where locals congregate every night. He had been trying to protect the coastline. 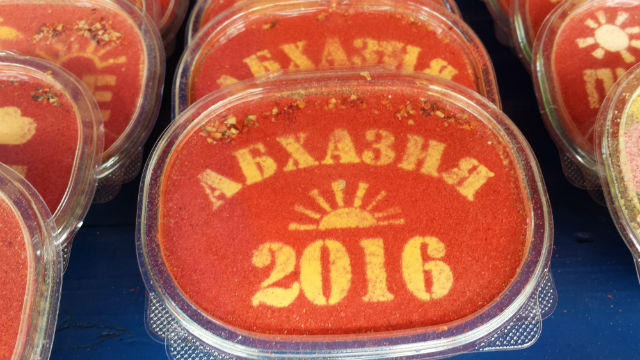 Spices used to spell out stuff.

In Sukhumi there’s a big, popular sprawling restaurant called Nartaa right across from the sea where I met an Uzbek waiter named Rams. He had been studying in Latvia and was lamenting his missed chance in getting a visa for USA. He said studying in an EU country is a pipeline for tons of Uzbeks to get American visas. He said all kinds of things that didn’t make sense, and he couldn’t articulate why he wanted to go to USA so badly except that a friend of his was there and he was making $7 an hour in a restaurant, which was all he needed to hear.
I am always a wet blanket in these conversations to temper dizzying ideas about America being a yellow brick road to riches. I reminded him that you have to pay for accommodation and so on, but he said that the restaurant had his friend sleep somewhere for free and he ate in the restaurant. He claimed there were $500 round-trip flights from Tashkent to New York. I challenged this but he was adamant.
Somehow people like this manage, it seems. Who knows? Maybe people who put their heads down and do what they have to do to make some money succeed, but the problem is that the people who don’t succeed aren’t honest about it to the newcomers out of shame, and the cycle perpetuates. 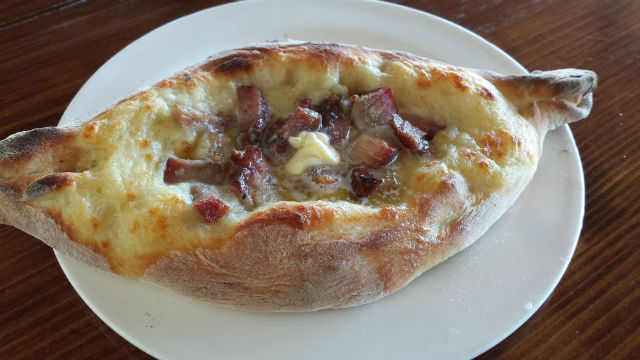 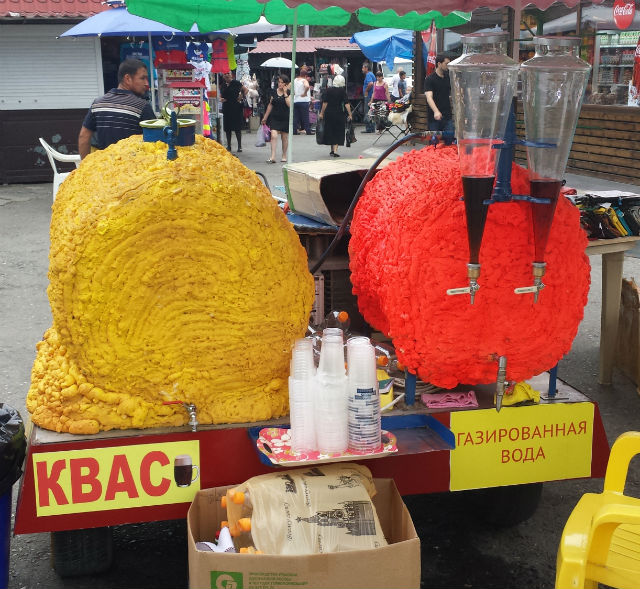 Kvas tanks. Kvas is a very popular fermented beverage across the whole former Soviet Union. Not a fan.

PRACTICAL INFORMATION: (63 rubles=$1)
In a previous blog post I wrote about entering Abkhazia without a visa, but it may be easier to enter from the Georgian side.
Airbnb has hundreds of listings for Abkhazia, believe it or not. Like in Russia, sometimes hosts will want you to make contact with them through the site, but pay in person. Also, like I wrote before, if I do pay through the site, I only book the first night through Airbnb and then ask the host how much if I pay in person. In Sukhumi I paid 10 euros (740 rubles) on the site and then in person, 500.
Only rubles are used in Abkhazia, though there are many places to change dollars and euros. I saw plenty of ATMs, too, but I am not sure if they will work with international cards. I doubt it.
Getting around the main places in Abkhazia is easy. Sukhumi to the border (2-3 hours) is 150 rubles in a bus and 200 in a van. Getting around town is about 10 rubles for a bus and 15-20 in a marshrutka, which is a smaller van or minibus. 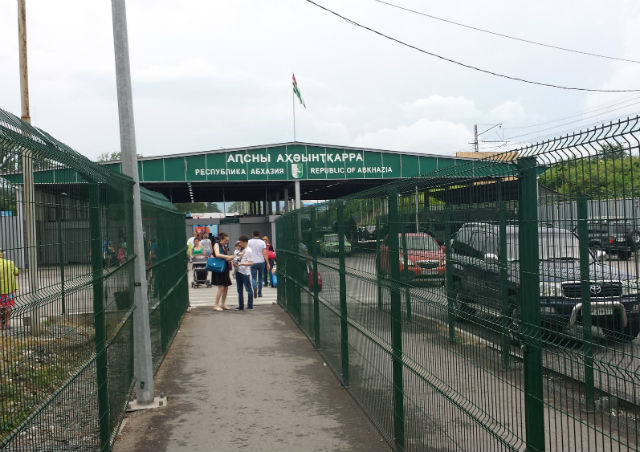 Leaving Abkhazia to go back to Russia. It felt like a return to civilization, which was bittersweet.