Greetings from Sukhumi, Abkhazia. Abkhazia is a breakaway republic with no American diplomatic presence as I explained in my previous, award-losing blog post. Having to be extra paranoid about not losing my passport reminded me of visiting Vietnam in 1992, the high water mark for paranoia. The problem of not having a U.S. consulate, means, in practical terms, if I lost my passport, I would be in serious trouble with no simple, quick or inexpensive way to get out of the country.
In 2016, I can at least communicate problems immediately via the internet, but back then, I was on my own. No consulate was one worry. Since this was pre-ATM, everyone traveled with travelers checks, but those couldn’t be used in Vietnam either. No debit cards, no credit cards, no cell phones, crazy-expensive international phone calls—–$3-4 a minute to USA, often—–and no one to turn to. 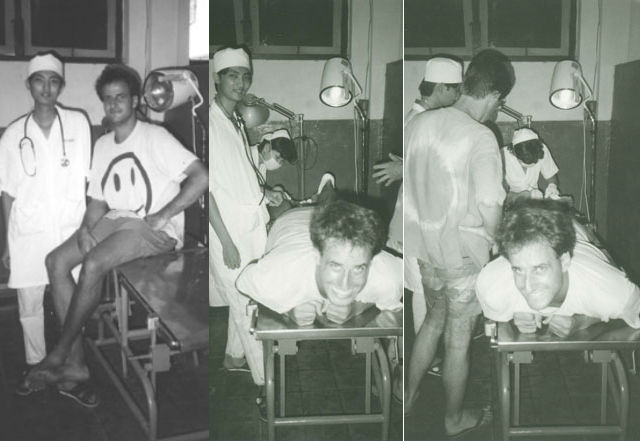 My feet went into a couple of sea urchins and I had to have a “small operation”. Vietnam was memorable, to be sure.

The short story:
In a country lacking any solid travel information (pre-Lonely Planet, too) the one thing all travelers in Vietnam knew was to go to the Prince Hotel in Saigon to arrange transport. When you had enough people to fill a van, you’d make a week-long trip up north. We were warned that the driver would only drive during the day because the night was unsafe. The days could be plenty unsafe, too, we discovered, when we came upon a gruesome crime scene.
There had been an ambush on a truck on a mountain curve. Three were dead. Two lay under woven bamboo mats, but the third, the driver, was left intact, which was hanging upside down from the open door of the truck. His body had twisted as he fell out and was stuck. A long, wide trail of blood stained the road.
It had very recently happened, we could see. Someone explained that the truck had just delivered a load of cement, and the attackers knew they had cash on them. Someone in our group asked how much cash, based on what a truckload of cement goes for.
“About $200.”
I had $800 in my pocket. We all had lots of cash. There was no other way to travel in Vietnam in 1992.
Why don’t you stay with me? You can follow along with RSS, subscribe to an email feed, see what’s cooking on Facebook, pray that I’ll say something witty on Twitter, check for a non-boring photo on Instagram, and if you are really slumming it, there’s always Google+.