I wanted to do it the right way.
The right way is to go to the website for the government of Abkhazia and send an application from a buggy Word doc, then pray and hope that in seven business days they can produce a one-sentence letter I take to the border and get a visa. I wanted to go sooner—the next day—and a woman in my hotel said she heard of a French guy that managed to go through without it.
Wait, what’s an Abkhazia? Abkhazia is a breakaway republic from the Republic of Georgia on the Black Sea. The only countries that recognize it are Russia, Venezuela, Nicaragua, and Nauru, I believe. (Tried in vain to find the Nauru consulate here in the capital, Sukhumi.) 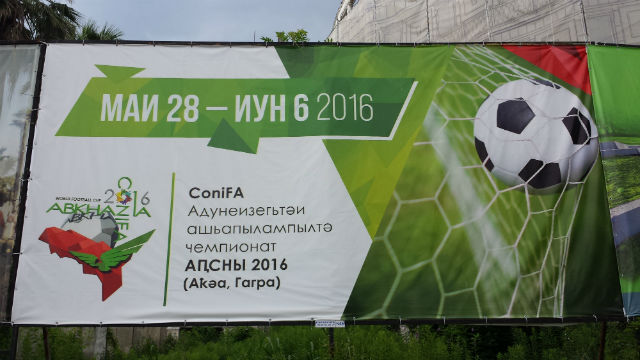 Three weeks ago was the finals for the soccer World Cup of Unrecognized Nations in Abkhazia. It kills me I missed it. This Roads and Kingdoms article is a nice story.

My hotel in Sochi was only five km from the Abkhazia border so I went to see what I could find out. I approached a police depot at the border and asked the first guy I saw, “Do you speak English?”
“No,” he said firmly.
I’ve got to stop asking this. Everyone says no, even if they speak enough. I could communicate in Russian that tomorrow I wanted to go to Abkhazia and I handed him my passport. He opened it, saw that I was from California, and his demeanor brightened. “California,” he smiled, and started to sing the song, “Californication.”
Not what I was expecting! He took a break behind the guard post and I ended up spending close to an hour with the guy. We used Google Translate on his phone—I downloaded it immediately that night; it’s a godsend—and I learned all I needed to know about crossing the border. He was a funny guy with no filter and up for a chat.
I learned that the Russians were OK with me trying to cross, but they couldn’t say what the Abkhazians would do, as if it depended on their mood. This surprised me. I thought the two were in lockstep. I assumed that since Russia was Abkhazia’s biggest benefactor, it’s reason for being, that there was a natural connection and coziness between the two, lots of warm and fuzzy feelings all around. The guard said to me, “Abkhazia people…are goat fuckers.”
Oh.
He asked how much money I made in America, saying he made $500 a month. I asked if it was enough to live on. He shrugged his shoulders. I also asked if he had to get (extort) money from travelers passing through to supplement his income, but he didn’t answer and it might have been imprudent to ask, so we moved on to other topics, like guns. He said Russian police weren’t violent and gun-crazy like American police. He pretended to point a gun at a colleague and yelled, “Shut up and get down, Motherfucker!” to the amusement of us all.
I asked to take a photo with him and he refused, saying he isn’t allowed to be on any social networks. It’s probably for the better. I don’t dare say his name, which rhymes with “Doris.” Just kidding.

This standard Abkhazia license plate goes for about $50 on ebay.

It didn’t go as smoothly as I expected the next day.
The next morning at the border, I didn’t expect to sashay through the Russian side, but I also didn’t expect to get the third degree from several officers and led around from one room to another. My passport has never been more thoroughly scrutinized. I didn’t emerge for nearly an hour.
The officer in the booth kept me hanging for a long time, Russian tourists silently fuming as they waited behind me. I was then told to step aside until someone came for me and then the questions began: why I was visiting? Where will I go? How long did I intend to stay? What did I know about Abkhazia? Did I know I had to return to Russia afterward?
Two officers unlocked a door and sat me down for an interview. One took notes in longhand while the other translated. The passport was pored over and a stamp was noted for Somaliland, another breakaway republic. I forgot about that one. (Thank God my Syrian visa is illegible.) He asked if I knew about the tiny islands in the South China Sea that China and Japan both claim. I said I did.
“Do you have plans to go there next?”
I laughed, but he wasn’t smiling. I stopped laughing.
They asked me my job and I said I worked at Yahoo. I worked at Yahoo for only three months last winter, but for the next ten years I am going to tell any officialdom I work at Yahoo. Everyone seems impressed. They asked me what I did at Yahoo and I was tempted to say, “Janitor.”
“Do you have a visa for Abkhazia?” I was finally asked, the one question I was waiting for, but then he asked another question before I had time to answer, and the moment passed.
I was taken to another room where several officers handed my passport around. For each one I had to stand and stare at them while they looked back and forth at me and the photo. All of them used a monocle-like magnifying device to more closely examine it. The photo, one explained, was dark and not sharp. That’s true. My passport is 6 years old now and the photo is easily 10+ years old. It’s a small miracle they let me get away with it when I renewed. I am decomposing rapidly, and the fresh-faced ingenue from ten years ago is now a grizzled, homeless drifter.
One officer asked if I thought Abkhazia was independent or part of Georgia. I said the safe thing, that if I am here to get my passport stamped, therefore it must be a different country. He told me that a Spanish cyclist came through recently and he said it was part of Georgia. What a jackass, I thought. You have to know who you are talking to in these situations, and that was the worst thing to say to the Russians. I assume they refused him entry.
He continued, “What do Americans think of Abkhazia? Is it independent?”
I gave an impertinent answer, saying that Americans don’t think of Abkhazia, that Americans don’t think much about the rest of the world.
Everyone became satisfied or bored and they let me go. I was struck that the Russians were not aggressive or forceful in any way. They were professional and straightforward, they asked their questions, and if they chose to not let me through, that would have been that. No histrionics, no good cop, bad cop shenanigans.

This Abkhazia police license plate would go for at least a week’s salary for a policeman.

I felt victorious to make it through the gauntlet and I breathed a heavy sigh of relief. Walking on the bridge over the small river demarcating the border, I suddenly realized I didn’t know what I was going to say to the Abkhazians about being paperless. It’s good to have a game plan rather than give vague answers when they ask what you are doing.
Welcome to Abkhazia?
The Russian border control is in a good-sized building, an appropriate size for such a place. The Abkhazian side looks improvised, just a couple of scraggly booths barely covered from the sun by an overhang. Everyone was going through quickly with their red passports, and then my blue passport gummed up the works. The guy took it and without opening it, he regarded the country on the cover and flipped it back and forth in his hand while contemplating something.
He asked if I spoke Russian. I said no. He opened the passport and asked if I had the visa paper. I said no. He got out of the booth and had me walk within sight of a colleague twenty meters away to yell, in English, “Do you speak English!” but by now he was smiling and when the guard looked at him blankly, he started pointed at me and yelling to other colleagues, “Do you speak English!” and “DO YOU SPEAK ENGLISH!” again and again maniacally to anyone within earshot like Brando screaming for Stella in “A Streetcar Named Desire.” It was embarrassing, and I could only stand and watch.
In an epiphany he turned to the Russian tourists behind us in line and tried again, but quieter: “Do you speak English?”
A young guy said yes. The guard spoke with him and I was told that I had to go to Sukhumi, the capital, about three hours away, within three days to get my visa.
I was in disbelief. Huh? What? Really? That’s it? I’m through? I half-expected him to change his mind, but passport in hand, I skedaddled out of there quickly.
I’m in Abkhazia! That was excitement. That was fun. The English speaker showed me which rickety bus I needed for Gagra, the nearest town about an hour away, and I felt relieved to be sitting down. The gregarious bus driver entertained us en route by engaging everyone in a Russian geography quiz. Abkhazia! It’s a good start. 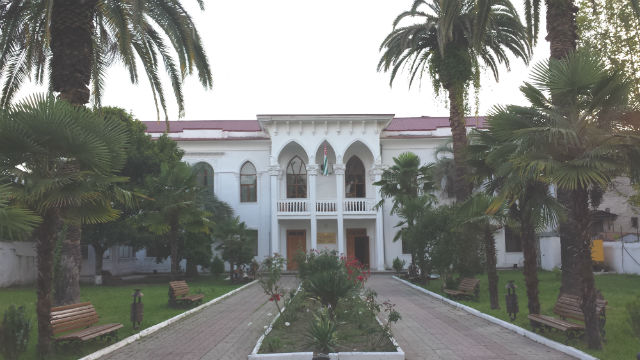 The Abkhazia Ministry of Foreign Affairs in Sukhumi, the super-sleepy capital.

Epilogue
I made sure I didn’t show my face at the Ministry of Foreign Affairs until the third day in case they freaked out about my being paperless, but the night before I finally got the visa letter in an email. It took four business days. I had tried the previous week, but my email bounced. I don’t know what changed.
The visit was uneventful. The guy barely glanced at the paper. He asked how long I wanted to stay. I said ten days. He told me to go a bank about 100 meters away to pay for the visa, and when I came back, it took five minutes to get. They gave me ten days on top of the three I already had. The cost? 350 rubles, about $5.25. Incredible. Is there any other country on earth where the visa is less than $20? I can’t think of one.

PRACTICAL INFORMATION:
The best days to enter are Wednesday to Friday because you have three working days to get your visa and it buys you time if you don’t want to rush to Sukhumi. It occurred to me, however, that no one knows when I left Russia, so how could they know when three days is?
Most people do this charade on the Georgian side because you need a multiple entry visa for Russia to enter from there.
The one concern I have is to be paranoid about losing my passport. There’s no U.S. consulate here. The only thing in my favor is I don’t have a Russian exit stamp, so if I could make it back to Russia somehow I could just say I lost my white migration paper, but if I got caught trying to enter Russia through the mountains…I might even get my name in the papers back home for that.

The very-rarely-seen South Ossetia license plate, another breakaway republic from Georgia. Should I try to go there next?