To keep me off the mean streets of Northern California, I got a three-month job at Yahoo.

Have you missed me?
I’ve been quiet for two reasons: I haven’t been backpacking so everything else seems boring by comparison, and Yahoo told me 591 times that my work is confidential and I’ve been scared to write anything about my time there since I’d like to be able to return.
But here I am. My contract is over, and I’m hitting the road again. I have a Russian visa in my possession—a three-year, multiple entry visa!—and only today did I realize that includes the 2018 World Cup in Russia. (I’ll be active on Instagram in Russia if you want to see some funny, vaguely provocative photos.) 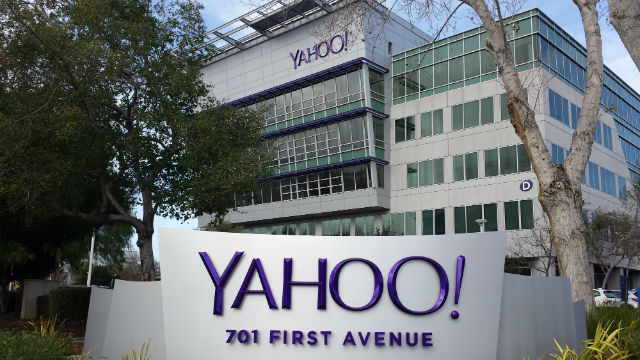 If Yahoo had a washer and dryer and if they’d let me sleep under my desk, I would gladly never leave campus. Free food, free gym, nice facilities—what’s not to like? On the other hand, as it was, I had friends nearby that I never saw and lived a Yahoo-only existence.

I kept offering to get my colleagues pregnant so they could get these prime parking spots, but no one took the bait. (I guess, “Come meet me under desk A-3771 after work” isn’t very compelling.) The women of Yahoo, they’re very intelligent, I’m telling you.

My title at Yahoo was Search Editor, but it seems to be an internal game that job titles are opaque and it’s a riddle as to what everyone really does. There is strict confidentiality even between teams and endless reminders to keep it that way. Too much is at stake for loose lips in the hyper-competitive tech world. (I sound so knowledgeable!) I will say that my primary duty at Yahoo (nervously looking over my shoulder) was to improve search results. Vague enough? Whew! That was a close one!
I say this to people and I can see in their eyes the real question is how I managed to get a job at Yahoo with my skill set, which from all appearances is limited to hitchhiking and dumpster diving, but I’m here to tell you that I’m more than a pretty face, kemosabe. I’ve done a few different things in my life, and it’s no small feat to type 57 words a minute with a phone precariously held in one ear during an interview. I also used to work for a company that Yahoo bought, and I still know a few people here. And I have photos of all of them in compromising positions. Blackmail is a bitch.
I was more interested in how I fit in with my co-workers. On my team I was a good 15 years older than anyone else, and sometimes it felt like I was Creed from the U.S. version of the TV show, “The Office”: a weird crank with a hazy past best left unmentioned. I’d be overcome with the delusion that they’d want to hear about the time I was in Syria just before the war and then I’d see the looks on their faces and realize I need to do a quick u-turn. As a solitary traveler, it was a nice change to be part of a team, so I tried to make myself useful and it was fun. Yahoo was fun. Working was fun. There, I said it. 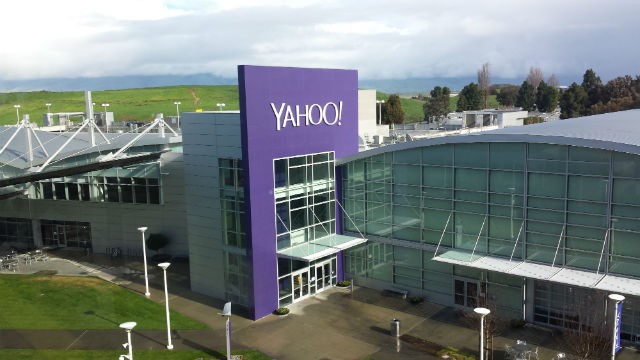 The yin and yang of my Yahoo life: the cafeteria on the right and the gym on the left. I swear, I worked out a minimum of one solid hour every single weekday, more solid hours every single weekend, and yet I weigh the most I ever have in my life. I’d show you a photo, but, um, my camera is broken.

The food was incredible. Some days would see wild boar or chimichurri turkey legs or wagyu beef hamburgers. Anything on the daily menu where I thought to myself, “Wow, when am I ever going to have that again?” I had to try, which became virtually every meal. Somehow I seemed to be the only one at Yahoo without any self-control, and my weight spiked. How can you control yourself when every meal is an exotic feast and all of it is free? FREE!
I can safely say that for the rest of my non-Yahoo life I won’t be eating chia seeds and quinoa in comparable quantities. Even in the humdrum snack rooms there’d be drinks that I’d stare at like a just-released prisoner, unable to recognize anything familiar. 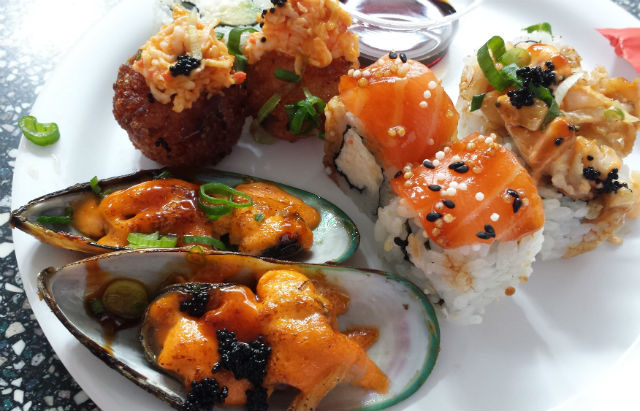 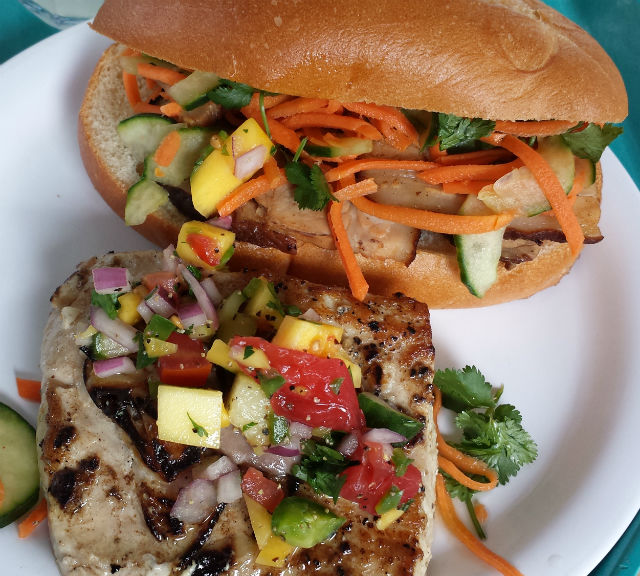 As I recall, this was a Vietnamese banh mi sandwich with grilled mahi mahi. 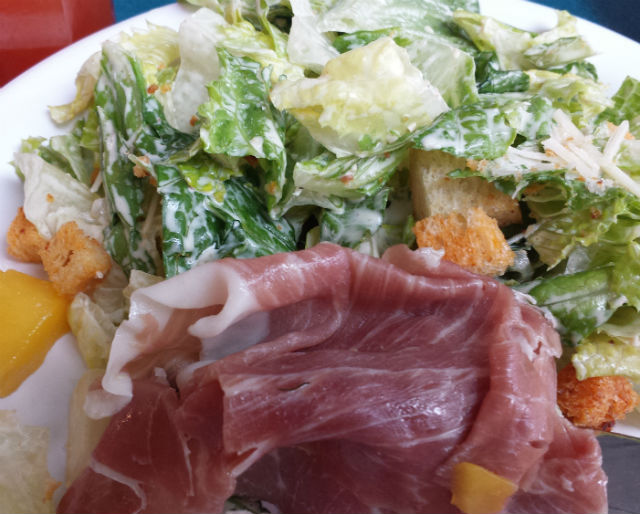 A simple caesar salad and prosciutto crudo. I never looked to see what desserts there were. Let sleeping dogs lie.

Sleeping is the problem in Silicon Valley, which rivals New York City now for highest rents in the nation. I did it all: couchsurfed at a Nicaraguan girl’s apartment, slept on friends’ couches and spare rooms, and suffered through Airbnb.
I think I have used Airbnb in California five or six times, and not once have I met the host. It’s all latchkey accommodation on the low end. I don’t mind an invisible host, but there are inevitable communication problems. (Of course, in their reviews of me, I am always a great guy, muy simpatico.) It’s a seller’s market on Airbnb in Silicon Valley. Look at this ridiculous “pod” for $33.
Eventually I found an in-law room in Sunnyvale that cost $800 for four weeks, an absolute bargain. I shared a bathroom with a surly Chinese girl working at Google who refused to tell me her name. (How I found it was instructive. Instead of answering housing ads on Craigslist, I made my own “housing wanted” ad and found a Vietnamese widow looking for a short-term renter. 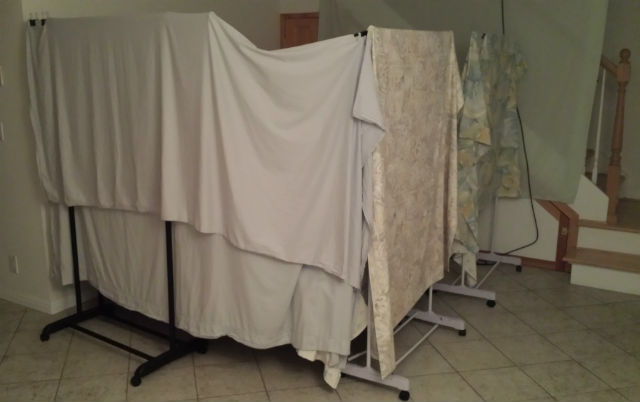 For one night I was at this Airbnb in East San Jose: a makeshift “room” separated by bed sheets that I shared with an equally bewildered Indian guy whose “room” was off the kitchen. This was also the nicest place I stayed.

(NOT VERY) PRACTICAL INFORMATION:
Do you know how hard it is to get a library card in California? They want official proof that I live somewhere, but I am always sleeping around or unofficially subletting and have no paperwork to support my claim. Frustrating. It is easier to buy pure heroin or automatic weapons than it is to check books out from the Sunnyvale Public library.
I own a smartphone now. Check me out! I was hoping to be the only person working at Yahoo (or all of Silicon Valley?) without one, but I had to have it. A friend upgraded and gave me his Samsung S4 Galaxy. I’m instantly as hooked everyone else, to my chagrin, but the weird part is getting used to being accessible. I might be Creed after all.
Why don’t you stay with me? You can follow along with RSS, subscribe to an email feed, see what’s cooking on Facebook, pray that I’ll say something witty on Twitter, check for a non-boring photo on Instagram, and if you are really slumming it, there’s always Google+.