Mongolia is a new country for me! If I have to guess, I would say it is #106, but there is the endless debate among us country counters about how a country is defined and what constitutes a visit. I know an Italian guy who doesn’t feel like it hasn’t been a true visit until a local girl has slapped him. Yes, I’m talking about you, Bonadio! 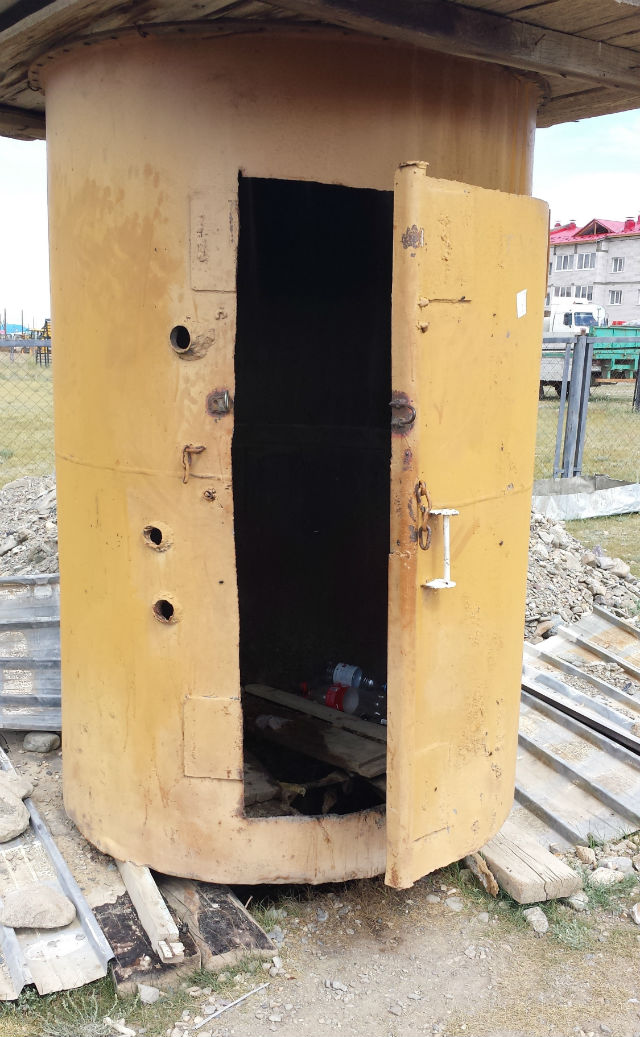 Let’s celebrate a new country with a toilet photo! This is on the Russian side of the border. Do I really want to open that door? 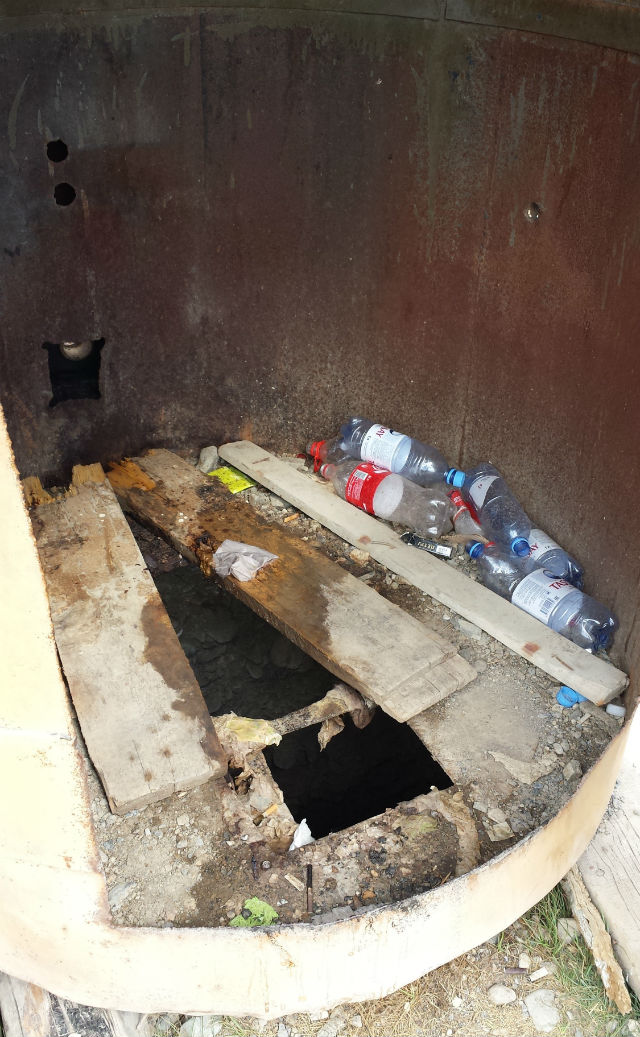 Kosh-Agach, the last town before the border 50km away, means “Last Tree” in Kazakh, and is said to be the driest place in Russia. It rained. At least it keeps the dust down. It’s a featureless, high altitude scruffy settlement with two-tone mountains in the distance. It’s not a pace anyone lingers. You know where it reminded me of? Alamogordo, New Mexico, which I think is Spanish for “bleakness.” 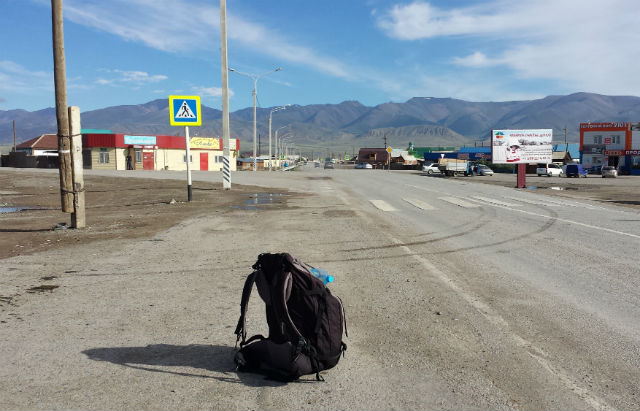 I dutifully got up early from the only real place to stay in Kosh-Agach, Tsentralnya Hotel, and went down the street to the Maria-ya supermarket to take a share taxi to the border, as I heard that’s what everyone does—–but the parking lot was completely empty. OK, Plan B: hitchhiking. It is pretty common to see people on the road holding their hands out for lifts, so I gave it a try.
Traffic was light. Many drivers passing by indicated that they were staying in the area; this communication, I always believe, is a good sign, that at least people are interacting with you. 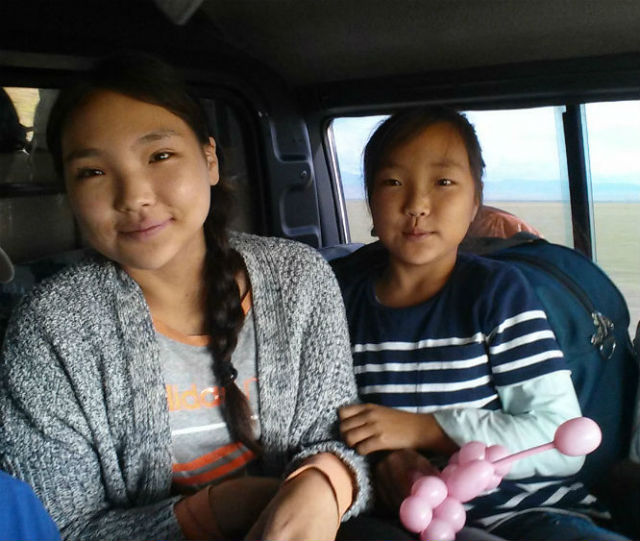 A Mongolian family stopped for me. They had a van crammed full of stuff they were going to sell in their shop when they got home. I sat in the back with the two daughters, aged 18 and 9. The 18 year old was named Enkhtuul. 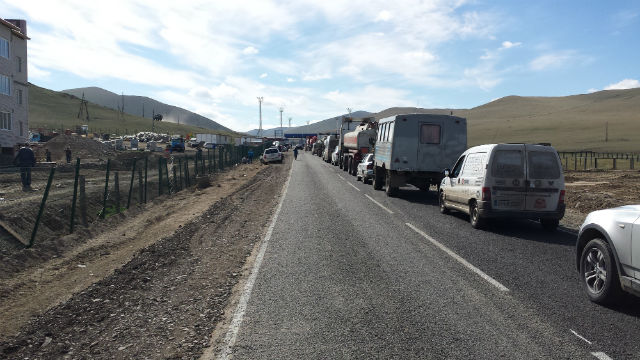 It’s a shockingly good road to the border. Usually these roads are in the worst condition. Must be a political reason. There were only 15 or 20 cars ahead of us at the border, but it took us two and a half hours to get to the one person(!) stamping passports at immigration. The other drag is that they are very thorough in checking cars—this is to leave Russia, remember—and they have sniffer dogs and plenty of time.

The immigration officer looked me up and down and did who knows what for an uncomfortable period before deciding to make me stand out of the line while he made a call. He might have been punishing me for laughing. I always crack up at immigration. Something about the absurdity of it gives me the giggles. After 10 minutes I was allowed to pass.
So I was already through and hanging out with the 9-year old girl while the van was being searched when another immigration officer approached. I thought he was going to yell at me for spitting date pits and sunflower seed shells all over the ground in the inspection area. Instead he asked for me to come back inside and go upstairs with him.
Oy vey. I don’t know what this is about, but it can’t be good, I thought. At the same time, I have nothing to hide and can give credible, quick answers for everything. This will be easy. At least that’s what I thought.
The Interview
He handed me over to someone who spoke English. The door was closed and I was with a young guy who seemed a little unnerved by the gravity of his job, but boldly made a go of it. He got out a pen and paper and started with the usual questions about my trip, dutifully writing down every town I had been in. What was my job? I said I worked at Yahoo, which startled him a little. “You mean, like Google, Yahoo?” He asked what my job was there.
“Search Editor,” I said. He didn’t understand, and I regretted saying the word “editor” because it is too close to “journalist” which is what you get killed for in Russia these days. I explained that I was trying to improve search results.
He started dancing around the topic of why I was traveling alone. Was I married? Did I have kids? Why wasn’t I traveling with anyone? I wanted to answer, “because who in their right mind wants to sit for three hours at this godforsaken border?!” but I said that it’s hard to find people to come here and—I couldn’t resist—the Russian visa is too difficult to get.
He asked if I normally traveled alone and I said yes.
Why?
I travel too much for someone to have the same schedule.
He countered that he sees lots of people traveling together. Didn’t I think that if I found the right person that I could make it work?
I was on the defensive, feebly saying, “Yes, it’s possible.”
Did I like traveling alone?
I said I was used to it.
Did I want to get married?
I’m not against it, I said, but it isn’t something that is going to happen soon.
Do I want kids? Not at this stage of my life, I said.
Why didn’t I want to have kids?
I kept answering these questions, but by now I was only thinking, “What the hell is this?!” I get these questions from half the people I meet, sure, but I never expected this interrogation in Siberia on the Russian/Mongolian border as I’m trying to leave the country.
I said that if I want to be with kids, I can hang around with my sister’s six kids, and he wrote down that my sister has six kids. I didn’t mention that they are all adults now. Am I failing this tete-a-tete? What are the consequences of my answers? Have the Mongolians become tired of waiting and left me behind?
He continued. Did I like Russia? Was I taking pictures? Could he see some of them? For an instant I wondered if I was going down a rabbit hole, that this might lead to something I’m not prepared for and definitely not clever enough to get out of, but in the second instant I handed my phone over, then tried to remember if I had any photos I should be worried about. The first photo he saw was of the toilet, and he laughed.
He pored over the photos and asked if I had Instagram. Again I showed him my phone. He laughed some more and seemed genuinely entertained by it. He wrote down my Instagram name, misterkiasu. Was he going to follow me? By now he seemed disappointed that I was going to go. I think he wanted to become friends, maybe settle down, start a family, adopt some kids.
He never asked me about the Mongolians I was traveling with. On the border I am cognizant that it can all go sour very quickly. You are casting your lot in with who picks you up, and if at the border you say something flippant like this is my Mongolian family I’m traveling with, what if they are discovered to be smuggling drugs? 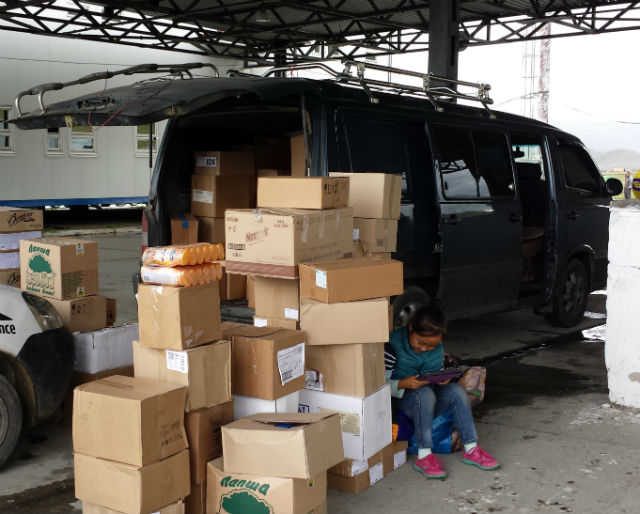 Imagine having to do this twice every time you cross the borders. I like the little girl playing her video game on a box, like she’s been through this countless times already. They had another eight hours to get home, less than half of it paved.

It’s 15km between borders. I don’t know if I had walked through the border on the Russian side if they would have let me hitchhike through No Man’s Land to get to the Mongolian side. It would have saved me at least two hours if so.
They’re more relaxed on the Mongolian side, and Americans are one of the few nationalities that don’t need visas for Mongolia. It would have been funny if the Mongolian immigration guy started with the same questions or if he had said, “Hey, I got this call from my Russian colleague and he forgot to ask what you think of baby names.”
Mongolian immigration was mellow, but the customs guy was in a foul mood. Enkhtuul said they were going to be stuck there a long time as they dissect their van and that it might make sense if I went ahead and tried to scrounge a ride.
At the gate to be let out, the border guy was amused to see my American passport and asked how I was going to go further. It was a good question.
At that moment another car came and when he rolled down the window to give his documents, I butted into their interaction and asked if I could come along for a way. He agreed, to the relief of everyone, and a Kazakh-Russian guy and his wife drove me 25km to the first settlement, Tsagganuur. 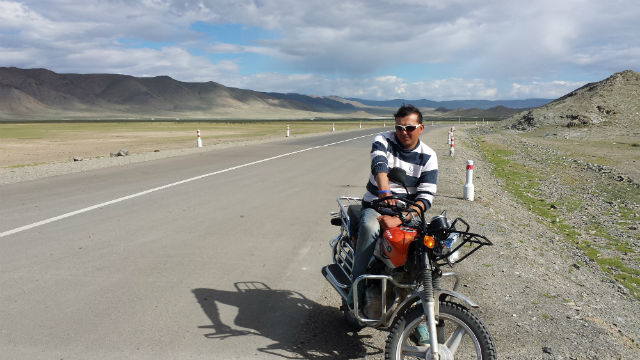 This dude in Tsagganuur came over to chat and watch me hitchhike.

I hitched a ride with a van of locals to Olgii. The landscape is something different. It’s all short grassland and rolling hills, the steppe. I saw yaks and camels. This is exciting. I’m in a daze that I am actually in Western Mongolia. Over 6000km and five time zones from Sochi! 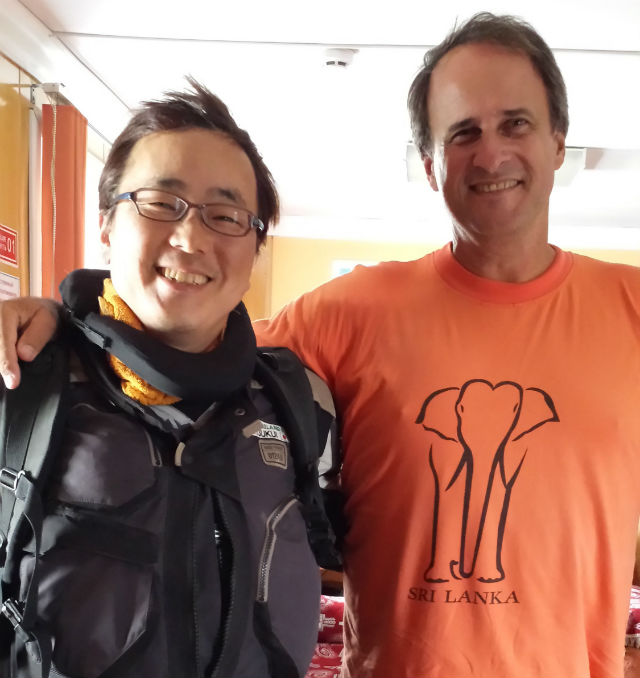 On my last day in Russia, after over a month in the country, I met my first foreigner, a Japanese named Yasu, and he was on a motorcycle. He’s traveling in a funny way, by parking his van and then riding his motorcycle in a circle back to the van, and then onward to make another base. He shipped his motorcycle inside the van and traveled along with them from the only port in Japan that would allow him to do it that way to Vladivostok, which was from remote Tottori-ken. It cost him $3000.

PRACTICAL INFORMATION
I don’t have much yet. I don’t know anything about Mongolia. With the Russians I never am confident they are going to let me out or in, so I didn’t study beforehand like I would normally.
In Olgii I found a miserable place to stay. so bad I might even feature it in the next blog post.
Why don’t you stay with me? You can follow along with RSS, subscribe to an email feed, see what’s cooking on Facebook, pray that I’ll say something witty on Twitter, check for a non-boring photo on Instagram, and if you are really slumming it, there’s always Google+.