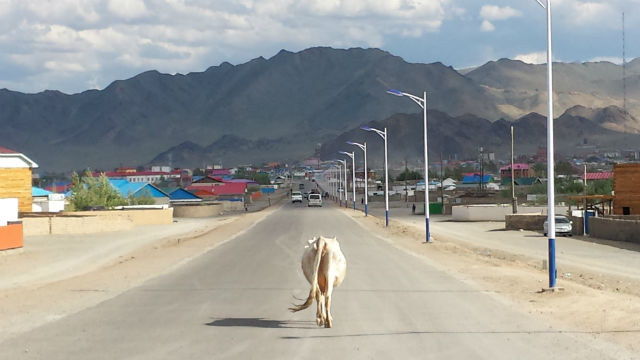 A cow’s eye view of Olgii, the first town you come to from the Russian border.

In one month and 5000+ km in Russia, I saw exactly one other traveler. Now in Olgii, remote western Mongolia, I have seen at least 15. Mongolia is on everyone’s bucket list, and I am beginning to see why.
I came the backdoor way, via Russia. Everyone else comes on the rough roads slowly being improved upon from the capital, Ulan Bator, 1000 miles (1600km) away. Olgii is a long way from anywhere, but if I plopped you in the middle of this dusty town, you wouldn’t feel it. There is enough bustle and energy to distract you from realizing that the next stoplight is days away.
Did someone say stoplight? Check out this video of Olgii’s super funky stoplight!

I met a couple who thought it would be an “adventure” to take a public bus from Ulan Bator. As Pico Iyer would say, it was the last word in discomfort. It took a grueling 48 hours, and they still looked shell-shocked from the recollection of it. They said they had the same driver the whole time, too. He was on automatic pilot, just making the minimum stops for quick food and toilet breaks.
I’ve seen these bus toilet breaks. The bus drivers don’t care where they stop. Neither do the passengers. Everyone just walks 20 steps away and drops their pants. It’s a sight to (un)see. 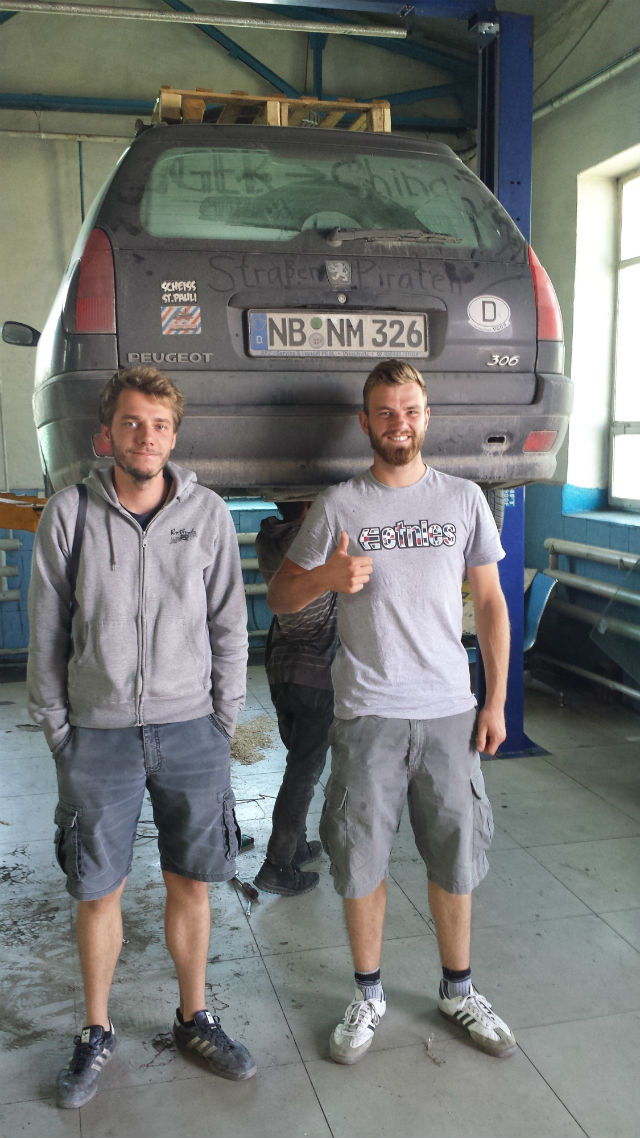 These German college students are doing what every college student should be doing and few do: a road trip. (My college roommate and I drove around America one summer watching baseball games and it was my favorite trip.)
They bought a Peugeot—A Peugeot?! Don’t they break down every other day in normal conditions?—for 700 euros and just went hellbent to Mongolia, driving across Russia in nine days. They weren’t pulled over once by the infamous Russian traffic police either, probably because they went full ghetto on the car. Look at that wood pallet on top! They also said needed a sort of car passport from home but paid nothing at the Russian or Mongolian borders. They need to mail the license plates home after they get rid of the car here for German tax reasons.
Everything had gone fine until they were on a mountain yesterday and the brakes gave out. They descended using the emergency brake only, which could have been suicidal. I went to the garage because my new Japanese friend, Yasu, had problems with his motorbike. At the garage half a dozen guys descended on the bike, and after 30 or 45 minutes they changed some fuses and charged him $10, I think it was.
Yes, hanging out at a garage talking with everyone is my idea of a good time when traveling.

Speaking of cars, I see lots of Toyota Land Cruisers. Aren’t they crazy-expensive, especially by the time they wind up in Mongolia? Someone must be making serious coin to afford them, so this can’t be a lazy backwater. There’s a lot I don’t know.
The real mystery is the prevalence of the hybrid Toyota Priuses. Priuses!!! Give the Prius salespeople raises. I never guessed my first ride in a Prius would be from hitchhiking around town in western Mongolia, but there you are. 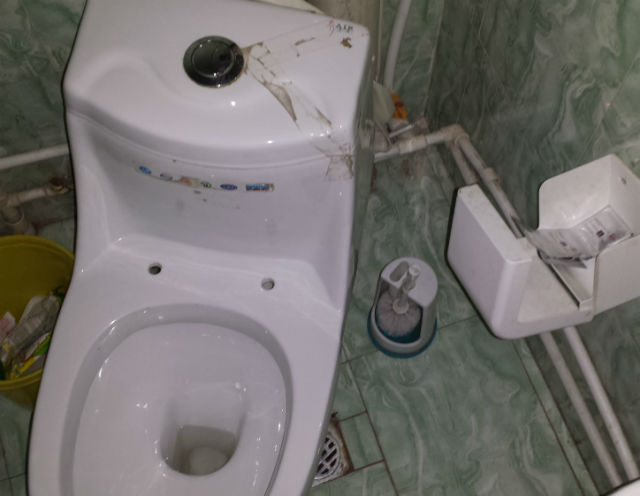 The recommended Blue Wolf Ger Camp was full, so I stayed at the phenomenally shabby Tavan Bogd Hotel in the middle of Olgii, paying more than I ever paid in Russia ($15). Instead of toilet paper they supplied 5 condoms. Whaaat? 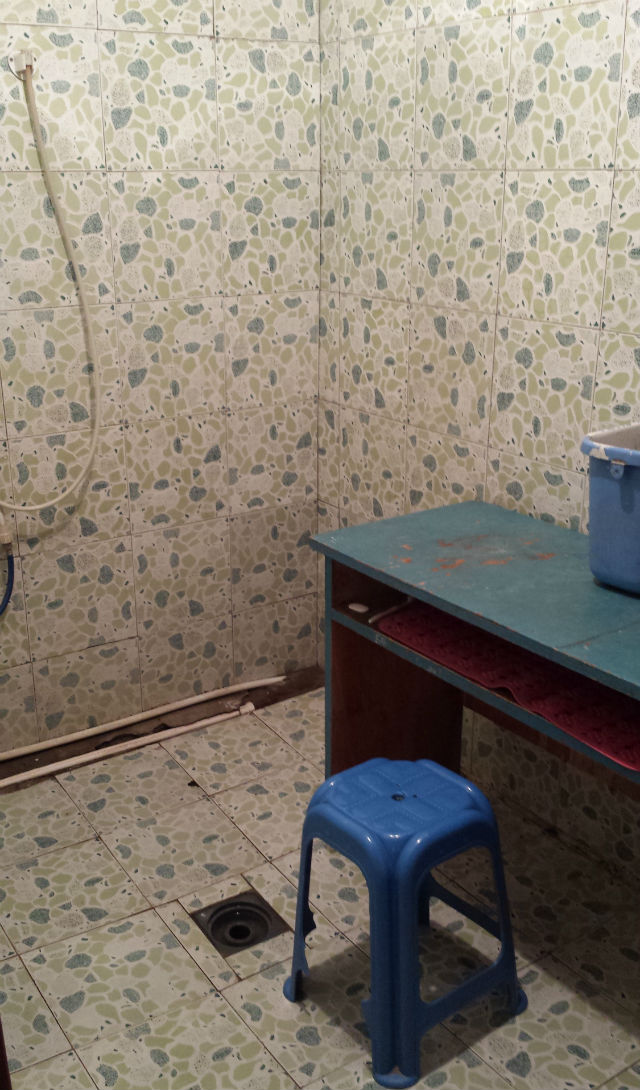 The first shower I’ve seen that had a wood desk. Is this the future in writing? Would my blog posts improve with a little soap? Hey, who just said, “It can’t hurt?”

I moved into the Blue Wolf as fast as possible the next day. It was my first experience in a ger, or yurt. Gers are amazing. I’m an instant huge fan. $10 including breakfast. This is a video of what more groovy super funkiness looks like: 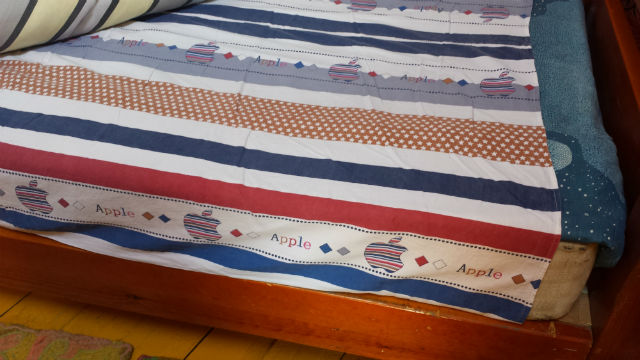 Did you get a good look at the Apple Computer bed sheets? 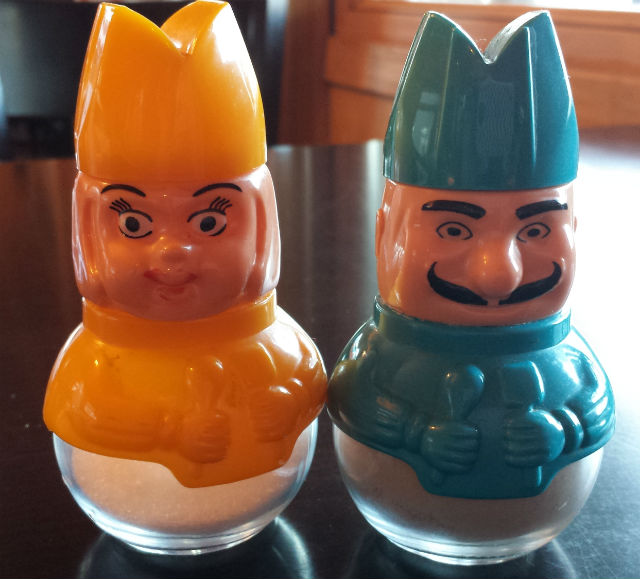 For some reason there is a fairly authentic Turkish restaurant called Pamukkale in Oglii. I don’t think there is a comparable place within 1000km. I ate there twice a day. These are their salt and pepper shakers. 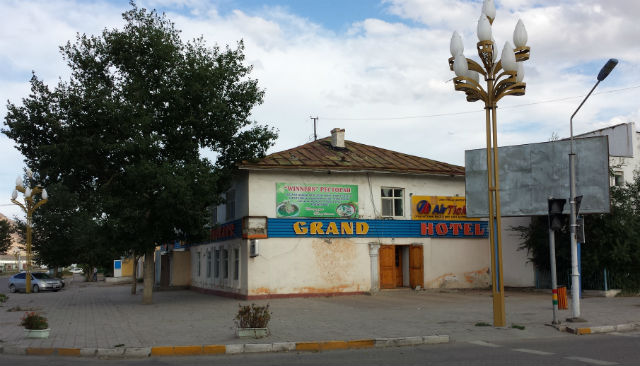 Wait, I stayed in one more awful hovel! This was in Khovd at the optimistically named Grand Hotel. Hotels over restaurants are usually bad news; I should have known. 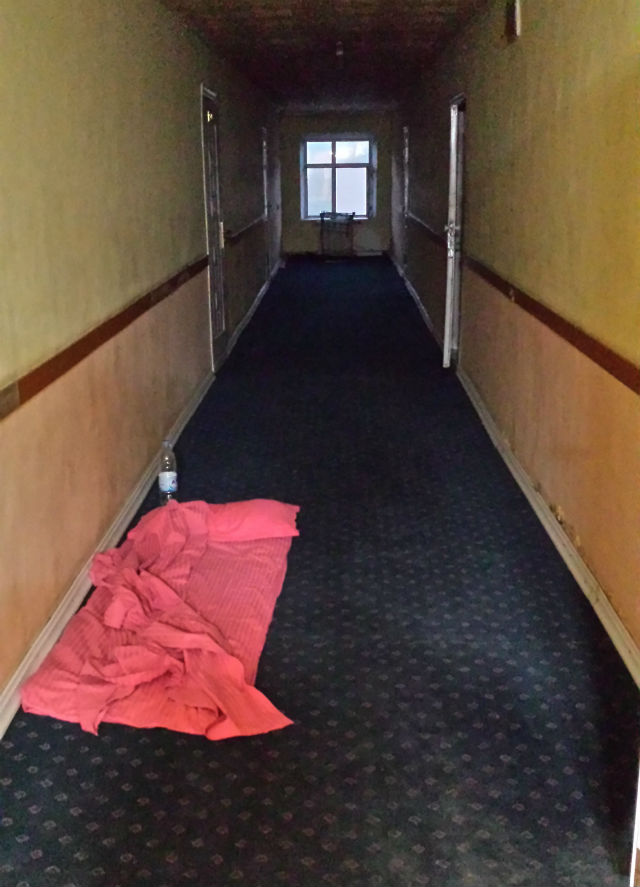 I saw a mouse scurry under the bed, and I was hoping he was going to make his way downstairs to chow down, but it remained, maybe called a friend or two, and the noise became so unnerving I found myself sleeping in the hallway. Fun times in Mongolia! Traveling is the best!

PRACTICAL INFORMATION:
Blue Wolf Ger Camp is the go-to place for arranging tours in Olgii. An Italian couple wanted to do a two-day excursion, and (for a very cool, UAZ Soviet-era van) they were quoted $60 a day plus $80 for gas and to see an eagle demonstration it is another $25. The ger would be $10 plus breakfast.
I arrived in town knowing very little. I took a photo of the Olgii Wikitravel page. It’s so out of date, but it’s all I know. Lonely Planet’s Thorn Tree is a shell of itself, as are Couchsurfing’s travel groups. I don’t know where to turn. Lonely Planet’s website, too, is very user-unfriendly. Talk about a fall from grace. Lonely Planet, you used to be a god. 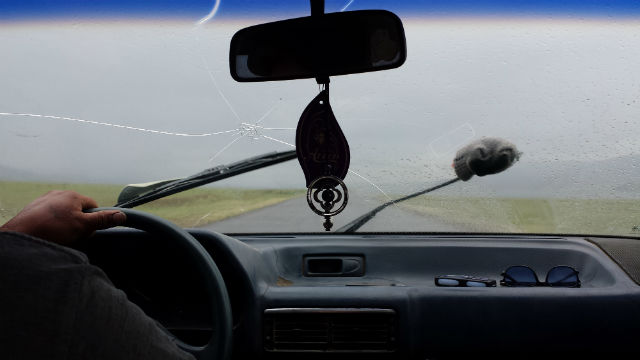 This is the view from inside a car I was hitchhiking in when it started to rain. The driver had substituted a sock for the right windshield wiper. Resourceful! The next blog post will be about my hitchhiking in Mongolia. I’ve done over 1000 miles (1600km) now, most of it on dirt roads. It’s been an experience I don’t hope to duplicate.