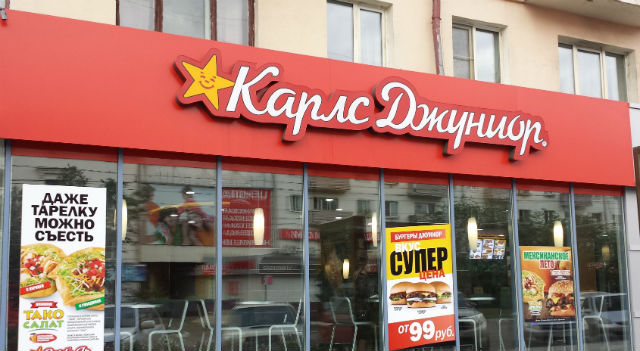 Quick quick quick! What is this? (Waiting…) It’s a Carl’s Jr (“Karls Dzhunior”) restaurant in Chita, Russia in the middle of nowhere. (The map of my path is on the bottom.) Actually, Russians might call Chita “The Gateway to Nowhere.” For me, it’s another example of globalization—let’s call it what it is: Americanization—gone very wrong. However, if it were a California-style burrito place, I would call it a triumph of globalization.

I woke up in Chita, already quite eastern Russia, dreading what lay ahead of me; Eastern Siberia leading into Far East Russia is a lot of blank space. The “Lonely Planet Russia” book can’t come up with anything to say for 1000 miles. The funny thing about it is I chose to tackle the distance in the strangest, riskiest way: hitchhiking. My idea was first to see if I could hitchhike at all, and if I managed to go any distance, I’d take an overnight train from wherever I ended up.
I met actual, real-life hitchhikers who had come the other way. They were a Russian couple in Ulan Ude who had just hitchhiked in from Khabarovsk—four days with a truck driver, sleeping in the truck the whole time. It doesn’t sound like my idea of fun. Besides, it is almost something other than hitchhiking when you are with a beautiful blonde girl; it’s too easy. I mean, you could see she was a pretty girl from 50 meters away, or as Woody Allen would say, “Her body was a set of parabolas that would cause cardiac arrest in a yak.” 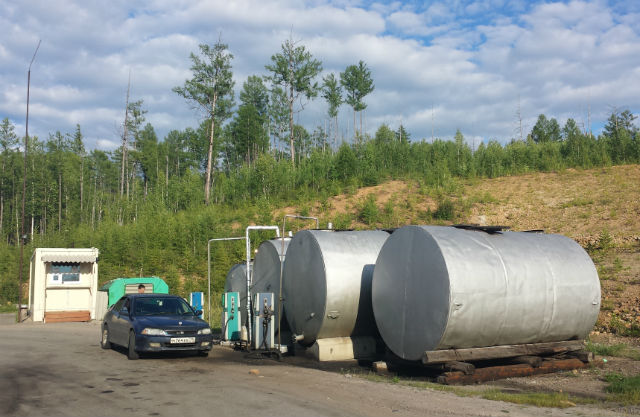 This is what a Siberian gas station looks like. Think no frills. Ready for another can’t-miss free business idea? A simple highway gas station rest area with hot food, snacks and toilets. There is hardly anything on the roads. I don’t understand it. Everyone would come. Everyone. As it is, there is almost only no-facility stuff like this the whole way. I’m pretty sure the weather is nice and balmy year-round, so why not resettle here? Another FREE business idea from The Dromomaniac—and I blog for free! Incredible…

I went for it. I took a local bus to the edge of Chita, and then I got a short ride 5km outside of town where I wondered if I was making a mistake. It was quiet, eerily so, the silence punctured only by the occasional passing car. As I pondered this, my mortality, and the diminishing value of my baseball card collection, someone stopped and took me 150km, at which point it’s game on.
The 150km driver wanted me to observe his windshield wipers in action. After spraying water and watching the wipers smear the bugs in nice rainbow stripes across the windshield, he pointed and said, “Vodka!”
It turns out that he puts vodka instead of water or cleaning fluid in his windshield wiper tank, claiming that it works better. Maybe it doesn’t freeze in winter? I couldn’t tell, but it makes for a great anecdote. 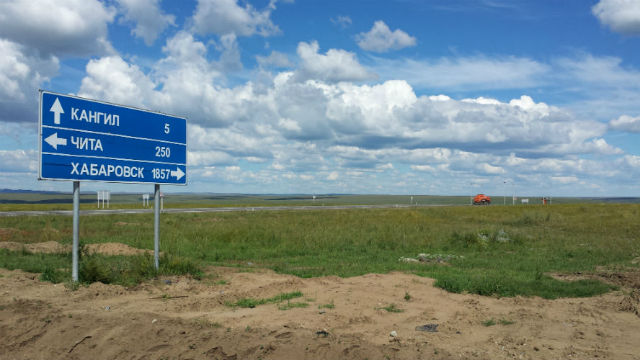 Chita, 250km behind me. I should have used a Russian “FROM CALIFORNIA TO KHABAROVSK” sign while hitchhiking, but paradoxically, I don’t like drawing much attention to myself. Smarter might have been to have some bug spray to combat all the hungry critters trying to feast on me.

I got some more rides, then a young dude drove me a big chunk to Mogocha, 800km (500 miles) from Chita. Closer to Mogocha felt more like the Siberia I had been waiting to see, even if the birch tree taiga is ever-elusive. The villages all had houses with sturdy fences to keep out pests, and every bit of space was taken for growing potatoes. Beyond that, I saw a lot of soy, but overall the land is uncultivated, unsettled and coarse—all traits that have been used to describe me, so I felt quite at home.
Siberia’s roads are better than you’d guess. They are largely paved and smooth and there’s less traffic, but the problem is that the road buckles, and instead of fixing them they put warning signs to slow down or you bottom out. The unexpected nature of these hazards is similar to Outback Australia, where you think that it will be a nice relaxing drive but then you find yourself dodging kangaroo carcasses all day and dreading to try and pass ultra-long road trains.
My driver was tired, but when we got to Mogocha he drove me out of his way to check on every hotel in town for a place for me to stay. All were full save for one, but the cost of it was the same as my overnight train, so I opted for that. I regretted my choice. Mogocha looked worth exploring, even if it resembles nothing like its Wikipedia page. I spent 1900 rubles on a ticket for the 325 train to Belogorsk, 17 hours east. 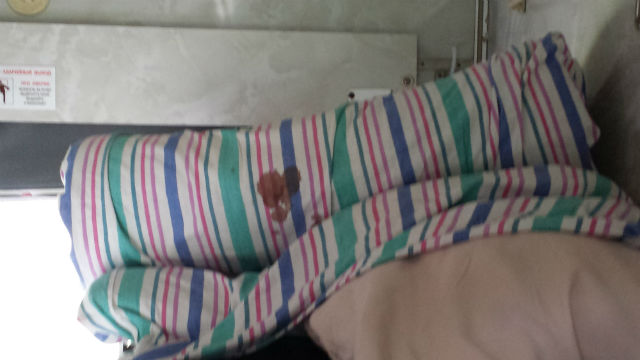 Blood stains in the middle of the mattress they provide on the train. Good thing they supply sheets.

I can’t get a break on Russian trains. I know it’s platskart, the lowest class, all Auschwitz-style open bunks, and I’m not hoping to be put together with the Russian women’s Olympic beach volleyball team, but how about an old woman not coughing in my face for a change? How about a little less body odor from the guy next to me fanning himself? Can it not be avoided in the hot and stuffy train?
Everyone, coughers and stinkers included, is generally friendly and helpful to people like me who don’t yet fully know the culture and etiquette of the train. It’s a safe environment, too, more than I would have guessed. People charge their phones on the public electrical outlets and leave them unattended, including conductors. (The modern day clarion call for Russian trains arriving is everyone’s cell phones beeping to life as we approach a town.)
The grind of platskart was wearing me down so for an overnight train once I paid the extra money and got the more deluxe “kupe” class. I then had the displeasure of a family whose two kids—I don’t know what they fed them—had to take a dump every 10 minutes. They didn’t go in the train toilet, no, no, no, perish the thought. The family brought a small bucket that they would squat on. The parents set it between my legs in the cramped compartment and the kids would stand right in front of me, turn, drop their pants, and squat. Good thing I paid extra for this show. I predict a bright future for them on reality TV.
What do you do in this situation? You make the most of it by distracting yourself. I dug out from the bottom of my backpack my Tolstoy book of short stories I have been lugging around since Tyumen. I read “Family Happiness.” There wasn’t much else to do. 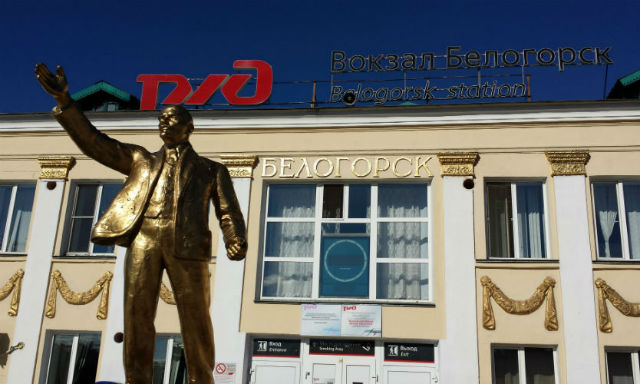 In Belogorsk I stepped wearily out of the 17-hour hellride to be blinded by Freddie Mercury Lenin in gold lame. I perked right up. 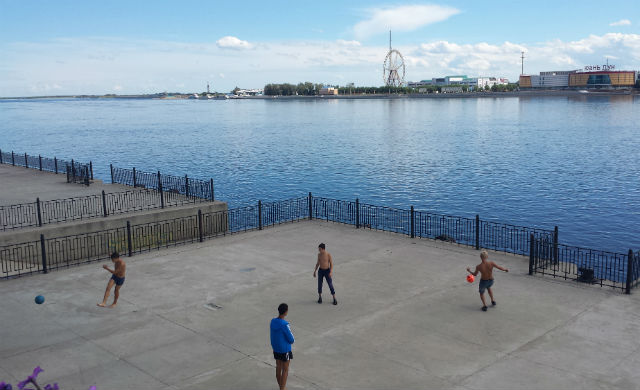 Blagoveshchensk—in the east every town is a mouthful—sits in a funny place geographically: right on the border with China, separated by the fast-moving Amur River, and two hours south of the main Trans-Siberian train/road in Belogorsk, which is a very long way from anywhere else.
I took a short cruise on the Amur, but Russians can’t help but spoil the mood by blasting horrible techno music. (They do this all the time; it’s a countrywide pandemic, much like the habit of sprinkling dill on all food.) It would be so nice to just enjoy the serenity of the river, but something about the Russian psyche can’t accept it.

I can never get a good picture of these wooden houses that are peppered all over every city in Russia. I want to get close enough to show the detail, but far enough to see their incongruity in the urban landscape. In this photo I manage to accomplish neither. You’re welcome. This is in Blagoveshchensk. 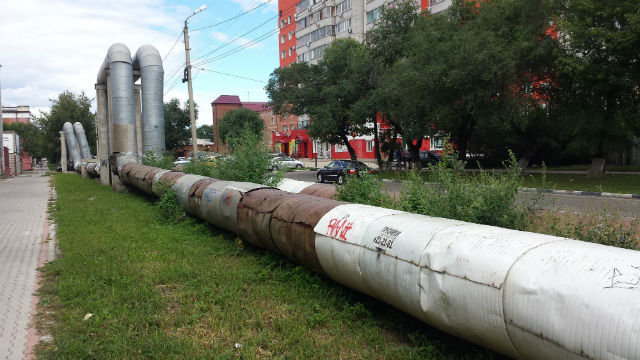 This is another common sight in the east: hot water pipes. I think the idea is that it’s cheaper to build them above ground and easier to fix.

PRACTICAL INFORMATION:
Here’s a question: in every country they show on local TV those Olympic sports which they excel at. That’s a shame. Weightlifting, for example, is high drama, but who shows it? So, from which country is it best to watch if you want to see a wide variety of everything? I am going to guess England is the best, with the added bonus that they have, by far, the best announcers. Dominoes is riveting with a British announcer.
I was several days too late in tweeting to the three USA swim teammates Ryan Lochte abandoned in Rio that just because they take away your passports doesn’t mean you can’t leave the country. There’s no passport control between Brazil and Paraguay at Foz de Iguazu. #nexttime
Chita is the red marker. If you can’t see the map below, here is the link.