Hey, Russian border control, do you think for once, just for once, you can look at my passport, stamp it, and let me in? Does it really have to be an event where I have to stand out of line, calls have to be made, colleagues summoned, etc.? No, it doesn’t. I have nothing to hide. 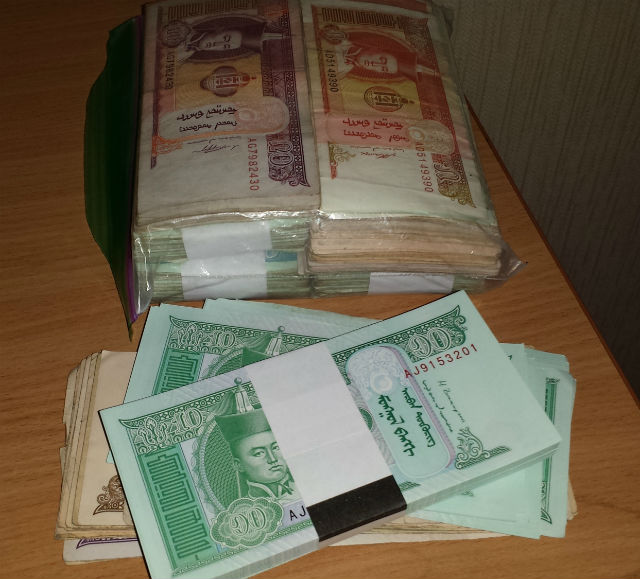 OK, I did have something to hide, but only in the sense that I didn’t want to have to explain it. I collect small denomination money from around the world. The more worthless, the better. All of this Mongolian tugrik in the photo is worth about $3. The high point in my worthless money smuggling career was in Somaliland: 7kg (17 lbs) of money worth $20. 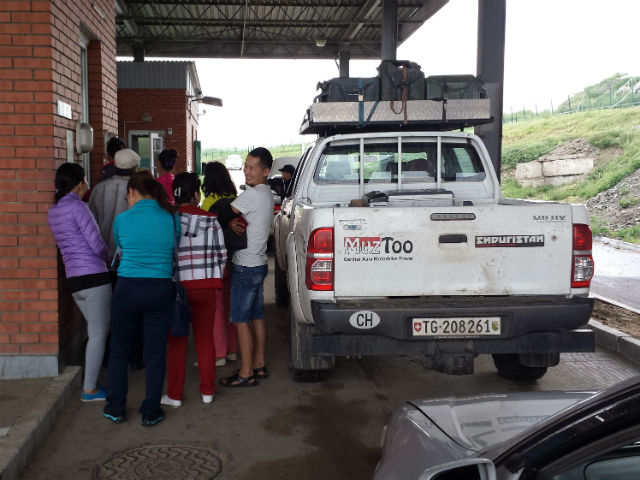 The Russian side of the border with Mongolia. As always, it’s a weird scene. The Russians have a woman who does nothing but take video of people in their cars as they come through. (You have to be in a car; you can’t walk across the border even though it’s less than 500 meters. Still, it’s faster to show up on foot and the guard will put you with a car, making your wait much shorter.) See that truck with Swiss plates? He agreed to take me all the way up to Ulan Ude, but for some reason Russia wouldn’t let him pass through.

This will only be a little about hitchhiking, I promise. It might bore many of you, but for me hitchhiking is adventure and an authentic way to meet Russians. It’s a shame it’s all but dead in my country. The problem with hitchhiking in America is that there is no culture of it any more; it is two generations removed by now. In most countries in the world, when they see someone on the road, hand extended, they think “hitchhiker” or if that is a pejorative word, someone who simply wants a ride. In America, the first thought is “homeless drifter” or “prison escapee”, or, worst, “reality show contestant.” 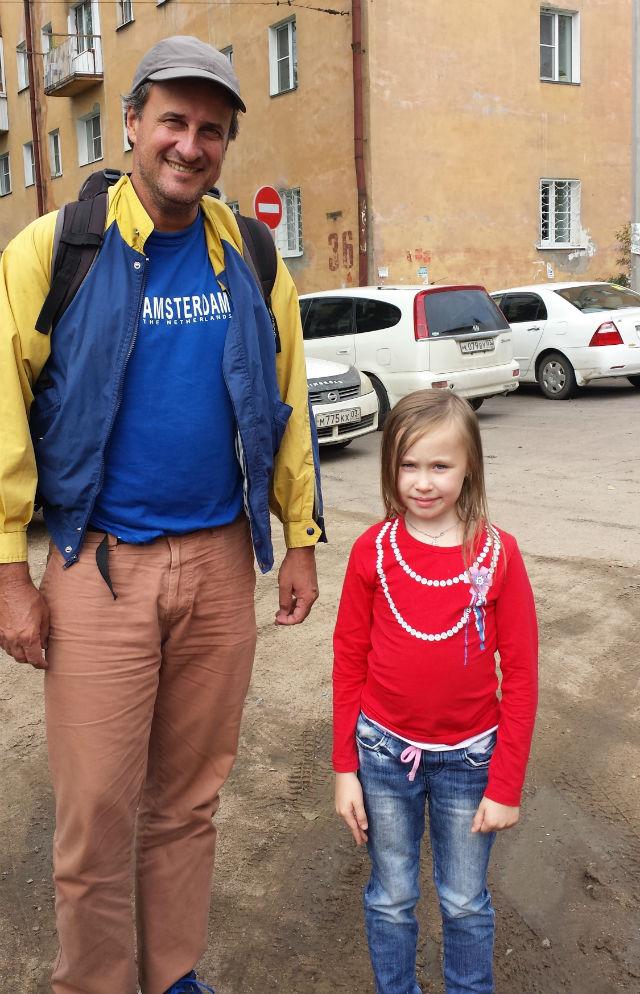 This girl and her parents picked me up hitchhiking from Lake Baikal back to Ulan Ude. The people who pick me up hitchhiking are normal, calm drivers, completely unlike marshrutka (minibus) and blablacar (rideshare) drivers.

I’ve been obsessed with the lack of taiga in Russia. I tell anyone who will listen that before I came I had been reading about endless birch forests, and I still have not seen it save for small patches. (To a Russian ear when I try and say this I think it comes out as, “On America, my book, big taiga. Here, no taiga. Where?” I still speak Russian like a Neanderthal. I haven’t been diligent in studying Russian for Free.)
Russians shrug and say it’s beyond a mountain range or it’s farther north, just never where I am. 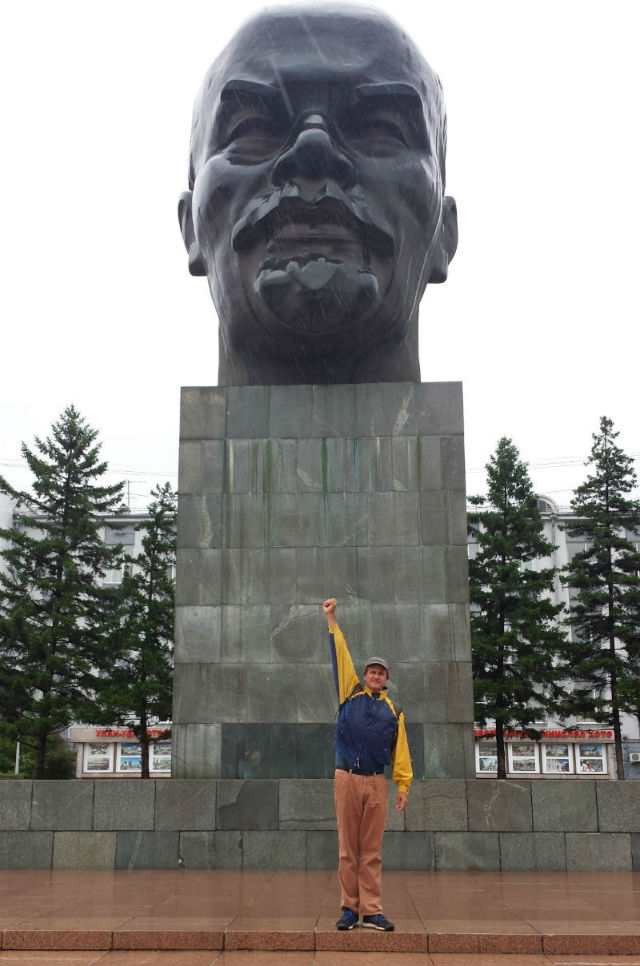 The world’s biggest Lenin head in Ulan Ude. Ulan Ude is the capital of the Republic of Buryatia, ethnic cousins to the Mongols down south. I’ve got a thing for round-faced Central Asian women, especially when fluent western languages come out of their mouths. It’s very alluring. I can’t explain why. Maybe I’m talking too much. 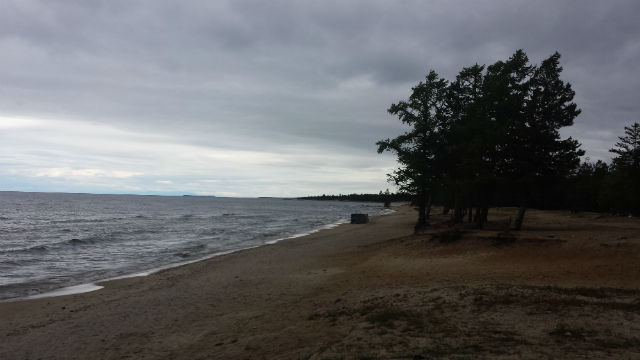 This isn’t Lake Baikal at its best. The weather had been awful for a week. Before that there were fires in the area. Before that, a problem with algae. I read that you can drink right from the lake, that it is famously pure, but there’s also a sad amount of garbage strewn about. I wasn’t reaching for my straw. It’s amazing to think that this massive lake freezes over in winter and you can drive on it.
I did not enjoy Lake Baikal, but my misery was compounded by getting stuck in a nightmare of a party place where vacationing Russians were on fire, making it impossible to sleep, the owner impotent to do anything. I had flashbacks to the only worse situation, Lake Naivasha, Kenya. That was awful AND frightening. If I die before 90, now you know why.

Crossing Siberia with one pair of pants is no big deal. It’s been warm aside from the first few days. The point is Siberia was such an unknown for me that that everything is a revelation. I don’t know what the Far East will bring, but Siberia has been a highlight of Russia so far, maybe the highlight.
I should point out that I have only been in southern Siberia, and only along the main road/train line. The so-called real Siberia and all the gulag stuff extends faaaar north. That’s where true travelers go while I sip my lime and mint water.
PRACTICAL INFORMATION:
Several times now I have found myself at a cheap hotel in the Slav Hotels chain. They are always big, monolithic, Soviet-style buildings but OK-enough single rooms can often be had for $10-$12. It helps if you don’t mind tacky linoleum floors.
Most travelers pass through Ulan Ude on their way down to Mongolia. At the bus station (the train is much more expensive and much longer) I saw these prices (64 rubles = $1): Ulan Bator 1500, Darkhan 1200, Sukhbaatar 1000, Altanbulag (the Mongolian border) 900. Kyakhta (Russian border) to Ulan Bator was 1000.
Thanks to Jen who sent me this link showing the funny bus stop architecture of the Soviet-era. It’s my kind of thing.

That’s quite a title. It means, “Shoe Store.”