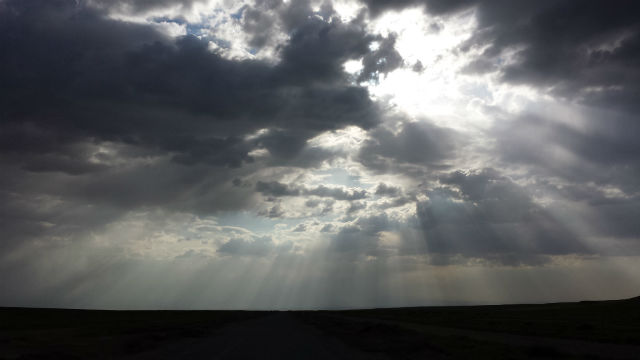 Mongolian sunburst. Imagine how startling it is to go from the empty grasslands to being surrounded by 1.5 million people in the capital, Ulan Bator. 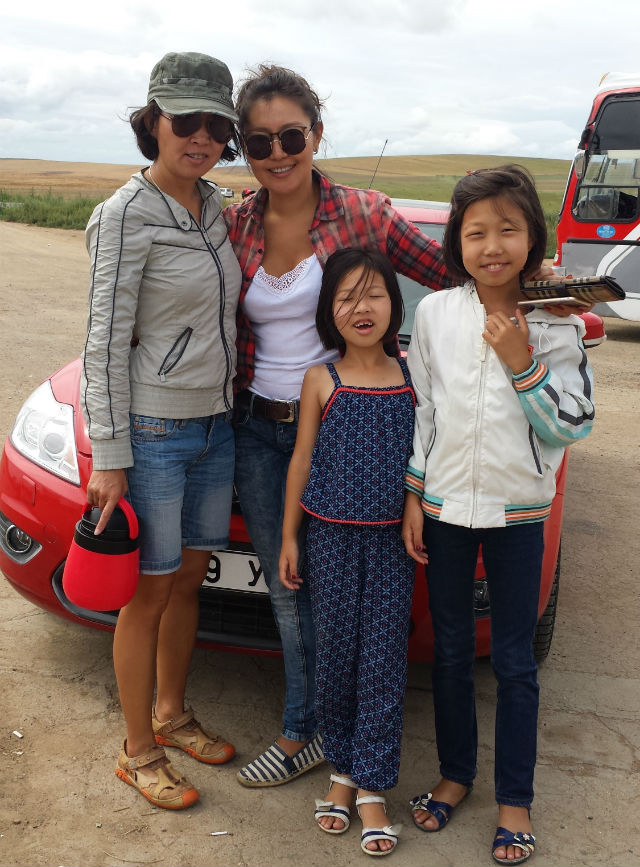 The woman without the hat, the girls’ aunt, lives in Australia as a mining expert. It’s rare enough to be a woman in the mining industry, but an Asian woman, and a Mongolian woman, and a very attractive woman all at the same time, can you imagine the scene in the mines of Broken Hill, New South Wales? I asked how many times a day the miners asked her out. She didn’t quite say, or the number hasn’t been invented yet.

This above was the fastest and funnest ride hitchhiking. I had just gotten out of one car when this next one stopped. They were two sisters and two kids, 12 and 6 years old. I sat in the back with the girls as they sized me up. The older one said, “Excuse me, Sir, but you have a big nose.”
The younger one next to me with an excellent vantage point also chimed in: “You have so much hair in your nose! The holes in your nose are so big!”
I warmed to these precocious kids immediately. They claimed they spoke English from watching cartoons.
“I don’t believe you,” I said. “I wouldn’t learn Mongolian from watching Mongolian cartoons.”
“There ARE no Mongolian cartoons,” the older one snapped.
I gamely tried to think of American cartoons. “You mean, like, Dora the Explorer?”
“Um,” she paused, trying hard not to take the insult. “That’s for younger kids.” 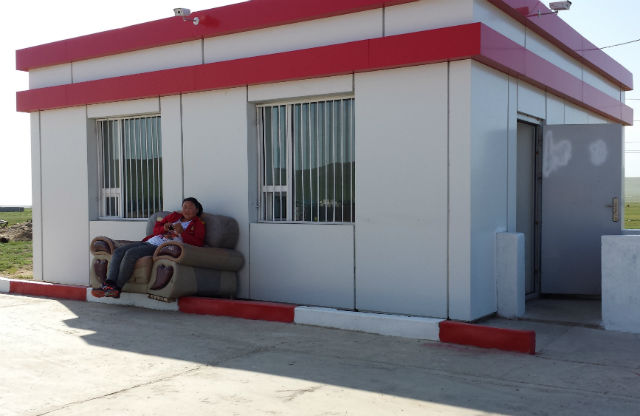 When your job at the gas station is to tell people there is no gas today, you want to be comfortable.

I have been staying here and there with Yasu, the Japanese guy on the motorcycle traveling around. The Japanese crack me up. I ragged on him about using his phone in the middle of the night—I at least got him to mute his keypad—to which he accuses me of having “low blood pressure.” He woke up one morning complaining that his small intestine was hurting.
It’s incredible how many foreigners drove here from Europe or other far-flung places. I saw a car with Chile license plates. Chile! I saw a South Dakota motorcycle plate. At the border I stood in the rain with an Estonian guy debating whether Tartu was nicer than Tallinn. I stayed a couple of nights with a guy who rode here from Spain. Mongolia really has a hold on the imagination of many, but this is also because it is the end of the road. You can’t take your vehicle into China without some sort of local guide. Can’t let western mores influence the Chinese and their famously fabulous driving skills.
I’m surprised by the lack of a Chinese presence in Mongolia. In Ulan Bator there are some Chinese restaurants, but they are dwarfed by the number of Korean restaurants. Not many Chinese goods are in stores. The only Chinese person I met was a pimp in Bayankhongor. I think he makes sure to meet everyone by hanging out in front of the supermarket. “The Chinese Pimp of Bayankhongor” might be the title of my first novel. 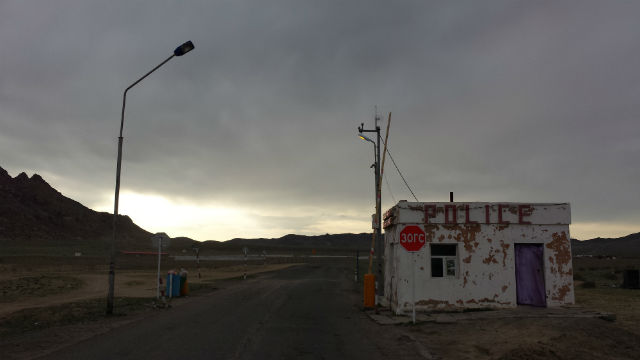 An abandoned police post on the outskirts of Khovd at dawn.

I learned a couple of things that had been nagging me from the Aussie owner of the fabulous Fairfield Guest House in Tsetserleg:
—The government subsidizes Toyota Priuses which explains the glut of them, but the Japanese can’t throw them a bone and make them left-hand drive?
—It’s rained plenty and I have passed many big rivers, so why is there no agriculture, no irrigation, no greenhouses? There are, I learned, some greenhouses and some light irrigation, but the problem is that the growing season in this harsh climate is 100 days. Corn, I was told, takes 110 days. 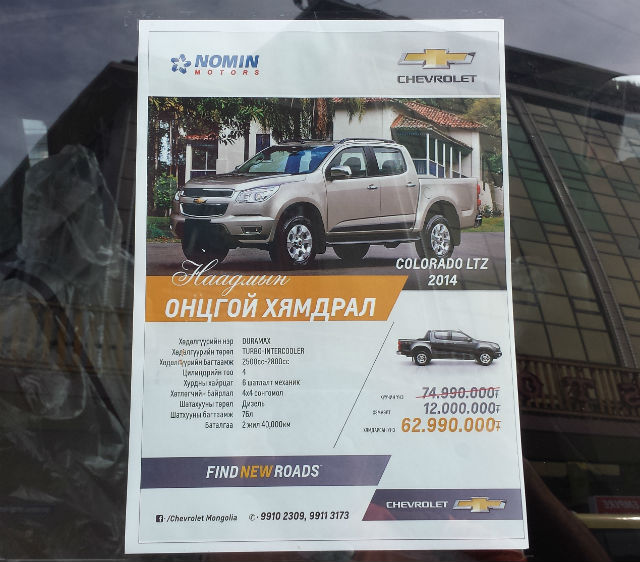 Ever wonder what happens to new cars that don’t sell? They get sent to Mongolia! How are 2014 Chevy Trucks selling in Ulan Bator? Hard to say. Probably not well. I wonder if Mongolian car salesmen put on the action slacks and go into full huckster mode because it’s an American car: “My friend, I can put you in this baby for 74 million—no, tell you what I’m going to do. Don’t tell my boss, but because I like you, I’m going to slash this price right now, right here, down to 62 million…” (2100=$1).

I can’t convey in this photo how many camels were here and how amazing it was to see them. They were densely packed in tight. It’s incredible to come across this after hours pushing through the steppe, far, far away from everything. 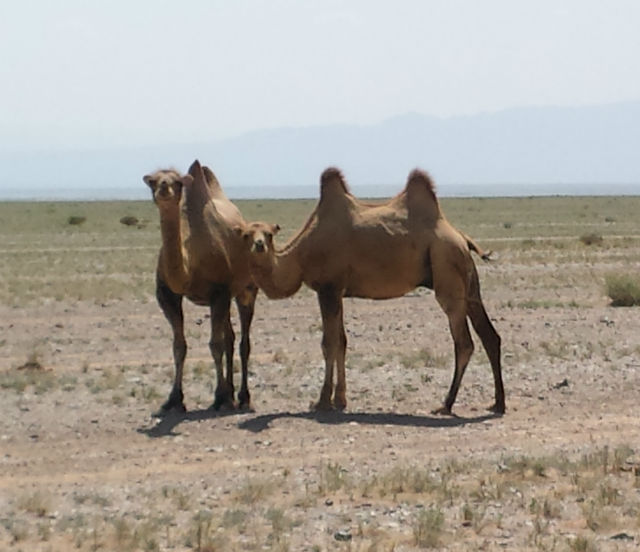 These two camels were checking me out. Can you see how if I had a real camera, this would make a great shot instead of having washed-out colors? Nevertheless, I can’t ever foresee traveling with a real camera. It’s too much weight and too much space. 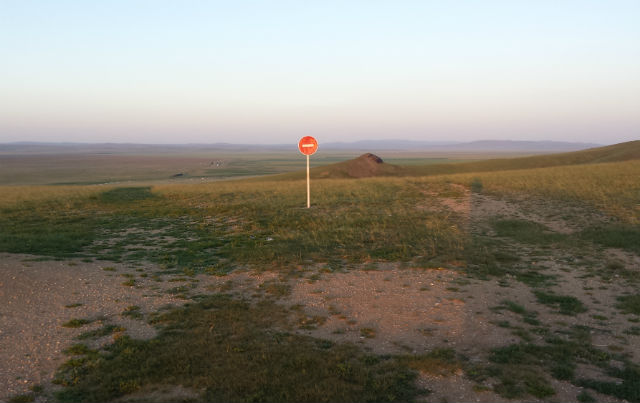 Mongolians don’t seem to obey many traffic signs on the roads, so it’s doubtful that they would on a grassy hillside. 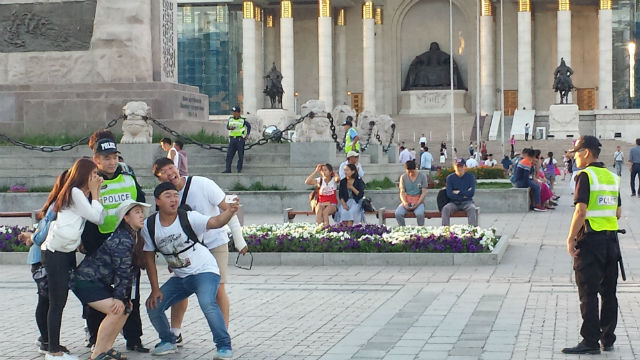 It’s amazing the police put up with these numnuts. I would have pistol-whipped them.

How is Mongolia done completely half-assed? By not getting off the main roads. They are hardly “roads” in the traditional sense, but the way to see Mongolia is to hire 4×4 transport and get out into the Gobi Desert, say, or the mountain range behind Olgii, or there are so many little-explored places in this massive land.
I know the perfect comparison. It is like if a foreigner came to San Diego and drove I-5 up to Seattle, never veering far away from the road. (I-5 is the boring highway that bypasses the best sights: the California coast, San Francisco, etc.) On the other hand, maybe the foreigner still enjoyed himself with what he saw and the people he met. Who’s to say it was a mistake?
On the third hand, I could have joined a tour and seen some stuff. I still have some Yahoo money and it’s unlikely I will come back to Mongolia when Africa is screaming my name.
This is the kind of thing I dwell on. Often.
PRACTICAL INFORMATION:
At the train station they told me the cheapest ticket on the Trans-Siberian to Beijing is 255,000 tugrik and to Moscow, 426,000 tugrik. (2100 tugrik = $1.) There is a different price if the train is Russian, Mongolian or Chinese, with Chinese being the cheapest and Russian the most expensive, but the difference is small. 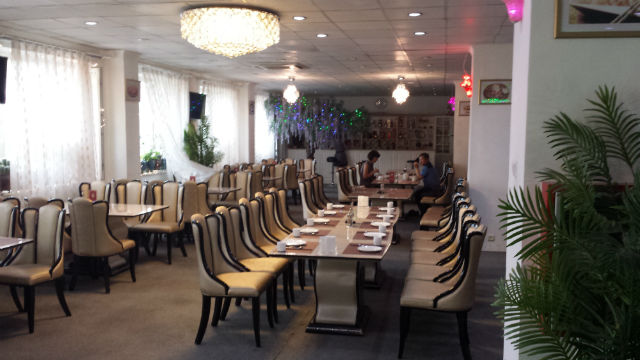 Another dramatic difference between Ulan Bator and everywhere else is the food. The menu in the countryside is limited, let’s say. I don’t mind it; I have a strong capacity to eat the same stuff day after day, but I was also hoping to find good-looking bananas for under $4 a kilo.
I read about all the international foods in the capital—even Mexican food is now in town—but I ate Mongolian food every meal. I made one exception: I went whole hog exotic once and tried North Korean food at Pyongyang Restaurant. I felt a little bad contributing to Kim Jong Un’s coffers all in the name of an experience, but there were only two other people in the restaurant, so I think they lost money on this night. 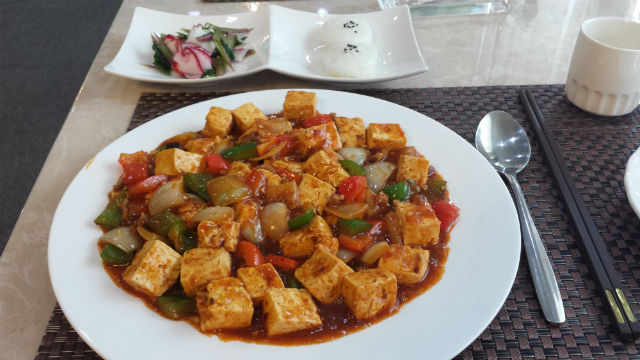 This isn’t exactly North Korean food—but how many people can say for sure? Maybe they eat chili cheese dogs for all we know. This is more like Chinese mapo tofu. I haven’t had tofu in forever, so I flinched. It was bland. I am going to claim racial profiling; white people can’t handle spicy, they must think. $10.