If I ever finish the redesign of my website, one focus will be to encourage Americans to travel.   I think a stumbling block is the perception of bus travel, and as one example, the anxiety of dealing with bus stations.   Bus stations in big city America are unequivocally horrendous, seedy, crime-filled places, and I imagine the thought is that they must be exponentially worse in developing countries, but it’s largely the opposite.
This picture of San Gil’s station below with the four sleeping dogs is typical.   Sure, San Gil is a small town with a somnabulant station, but Bogota’s terminal could also be good for a nap.   It’s very orderly and chaos-free.   My only beef is with the maniacal bus drivers.   The buses themselves are fine–and more expensive than they need to be, given local wages. 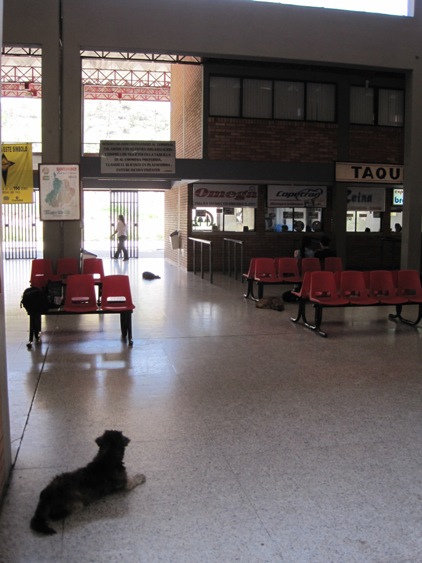 Bogota’s historic quarter is called La Candelaria.   I had been there twice before, but this time for some reason either I saw it with new eyes or I simply forgot about it, so it was a revelation to be there this time.   It has some very pretty side streets with some curious names: 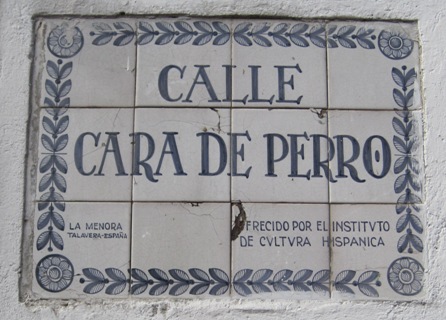 It was near  there that I stumbled on to an amazing little restaurant called Triptiko. What you see here is a potato/yucca-based soup called sancochito with Florentine rice, passion fruit steak, a fried banana, terranova salad, the world’s smallest dessert and next to it, a glass of curuba juice.   (Viviana insists Colombia has more fruits than Brazil.)   This is 5500 pesos, just under US$3.00. 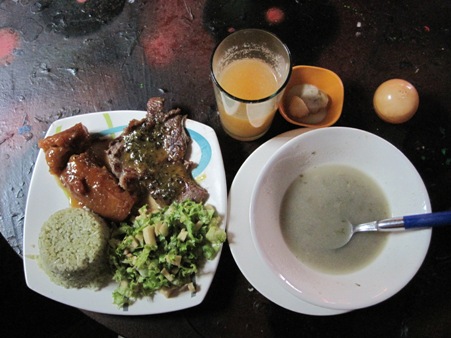 Tonight I went to a Couchsurfing get-together for people who wanted to practice their English. I was surprised to see a good 40 people there, with only 3 or 4 gringos.   This is an underrated aspect of Couchsurfing, another thing I will expand on in the website redesign.   Couchsurfing is a great place to do activities together, to rent a room, to buy and sell stuff, and to meet new people.   It isn’t just about staying with someone in their homes. There are groups and in big cities where it is well-organized, lots of sub-groups for cycling, practicing English, weekend excursions or whatever.