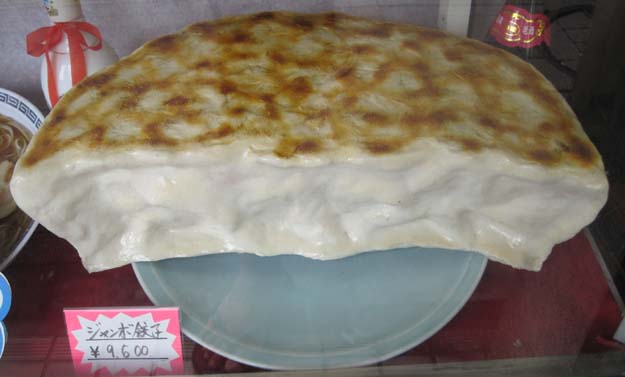 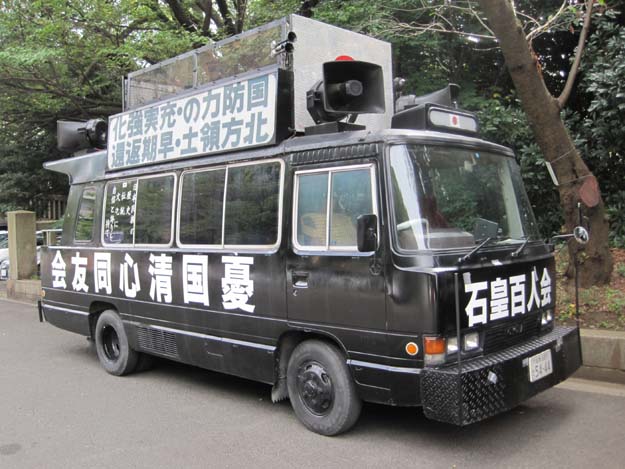 Japanese ultra nationalists drive around in vans and buses looking like this and blast propaganda. Somehow they are allowed to park next to places like Shinjuku train station, the world’s busiest, where someone will stand on the roof with a megaphone and no one pays attention to them.
This is at the Yasukuni Shrine which is infamous outside of Japan because Japanese war dead are buried here together with war criminals. However, in a land without any zoning laws, no one can be surprised that everyone is lumped together like this. Every year the Japanese prime minister goes to the shrine on an auspicious day to pay respects, and every year other countries complain about it—but this year the prime minister didn’t go. I was surprised. Politically, I think that the Japanese are always aware of how they are perceived in America but are oblivious to what other Asian countries think. Japanese people don’t seem to understand that they are generally disliked in Korea and China, for example. 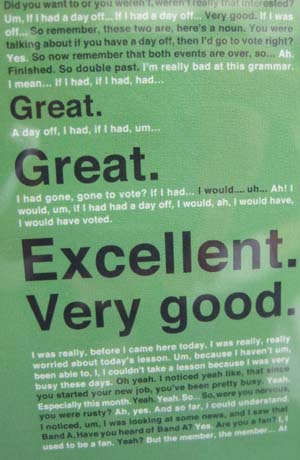 I saw two different ultra-nationalist groups in full uniform preparing for something (a rally?) at the same time that a big group of yakuza (Japanese mafia) was sweeping the path leading to the shrine.
My business at Yasukuni was for a humble flea market. I didn’t buy much; too many pros were selling expensive antiques, but it’s fun anyway. I like to haggle, but in Japan I don’t do it aggressively. (In other countries when I do, I am sometimes asked, “Are you from Israel?”)

On the right here is a small chunk from a large poster of the same gibberish from a chain of English schools. Japanese have a hard time learning English as it is, and this doesn’t help. Japanese are famous for not speaking English well, but you could be surprised by how well they can write and comprehend. I am always amazed at how much English is in everyday Japanese language. There was even some semi-serious discussion to make English an official second language in Japan. At the same time, there is more-serious discussion about whether to abandon the JET program that brings young native speakers over here to be assistant English teachers. I hope they do only because I wish I was accepted as a JET when I applied! But I’m not bitter…
Unless I change my mind, I am going home tomorrow. I have changed my reservation at least five times already, so don’t put it past me.