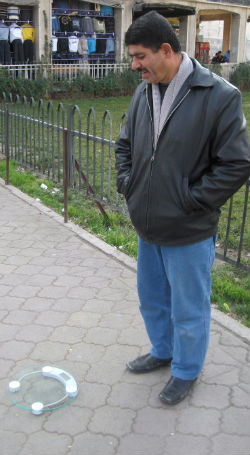 Every day in Syria I get into it with the scale men, guys who take their bathroom scales and plop them down on the street, charging passersby to weigh themselves. (I am thinking of starting the same business in America; I see franchise potential.)
But the scales never work right. They are all skewed high, and I let one guy have it:
"Sahib, how can you sleep at night when you are out here deceiving people with this inaccurate scale?"
"What are you talking about? I calibrate this every morning to internationally accepted standards per United Nations Agreement B-77e on Protocols Regarding Weights and Measures."
"Pfffft! I just wasted 15 cents that could have been spent on a warm chocolate croissant."
He pokes my stomach. I thought he might break his finger on its steel-like hardness, but I was mistaken. He smiles and looks me in the eye, “Friend, who forced you to eat the whole plate of halawet el-jibn when you were ALREADY FULL?!"
He’s got me on the ropes. “But you don’t understand,” I stammer. “It was made fresh! The halawet el-jibn’s nutty, cheesy, sweet goodness is a subtle meld of complementary flavors that were at its absolute delicious peak!"
A deflated silence hangs over us as we are both instantly aware that the battle has come to an end. He raises his head and nods triumphantly before lunging with a final dagger to the heart: “Next time I’m charging you double, Fatso! Now get out of here!”

The halawet el-jibn in question. How did he know?