My last day in Somaliland I was hitchhiking in Hargeisa and a Kenyan man picked me up. He claimed—and I have to quote him—“Nairobi is like London.” I’d never been to Kenya, so who was I to refute that?

I paid my $33 airport tax (tell me again: Somaliland wants tourists?) and embarked on my Jubba Airways flight, their slogan being, “The Happy Way to Fly.” Who are they fooling? They take some tired, decrepit Russian (Soviet?) 737 with Allah knows how many hours of flights on it, slap their name on the side, and this is the happy way to fly?
That said, I enjoy it when they announce, “We wish you a pleasant flight, inshallah (God willing).” 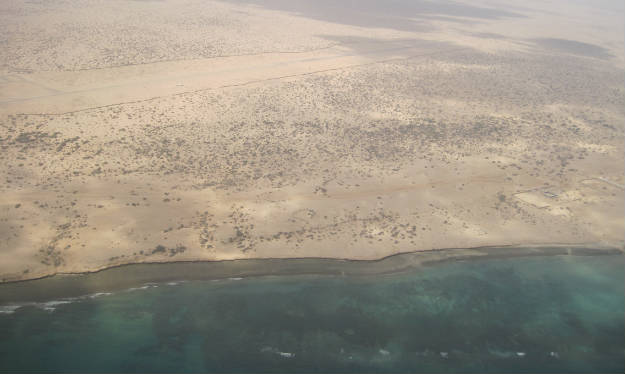 An aerial view of Berbera Airport, it of the aforementioned super-long runway. How long is the runway? The runway is soooooo long that from the terminal I saw our plane (coming from Dubai) land towards me, and by the time it came to a stop, it was still far away.

A funky view high above Djibouti 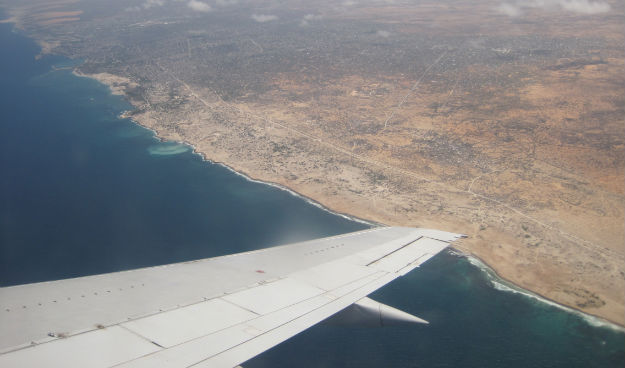 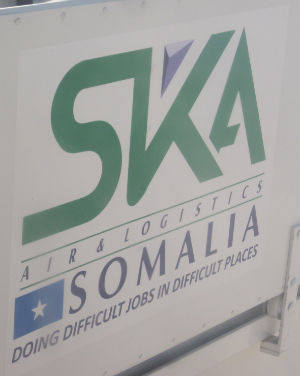 I woke up at 3am to catch the bus to catch the plane, so I was tired, but how can you sleep when you’re about to land in Mogadishu?
There was no Baghdad-style corkscrew landing. Maybe safety is improving. In fact, the airport looked downright inviting. It’s right on the beach, parallel to it, and not some phony San Francisco or Osaka landfill airport, but small waves lapping against the rocks right next to the runway.
Mogadishu airport looks a hundred times better than JFK. 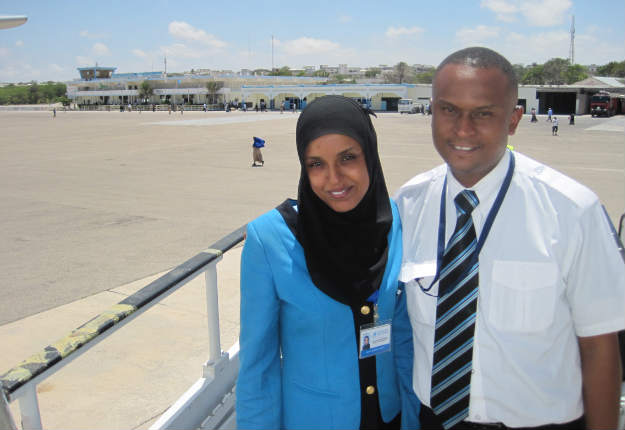 Mogadishu airport with a couple of the flight crew

I thought of jumping down on the tarmac so I can have a few hours’ argument with my friend Graydon about whether this constitutes a visit to Somalia, but instead I took photos of the flight attendant’s hands. She has this henna design because she attended a Somali wedding. 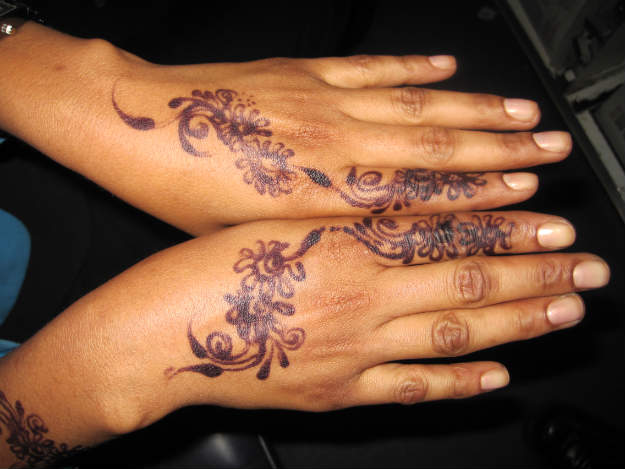 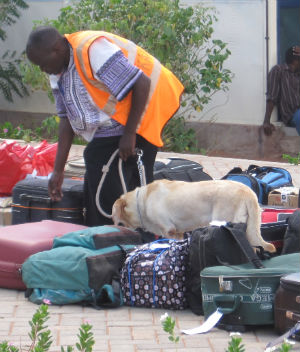 A police dog sniffing my green and black backpack. The stench of my dirty clothes made him consider early retirement.

We made a previously unannounced stop in the northeast Kenyan desert town of Wajir to go through customs and immigration. Someone mumbled that this was an extra security layer because we were coming from Mogadishu.
I had to step over the puke in the aisles to go stand in the tarmac heat so too-few Kenyan immigration people can process a plane-load of passengers. It wasn’t my idea of a good time, it was so poorly organized, but I was wistful for it by the time we got to Nairobi.
I didn’t need to show my fake onward ticket, but I was prepared. I had my “reservation” on Condor Airlines from Mombasa, Kenya to Frankfurt, Germany. If you are new to my website, I explain why this is a good idea about a third of the way down the page.
As we descended for the last time into Nairobi a flight attendant sighed heavily into the microphone and with impressive candor wearily said, “This is the end of a long flight day. We thank you…” Amen, sister.

Calm before the storm at Nairobi airport

For some inexplicable reason that was never announced, the system to get out of the airport starts with everyone on the plane looking for the guy with the list of everyone on the flight so he can give you a number that you go to another guy to say your number and then you can go through the metal detector for you and your bags, but the X-ray machine for the bags sends you in a different direction than the walk-through metal detector, which caused another bottleneck of angry people.
Then guys didn’t have the right lists, and most maddeningly, because you are supposed to be flexible in Africa, no one could explain anything; they just had vacant looks in their eyes and couldn’t speak, ignoring everyone. It exemplified the worst African stereotype that I had forgotten because in Ethiopia you can talk to everyone and have intelligent conversations. At the Nairobi airport they all just stood like wooden Indians that everyone fumed at.
Somehow I managed to get myself through, but then there was no signage to tell us where to go. It was one little thing after the other like that, and then the bags didn’t show up for nearly two hours after we had landed despite there being no other planes that had emptied itself of baggage during that time. Someone told me that Kenyan airports are trying to suppress other countries’ airline operations to boost up their own carriers, but whatever the reason, it couldn’t have been a worse introduction to Kenya.
While I sat and waited for my bag I discovered the airport had wifi. Free, fast wifi is usually the ultimate salve, but I was still on fire after getting into the terminal. I was waiting in line in a shop to make a phone call when a guy approached to shake my hand. “I am Patrick; you don’t remember me?"—an old confidence trick that I was in zero mood for. He was a huge man but I aggressively pointed in his face, “Not now! Don’t even try that with me!"

An Arab woman stood next to a Kenyan girl and they offered to help me, but the Kenyan girl asked me three times if I was alone, and three times I answered until I exploded at her, too: “How many times are you going to ask me?! What’s wrong with you?!”
She quietly said, “I was just trying to help.”
“How is my telling you three times that I am alone helping me?!”
The Arab woman said she had to take a taxi to town and we could share. I said I was going to take a bus to town, but I wasn’t sure I meant it as darkness was approaching and Nairobi, like Johannesburg, has a solid reputation of being dangerous that will take generations to shake. She tried to talk me out of it. She said that it wasn’t safe. “I’m Kenyan and we’re scared in our own country.”
I realized I was acting like an idiot, and I could see that she had my interests at heart and she was right. I got in the taxi with her and she reached across to make sure my door was locked. 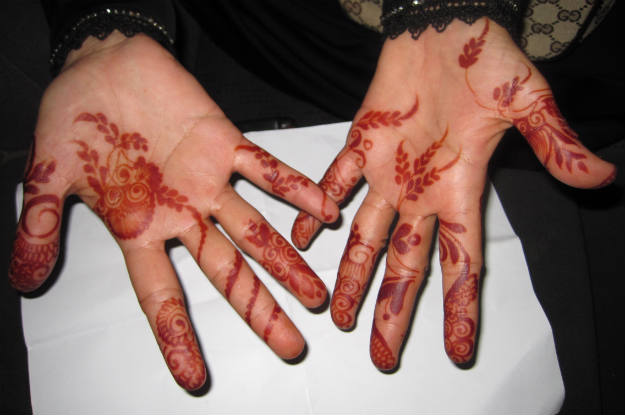 Of course I trusted Hamida implicitly because of her henna tattoos. I like the look. Why hasn’t this caught on in America or Europe?
Maybe I know why. Hamida was scratching her hands the whole time as the henna irritates her skin, but she said she did it because her husband likes it.
I asked, “Does your husband do something for you?”
She made a face and threw her hands out in front of her, meaning no.

Our taxi driver was reading a book called, “Smart Women Finish Rich”. I asked why.
“Because I want to be rich.”
“But you’re not a woman,” I reminded him.
He looked at me in the rear-view mirror and said, “They are smarter than us.”
The taxi dropped me off first. I tried to pay my half but she took only a fraction. I insisted, but she wouldn’t hear of it, so I went with another tactic. I argued, “Your husband will be angry at you for throwing away money like that!"
She parried, "He doesn’t know how much money I have!"

While I am piling on Kenya (don’t worry, it is just a temporary thing; I’m slowly becoming jazzed to be here), before I came, the image of Kenya that was etched in my mind was from this seven-minute documentary on CurrentTV, my favorite TV channel, particularly the disturbing segment starting at 3:01. There’s nothing uplifting about this film, but it is well done. Have a look.