This is the 25th anniversary of my traveling. For 25 straight years I have been going on pretty long trips (in excess of three months, I define it) and exactly 25 years ago this summer I flew to Brussels, Belgium to begin my first trip. I remember the hostel I stayed at, the Sleep Inn, and I remember going to the receptionist and telling them that all the toilets were broken. He checked, said they weren’t, and I learned that European toilets don’t have as much water in the bowl as American ones. I argue that it’s this kind of deep inter-cultural understanding that prevents world wars. (If you are into foreign toilets—and who isn’t?—I have a webpage for you.) I might reminisce more later but I don’t want to bore people when I am so close to discussing the national food in Belgium, french fries.
A few weeks ago in New York City I wrote about going to a Belgian french fry place, a frituur, in the heart of Manhattan. In Belgium I am always corrected when I say “french fries”. It makes them crazy, this deep inter-cultural misunderstanding. “Belgian fries!” they protest.

A large 'frites' on the left with mayonnaise and a small with tartar sauce on the right. When we told the owner that a large in New York goes for 6 euros, as opposed to 2.20 euros here, he said I should study under his wing and then open my own frituur in New York. I'm thinking about it. I have nothing else to do.

Fries are serious business in Belgium, the world leader in per capita consumption. Even the Wall Street Journal had an article last week about the fate of the traditional “frites” potato, the bintje. Part of the uniqueness of Belgian fries is that they are fried twice in ox fat. It’s definitely not a diet food, if you were unsure. I’m still bloated a day later. Also, the Dutch use sweetened mayonnaise, which horrifies most Belgians. I like both, and mayo only sounds disgusting if you have never had mayo here (or in Japan; they are halfway to french fry heaven.) 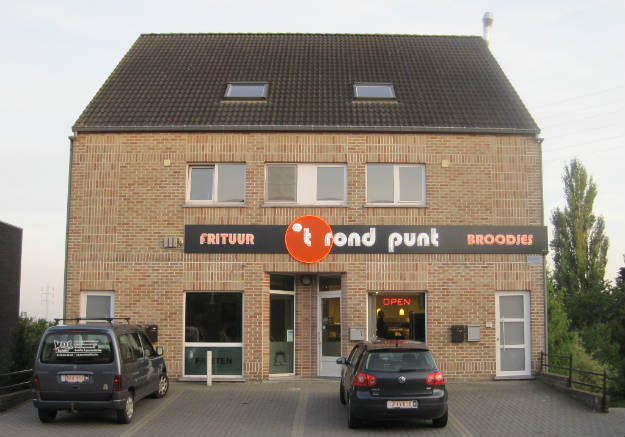 Big building for a french fry place. You know they take it seriously here. The Round Point, Tienen, Belgium 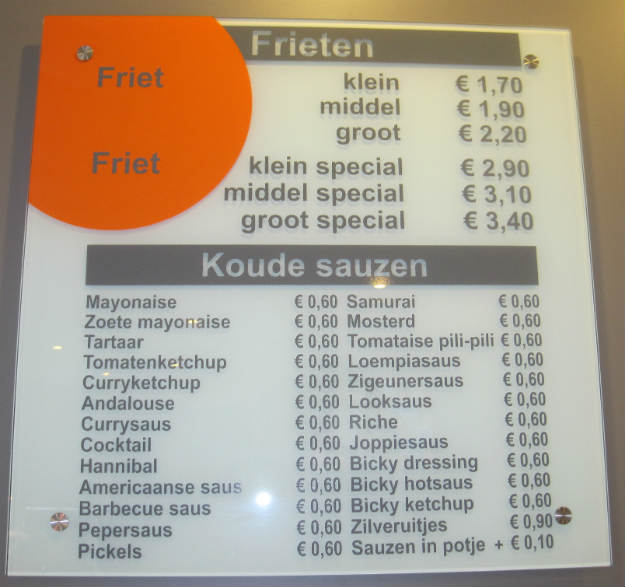 Hannibal sauce? Bicky dressing? Samurai? I can only say that 'Americaanse saus' is rumored to be spicy. 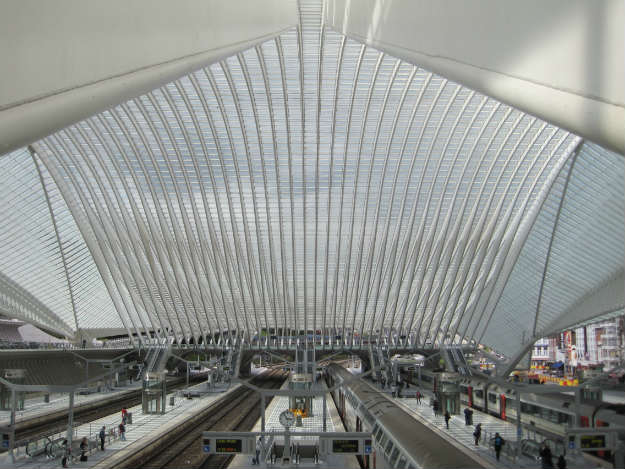 The new ultramodern train station in Liege, Belgium. Great to look at, but anti-traveler with poor signage. I can't let that go. A station is meant for the people, not for architecture fetishists.