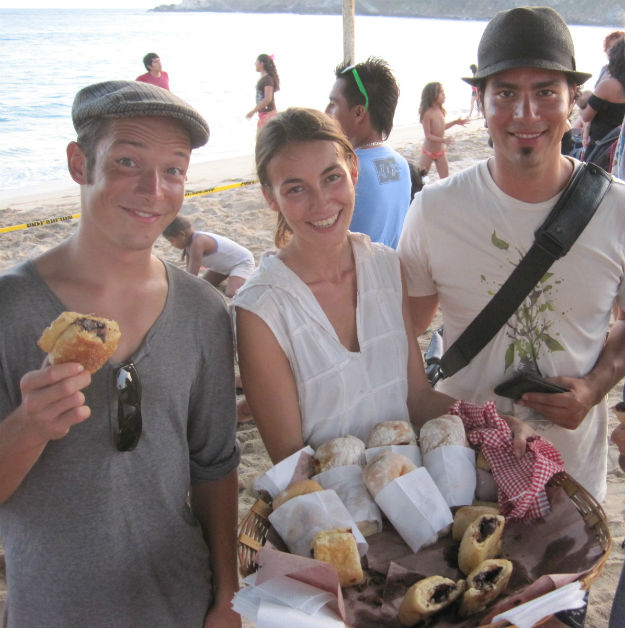 The two guys here, Arthur from Austria and Max from Quebec, I met in a hostel in Oaxaca, and found them both in Mazunte. Stefanie in the middle runs a nice little bakery in town called Panaderia La Primera. It turns out that Arthur and Stefanie are not only from the same town, Innsbruck, but they went to the same primary school together, they discovered. Small world, but let’s not be distracted from these chocolatines in the front of the basket (10 pesos each. 12.5 pesos = US$1). Mind-blowingly good. The pan de relleno in the back is tops, too.

Mazunte
I’m a shade less than an hour east of Puerto Escondido in the village of Mazunte. Took the bus to get near here and then twice I hitchhiked short distances with a female friend I am traveling with, both very easily. Funny how it is easier to hitchhike with a girl. Who knew?
It is veeeery nice to swim on this coast. The water is a perfect temperature, it seems clean enough, the beaches are as clean as could be hoped for and Mazunte has some shady spots on the beach if skin cancer isn’t your goal. Most places are very quiet as it is low season for reasons I haven’t figured out yet. There’s a nice mix of locals, travelers, hippies, Austrians and low-key restaurants. 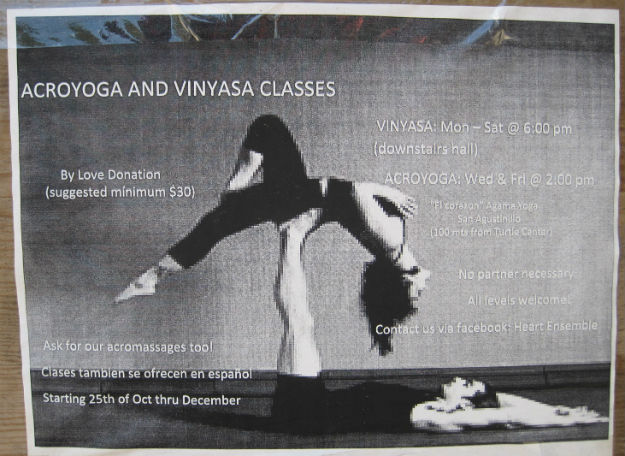 This kills me. A love donation—but it’s suggested you pay a minimum of 30 pesos and no one gets hurt. 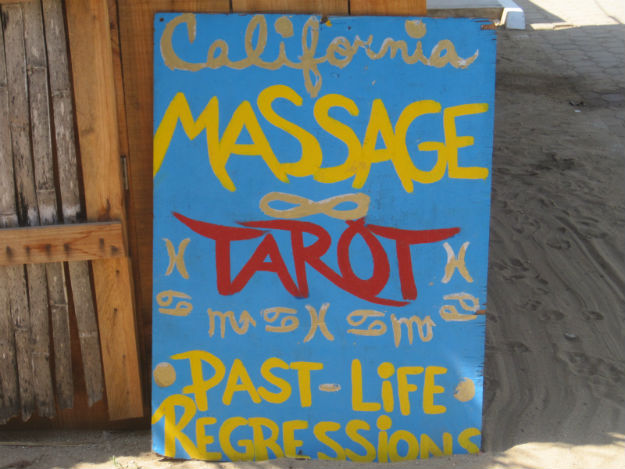 I was born and raised in California and even I had to have ‘past life regressions’ explained to me. 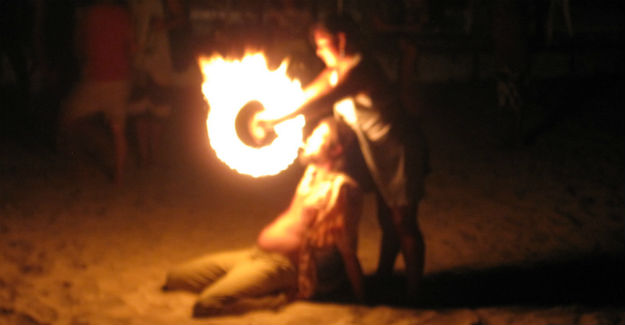 Come on baby light my…FIRE! This isn’t my paunch, but if I maintain my pace of chicken mole tamales, I’m headed that way. 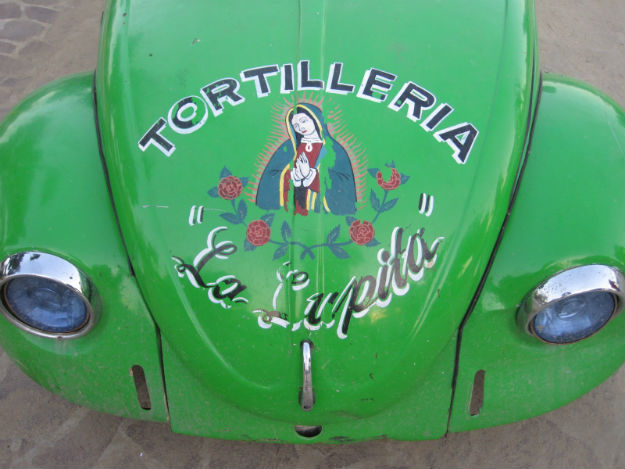 There was not one but two of these cool Tortilleria VW Bugs zooming around town.

On a dusty corner lot I got talking to a 20-year-old guy working at a roasted chicken place. He was planning on heading to work in the tobacco fields of North Carolina with his brother, who is already there. His brother claims that he can make $100 a day working 14-hour days in the fields, seven days a week.
His plan is to pay a coyote (human trafficker) in Puerto Escondido a love donation of 25,000 pesos ($2000) to get him across the border and he thinks he needs only two years to save enough money to build a nice house here for his wife and son.
He seemed to be aware of the risk and the danger of trying to cross the border. He said it was common for people in the area to go to America because wages were simply too low in Mexico to support a family. The increase in tourism along the coast didn’t seem to affect wages. (What does?)
He earns 100 pesos a day working at the roast chicken place. A better job might pay 200 pesos a day, he said, but it was still impossible to save enough money to have something better than a shack built of sticks with a linoleum floor if he didn’t go to America. 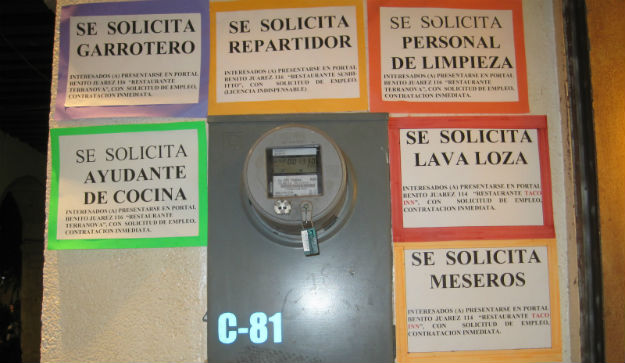 Everywhere I’ve been in Mexico are tons of job openings. I’ve never seen anything like it.

I always wonder about the pull of Mexicans northward. It’s always said that the sense of family is very strong in Mexico, and yet it is common that young, able-bodied men and women go off to America to try and make better money. There is pressure on these migrants to support their large extended families which are the result of a lack of family planning options. This in turn is due to the heavy presence of the Catholic church in Mexican society especially as it relates to abortion. I read that the municipality of Mexico City and the country of Uruguay are the only places in all of Latin America where it is legal to have an abortion. (Uruguay just changed its laws a few weeks ago.)
Mexico seemingly has so much and Mexicans are hard-working people, so why is it relatively poor? One reason has to be the failure of the government which is lazily reliant on foreign remittances that take the place of a functioning economy.
I haven’t thought it all out yet. Let’s move on to nearly-dead hippies.

Zipolite
Less than 10km east along the coast from Mazunte is the village of Zipolite, which is an indigenous Zapotec word meaning “Beach of the Dead”. How quaint! It is famous for being a hippy hangout, but the hippies are a ragged, scraggly, sickly-looking bunch. They appear ready to die at any minute, which would be great as I need a new backpack, but they give me the skeeves. I have no problem with my shanti-shanti travel brethren per se, but something is decidedly unappealing about them. 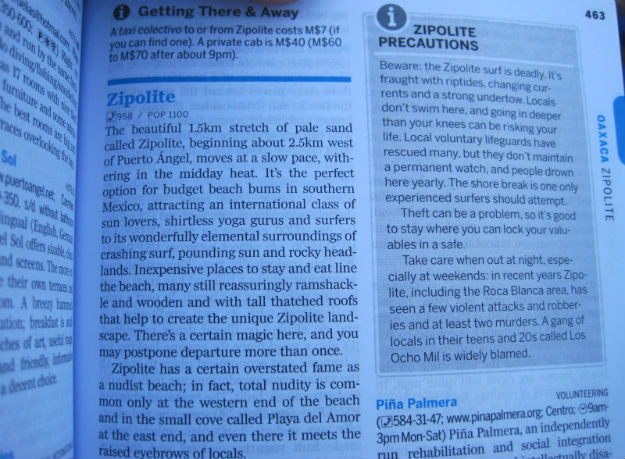 The Lonely Planet page for Zipolite is schizo. It is like they are describing two different places. Come for the beauty, the wonderful surroundings, the magic—but live in fear of the violent attacks, robberies and murders by a bloodthirsty gang, all in a little village of 1100 people! Incredible. 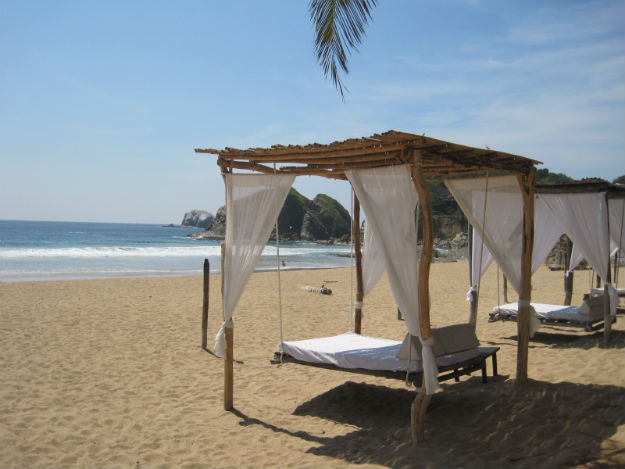 I went to South Central—I mean, Zipolite—as a day trip from Mazunte and survived.

Practical information:
Accommodation in Mazunte is tricky business. We stayed in the Hospedaje El Mazunte across from the Turtle Center for 200 pesos. I’m sure they will get wifi before they get seats for the toilet. Options in Mazunte are spread out and it is very hot to walk all over with your backpack, so I say pick any hovel for 100 pesos or less if you are alone and then check other places out later. What’s that? You will only be in town a couple of days? Pffft. Everyone says that, and then they have Stefanie’s chocolatines.