Short mailbag question from Shane in USA:
“Hate to ask this question, but really curious…cartel issues? Mexico has such a bad rap right now.”
Since Mexico is often in the news for all the wrong reasons, a lot of people must be wondering how safe Mexico is to travel. I like to think I’m not naive, but on the ground here I don’t see where the intersection of drug violence and tourism is. It may be because of my route, which has been southward from Mexico City: Puebla-Oaxaca-Chiapas. All I can say is that in one month of traveling, I haven’t seen anything out of the ordinary. In fact, if you had never heard of all the drug cartel violence before you came, you wouldn’t know about it from being here. I’ve yet to hear a Mexican bring it up in conversation either, though they understandably might not be eager to discuss it.
I also haven’t heard of any anecdotal crime against travelers while here. However, it looks like the Mexico/Guatemala border is next, and it has me a little spooked. There are two documentaries about the “Death Train”, a freight train that Central Americans migrants take to cross the border to head north. Here are two interesting short clips about it, one is from Current TV which I’ve seen, and the other is from HBO, which I have not. Both are chilling. I don’t plan on using the Tapachula border to enter Guatemala, but I’m keeping my guard up. Central American border crossings aren’t a lot of fun in the best of times.

I’ve had no trouble at all thus far but I wouldn’t suggest Mexico is as safe as, say, Japan. I have been frequently warned about running around at night, but that is a normal precaution for traveling anywhere, along with it being poor form to yell to your friend across the room, “I’ve only got $100 bills! Where can I get change?” and “Hey! What’s the most I can take out of an ATM machine at one time?”
I’d be very interested in hearing other travelers’ experiences in Mexico if you have one to share.
Since we are talking about safety, this gives me an opportunity to show these two photos and one short video of unusual stoplights in Mexico. Yes, I am the only travel freak who takes photos of stoplights in other countries. Mexico is also stoplight friendly at immigration in airports. When you pick up your bag from the carousel and go to customs, there is a stoplight. You press the button and if it is green, you pass, and if it is red, they open your bags. 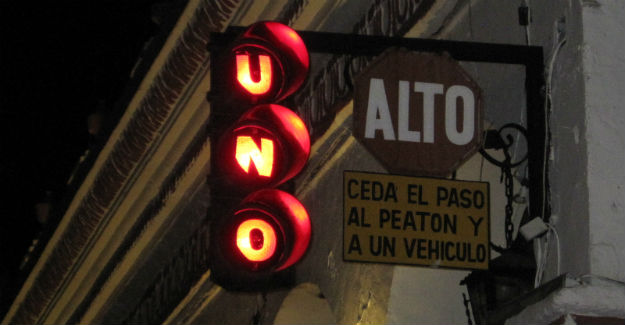 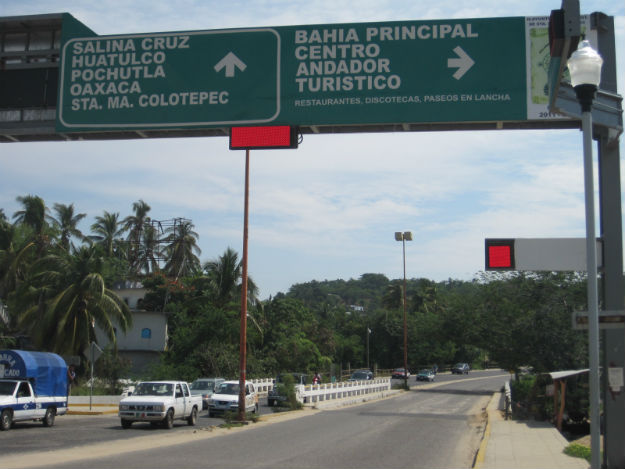 Practical tips:
Have you ever had a breakfast in a hostel that was any good? I can’t remember any outside of a few in Europe. If a hostel price includes breakfast, I always ask if the price is lower without it. I’m not a coffee drinker, though, which I know has an almost-immeasurable value for some travelers.
I ran into Arthur Austria and Max Quebec again in San Cristobal and Max told me a great tip: if you want to know if any underground stuff is going on in town, visit the local skate shop; they’ll know.