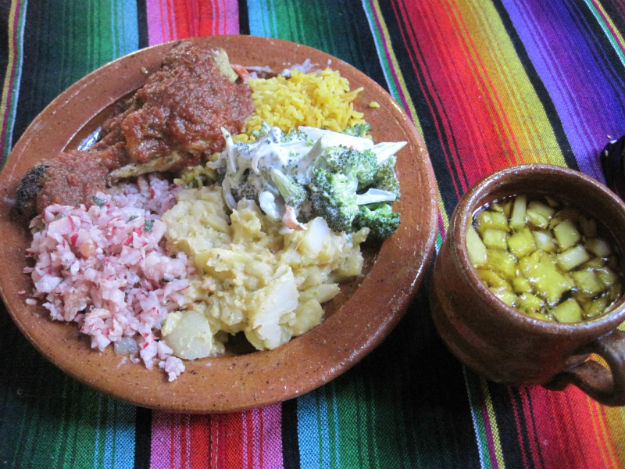 Chicken, broccoli, rice, potatoes, radishes, and a drink of pineapple juice with chunks of pineapple.

I was going to write about medical tourism in Guatemala next, but my friend’s maladies haven’t fully played out, so in the meantime I need to share gastronomic and lodging secrets—another free gift from The Dromomaniac! Thank me later.
The food find of the city is a breakfast and lunch place called Rincon Tipico (Typical Corner) on 3a Avenida Sur #3 between 5a and 6a Calle, or from the southeast corner of the main square, it’s one block east and one and a half blocks south. You know you’re near when you see billows of smoke pouring out on to the street which makes you pause for a moment to wonder if the place is on fire. You have to enter evacuation-style through a haze of smoke and when you get through and stop coughing you notice the cause of this smoke: a girl standing with a hair dryer in her hand, blowing on the grill. (Finally, I’m qualified for a job. I wonder how that would look on my resume: “Rincon Tipico Restaurant, Lead Hair Dryer, 2012-2013.”)
It’s not really a restaurant, but a temporary set-up in a garage. There isn’t a menu either. Every day there is a selection of roast chicken, beef or pork, longaniza or chorizo (both are sausages, but the chorizo I’ve seen on this trip is much nicer than the mysterious gooey stuff found in American supermarkets) and sometimes a surprise or two, plus several side dishes and a drink. The total for this feast is 20 quetzales (7.88 quetzales = US$1) making it the Holy Mother of All Deals Beyond All Reasonable Doubt. It isn’t just cheap, though. I wouldn’t eat it every day just because it is a great deal. OK, that’s a lie, I totally would, but really, it is full-on delicious. 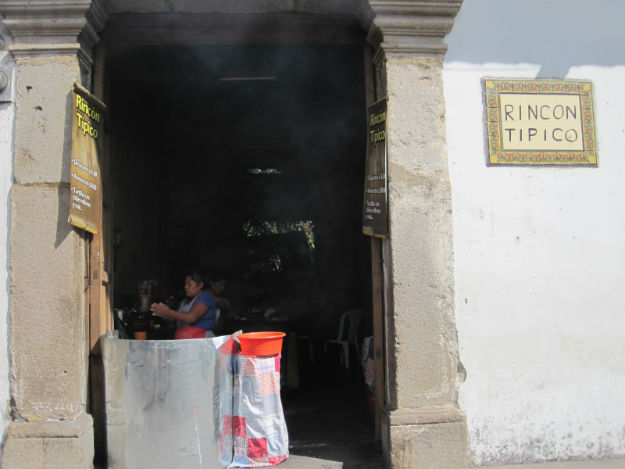 It’s the most uninviting pic ever, I know, but this is the view from the street when it doesn’t appear to be a five-alarm fire. 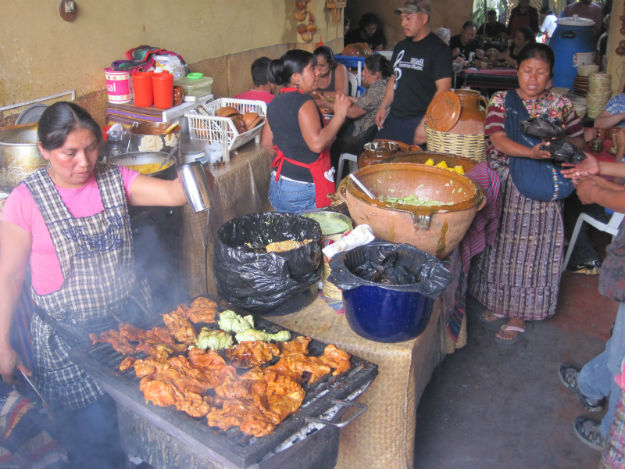 Hair Dryer Woman—I’m coming after your job!—with big pots of the side dishes behind her. 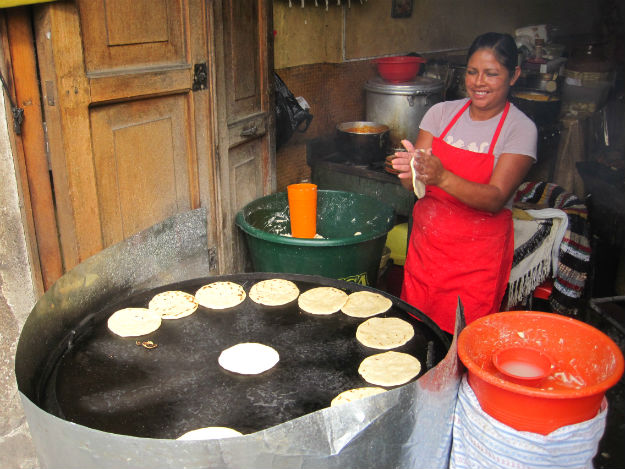 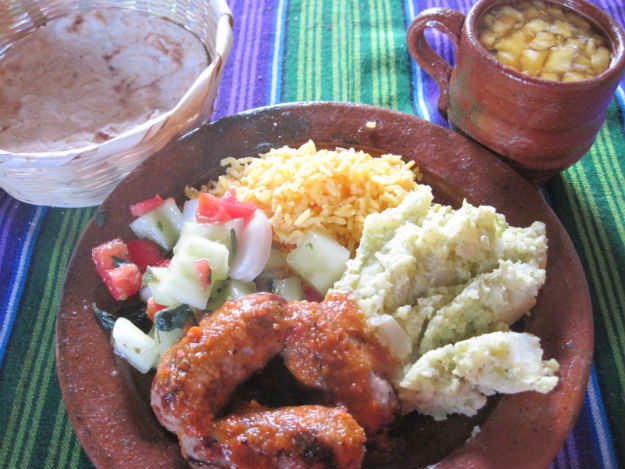 Longaniza is a sausage that is usually fatty and spicy, but here tastes more like a lean herb sausage. 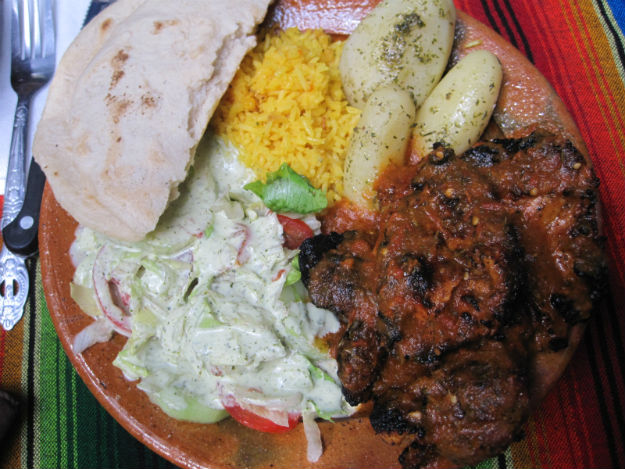 The pork adobado, my favorite, with all of this for lunch means you aren’t hungry for dinner. 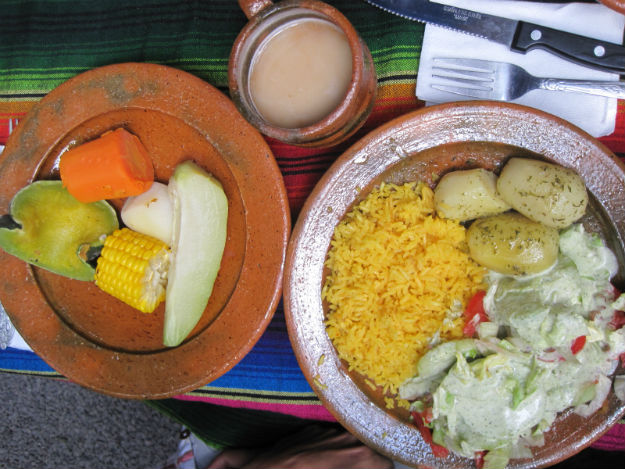 A vegetarian meal is only 15 quetzales. The muddy-looking liquid in the cup is horchata, a rice and cinnamon drink, very nice and smooth unlike most horchatas I’ve had. 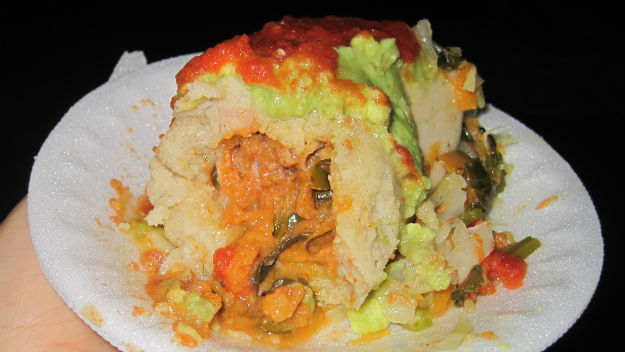 In the evenings when Rincon Tipico is closed, I often go see an old woman named Juana who sells tamales called chuchitos on the corner of La Merced Church north of the center. 5 quetzales. Don’t be shy about yelling your order as she’s very hard of hearing.

The best hotel is above a German sausage place called Wurst Eck (Sausage Corner), but there are only a couple of rooms and it appears to usually be full. In fact, I am reticent to say more about it because I don’t want someone among my vast, vast readership to steal it from me. It’s US$250 if you stay a month or we pay 100 quetzales ($12.65) a night for the cleanest, most modern place I’ve stayed on this trip very near Parque Central and yet quiet. That’s all I’m going to say. Shhhhhh…..

Practical information:
Dealing with money is surprisingly full of hassle in Antigua. There are ATMs on the north side of the main square, Parque Central, that steal your code and clean out your bank account. It seems to be a well-known secret that no one can do anything about. (Do a search for “atm scam antigua guatemala” and see the results.) I use the yellow 5B ATM machines and have yet to have a problem, but I check my bank account online every day to be sure.
If you bring cash, bring US dollars, and if you bring US dollars, bring them in denominations of at least $50 or no bank will take them except for one. I asked a couple of banks what is so special about $50 bills and they say “politicas” (policies). When I tell them that that’s not a reason, they shrug their shoulders. The only bank that will change any denomination of US dollars is BAC on the west side of the Parque Central, but there is a $100 minimum, the process takes a bit of time and they charge $1.50 commission.
If you want to hang out in front of Yellow House Hostel and suck some wifi, the code is 7B53F82AC3—but you didn’t hear it from me.
Why don’t you stay with me? You can follow along with RSS or subscribe to an email feed.