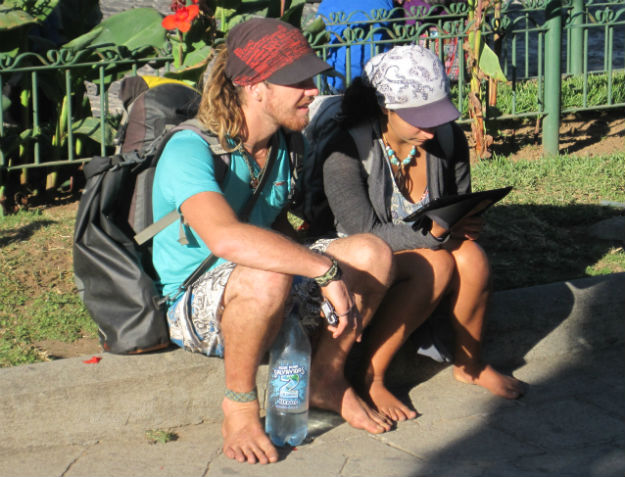 This kind of thing fascinates me: two shoeless vagabonds with a tablet computer. I see barefoot travelers all the time in Guatemala, but this is a very bad idea. There is so much broken glass on the streets and animal manure of various species that you become a prime hookworm candidate. My carefree shoeless days ended the first time I stepped on glass and had stitches in my foot. I was only nine years old at the time, but still.

So my friend had a bump on her back. When we were hitchhiking in Mexico we were sometimes thrown around in the backs of trucks as if in a blender as our drivers raced through the hills of Chiapas, and the bump became The Bump, then The Infected Bump, then The Don’t Let Me Die Here Because I Don’t Want Kent to Get My Kindle with Free Global 3G Bump, forcing her to engage in some medical tourism in Guatemala.
Enter Dr. Manuel Samayoa on 3a Calle Poniente #13 near 6a Avenida Norte in Antigua. He came recommended when we posted on a CouchSurfing group asking for local doctors. (The power of CouchSurfing!) Once at his clinic we were a little taken aback by the armed guard and a metal gate as extra layers of security. A Muzak, salsa-lite version of “Stairway to Heaven” drifting weightlessly above the waiting room could arguably be called a third layer of security, but it didn’t deter us.
The good doctor charged 135 quetzales (7.89 quetzales = US$1) for a consultation and then 225 for some injections. We also consulted a doctor in San Pedro, Lake Atitlan for 150 quetzales and another doctor in Antigua for 200 quetzales plus 300 more if we had let her cut the infection out, but at the last minute she discovered she didn’t have anesthesia. In the meantime we discovered Dr. Samayoa, who said it would have been a mistake to try and remove it so soon.
If you want cheap consultations, head to Comitan in Chiapas, Mexico where we saw a doctor advertising them for only 25 pesos (US$2). I wish I had taken a photo of a dentist office I saw that had scribbled the prices for all their procedures on a lime green sheet of construction paper and haphazardly taped it to the desk. 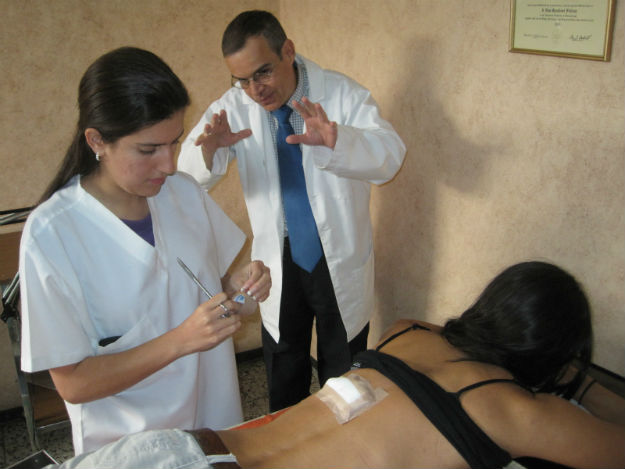 The ever-gregarious Dr. Manuel Samayoa, demonstrating…something. I have some fabulously disgusting photos of the wound, but don’t have permission to publish them. Friendship: it’s a double-edged sword.

Hey, is Guatemala dangerous?
Way back in the 1990s, Antigua was a well-known place to get pickpocketed on the buses arriving from Guatemala City. The bus would pull in to town and while everyone was trying to disembark, gangs of touts/scum would push back and climb on to try and hustle the foreigners into staying at their hotel. It was a zoo, and in the madness of trying to extricate yourself from the scrum, pockets were emptied.
In Mexico, other than the worldwide precaution of being careful at night, I never had the feeling of fear as I declared a few posts ago. In Guatemala, one is always reminded of lurking danger. There hardly exists a mountain, volcano or hill where you aren’t warned against thieves. In Antigua there is a little hill behind the town that makes a great viewpoint, Cerro de la Cruz, and it looks so accessible, but the risk of getting mugged is such that twice a day there are police escorts to walk up to it in addition to several police checkpoints along the way.
I met an Aussie girl who left her hostel in Quetzaltenango at 6am to catch a bus only to be confronted by an armed robber right outside her hostel door to the street, relieving her of her passport, credit cards and some cash. The appearance that it was an inside job makes it more distressing. I’d name the hostel but she wasn’t 100% sure what it’s called.
Even in peace and love San Marcos on Lake Atitlan, we were warned about staying in a particular area to the northwest of the dock near the water. San Marcos! I thought the worst thing that would happen there is to die from incense smoke inhalation, but no.
Antigua town is so beautiful and atmospheric it feels paradisiacal, but then I noticed the doctor’s armed guard and even a simple bakery has metal bars to keep the bad people out, and these are on a busy streets close to the main square.
All of that said, in the country with the eighth highest murder rate in the world (Honduras is number one by far), I feel fine and don’t hesitate to recommend it to anyone. Then again, I like almost everywhere and recommend everything to anyone at any time. Next up is the hectic capital, Guatemala City, which is said to be the last word in danger in Guatemala, so we have that to look forward to. 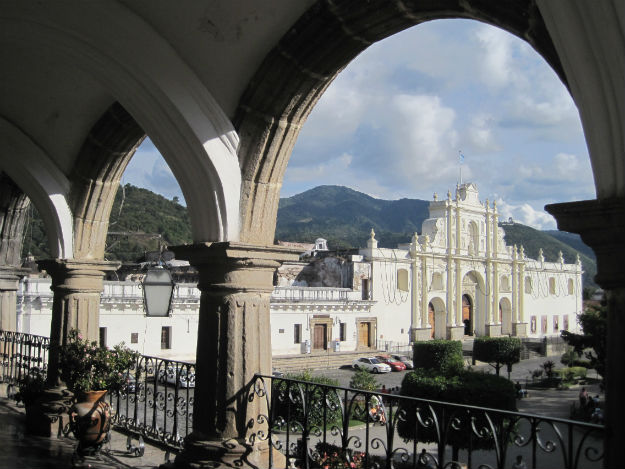 The cathedral on Antigua’s main square.

Speaking of a lack of personal safety, we hitchhiked from San Pedro, Lake Atitlan to Antigua in four easy rides. I was thankful for this as the very steep, ragged road up from the lake would be most unpleasant in the back of a stuffed chicken bus even though the lake views are—I’m sorry, I have to use a glossy travel magazine word—STUNNING!
The bus is probably very cheap. I don’t know what it costs, but I was happy to avoid it. Many travelers take shuttle buses, which I also wanted to avoid. A “shuttle" in local parlance is a van stuffed full of foreigners with their backpacks on the roof, paying a premium to be picked up from your hostel and driven directly to your destination. I’m pleased hitchhiking exists as an alternative, though I do feel a pang of guilt that this way of traveling doesn’t work for locals.
We were fortunate to get a ride inside a very nice, new truck up the hill. How did we get a very nice truck to stop for us? By waiting for a very nice truck to pass before we stuck our thumbs out! Despite all appearances, I am concerned about my personal safety and have it in my head that the more expensive the vehicle, the less likely I will have trouble from the driver. Also, it is one thing for me to hitchhike, but if a female is with me, I feel responsible for her welfare. After 1000+ km here and in Mexico, so far, so good. 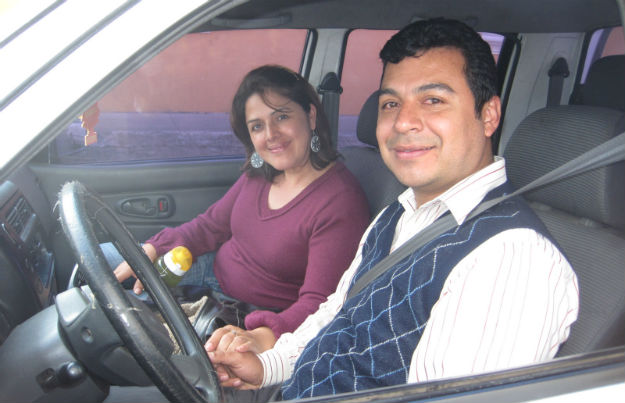 Everyone must be completely sick of the photos of people who pick us up hitchhiking, their happy faces, the pure, undiluted love that emanates from their smiles, but it is so incredible and I am so grateful that anyone picks us up, I can’t help it. Cut me some slack. 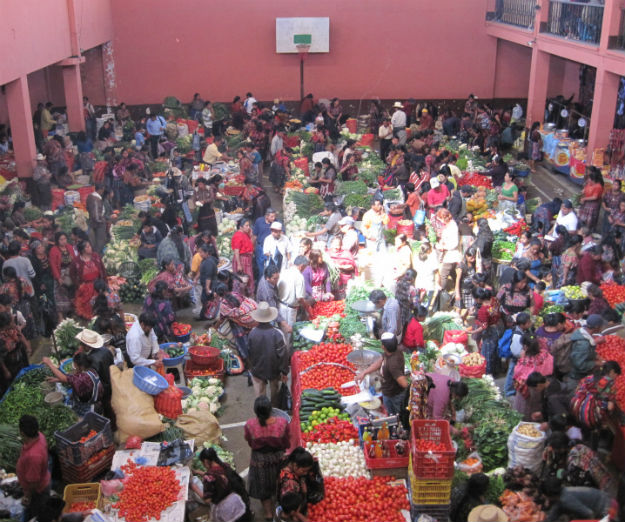 I forgot to mention that I made a day-trip to Chichicastenango, famous for it’s weekly market, but I don’t recommend it unless you are a hardcore shopper. This converted gymnasium was the highlight for me. 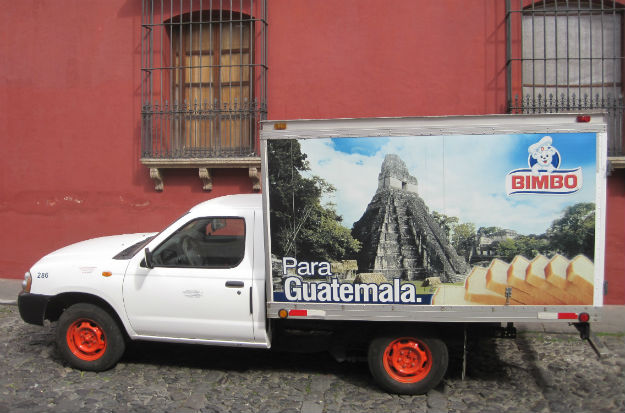 Practical information:
I’ve walked Antigua’s eight avenues and eight streets countless times for more than a week and have been lost an embarrassing amount. A while ago I was mentioned in the New York Times travel blog when they asked people what city confuses them and I said Antigua. I still say Antigua. It’s laid out on a grid, but every street looks the same due to a lack of aggressive signage and there is a mountain or volcano in the distance down every block which doesn’t help with orientation. I walked by a McDonald’s and a Burger King without realizing it. Not many places where you can say that. 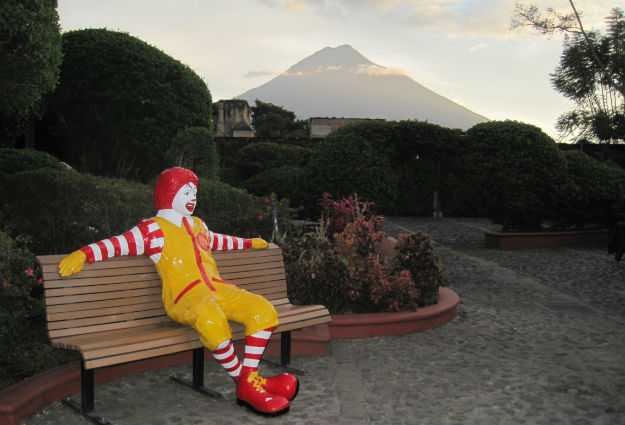