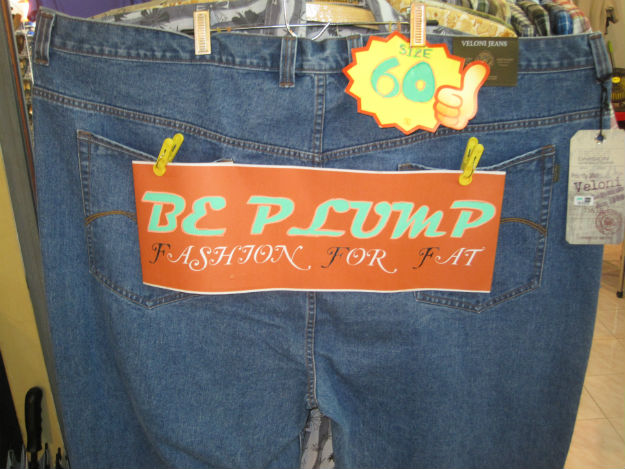 The Thais, they are very direct people, no mucking about.

Yes, it’s true, Thailand does night markets better than any other country I know, and I know a few countries. I gushed about them last time I was in Bangkok and northern Thailand, and I’m still impressed. The venues are often in attractive surroundings whether in Phuket on the most beautiful street or in Bangkok among shops selling vintage American memorabilia and old classic cars and motorcycles. Most people sell new stuff, but it’s not uncommon to have a cool mix of homemade things, oddball items you don’t see anywhere else, and things that make you stop in your tracks, like obscure 1970s records or Japanese baseball uniforms.
Speaking of which, before I start foaming at the mouth and this turns into a lovefest, I still say Japanese flea markets are the best, mainly because they have the weird, quality second hand stuff I like, but Thailand is more festive and it might be out-Japaning Japan in the cuteness game.
The night markets are one explanation as to why women love Thailand: everything is cute: the presentation is low-key, the venues are calm, the delicious food is all in bite-sized portions, the clothes are petite and subtly stylish, not to mention the general inexpensivosity. It’s all one big, cozy, fun, safe night out. 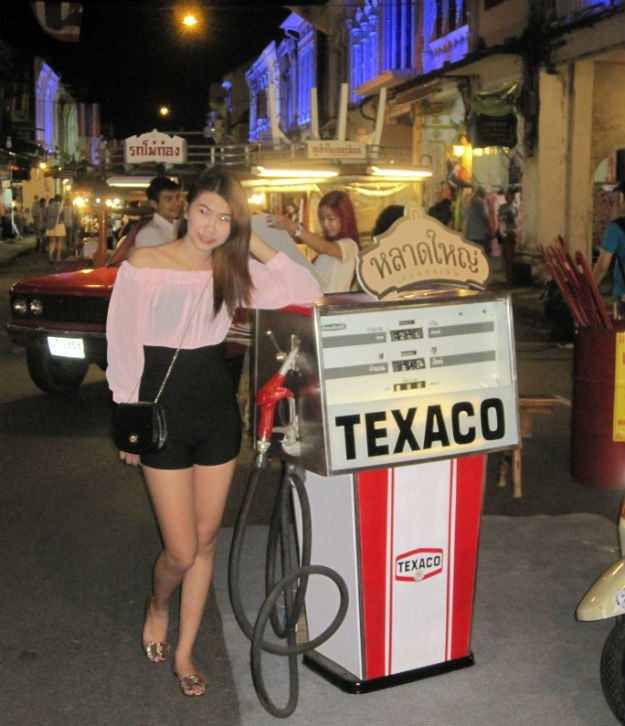 There is an epidemic in Asia of people needing to pose next to something, anything. I don’t get it. Is this an extension of the selfie obsession? (I would say the number one thing sold on the beaches of Thailand is a metal rod that attaches to your smartphone which lets you take a selfie two feet farther away.) People had to wait their turn to take their photo next to the Texaco pump, fiddling with the nozzle. This girl’s boyfriend wasn’t pleased with me. 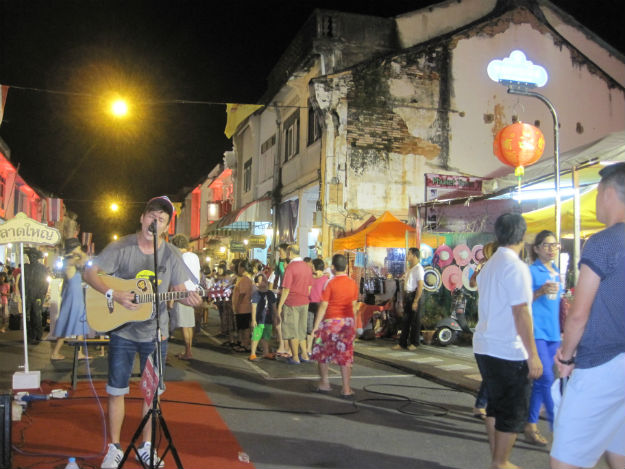 The Sunday night Market on Thalang Street in Phuket Town. Every night market in Thailand has live music, often several acts at the same time. 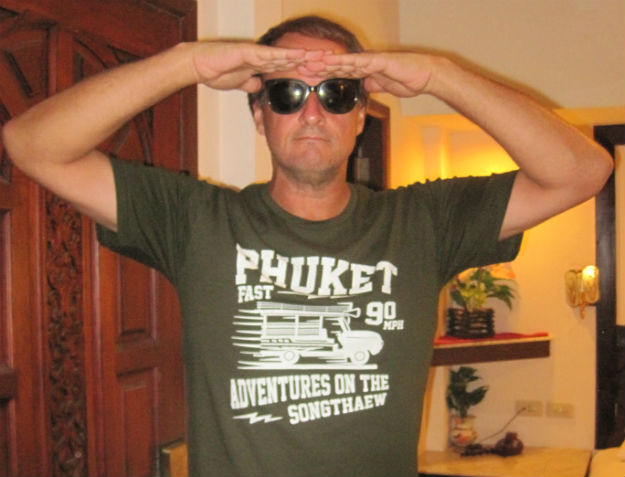 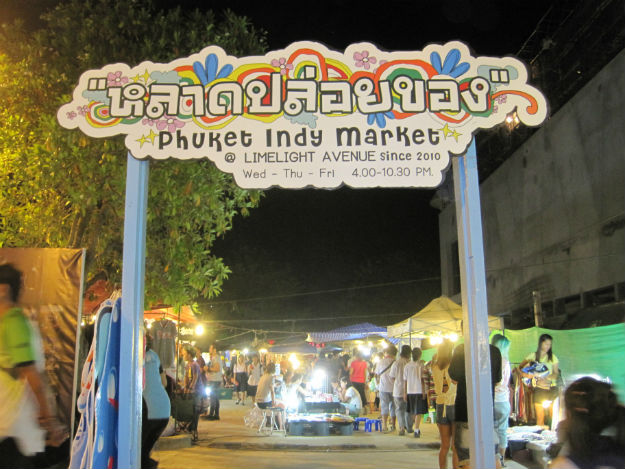 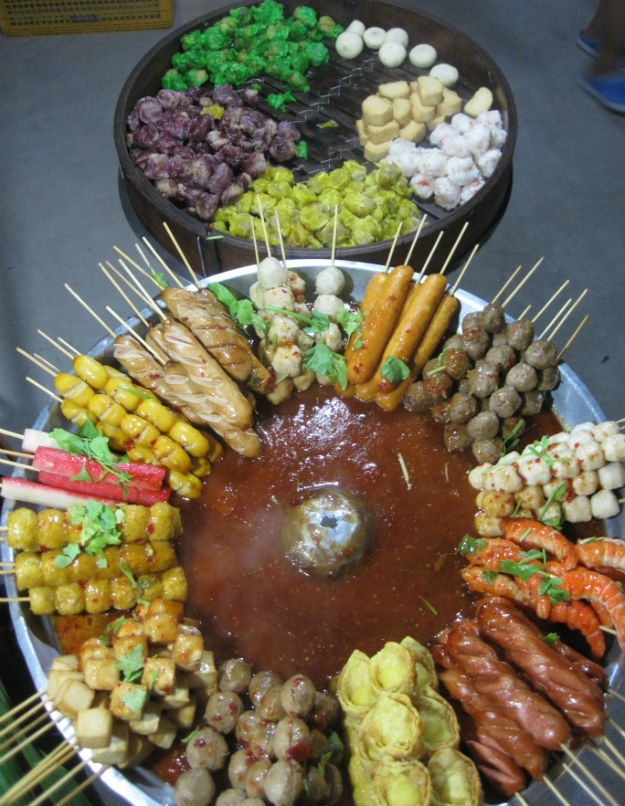 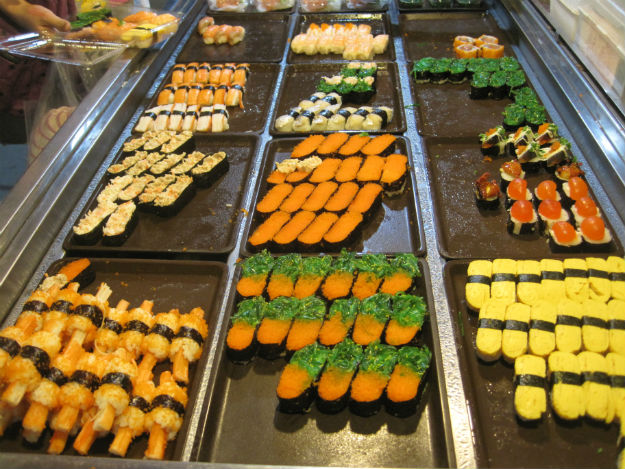 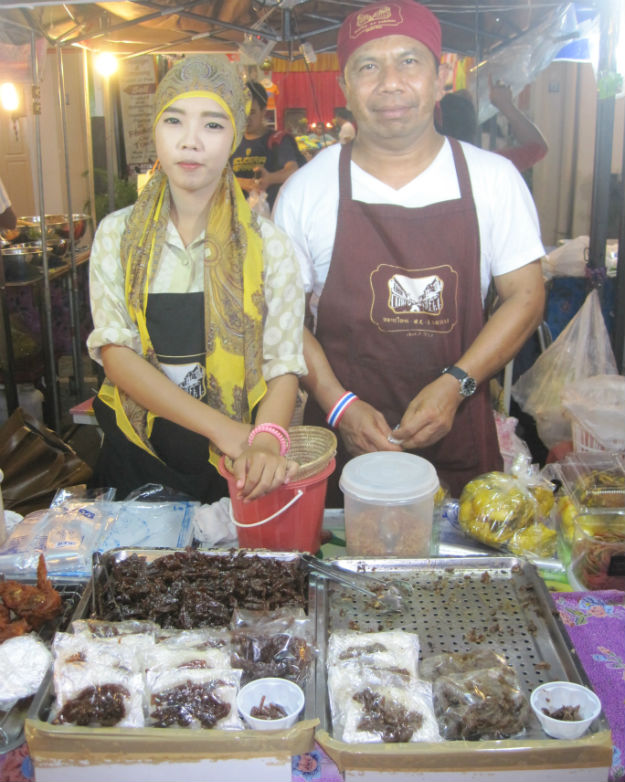 The woman laughed when I returned for another sticky rice with sweetened, dried meat, chiding me, “Again?!”

SEMI-PRACTICAL INFORMATION:
Krabi‘s night market is really all about food, but it is fun and busy. Both nights I was there it rained, so I had nothing to do but continue my pork-eating binge. Spain and Thailand are the two pork-eating capitals for me. In Thailand they make an addicting sour sausage that comes from the Northeast.
The Indy Market in Phuket Town is supposedly for teenagers to sell their stuff, but some teenagers looked pretty old. It’s Wed-Fri nights, small, but with a nice variety of goods and foods on offer.
The Sunday evening Thalang Street Market in Phuket Town is on…Sunday evening. Thank you. It’s a blast, but I get the feeling it will turn into Chiang Mai’s and become too crowded. Go while it’s perfect.
On the north end of Karon Beach there is a night market on Tuesday evenings, but it’s bogus and not worth your time unless you are nearby.
There is something newish in Bangkok called JJ Green (Chatuchak is also known as Jatujak, or JJ) on the north side of Chatuchak Market on Saturday and Sunday evenings. It’s excellent, maybe my favorite one. Fantastic atmosphere, also on the verge of becoming too popular, but it’s a big space.
The Talad Rot Fai (Train Market) used to be just to the west of Chatuchak Market by the train tracks but then moved to the far other end of Bangkok and kept its name, confusingly. I went on a drizzly evening, so I couldn’t get a full taste of it, but the most interesting sellers are way in the back by the driving range. It’s Thurs-Sun evenings. The easiest way to get there is to take the BTS Skytrain to On Nut station and find the seungthaew (pickup truck, 7 baht) that is going to Seacon Square, then walk behind it from the Tesco Lotus end.
The Thieves Market at Khlong Thom by Worrachak and Charoen Krung Roads is worth checking out, but it’s a zoo. I believe it is a day market most days but a night market on Saturday and possibly other days. Getting reliable. recent information is tough and you can’t trust every website you see, except TheDromomaniac.com.
Chatuchak Market is the granddaddy of them all, though it’s only a day market. I don’t lose sleep if I am in town and don’t go, but I understand that it is too much of an institution to pass on if you have never been there before. I make a beeline to one shop I like that sells unique t-shirts, but nothing else stirs me.
I went last weekend. There is a police office next to Chatuchak Market that also acts as tourist information. I always pop in because they speak good English. It was only later when I realized this was a strange conversation:
Me: “How do I get to the Thieves Market?
Policeman: “It’s near Chinatown. Are you looking for illegal DVDs?”
Me: “No, just looking for second hand stuff, old things. What do they have there?”
Policeman: “It was known as a place for stolen items, but now most people go there for illegal DVDs.”
And then the helpful policeman told me the wrong bus and it took hours to get there. 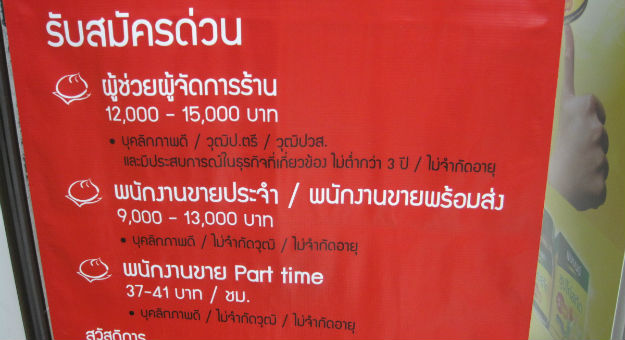 These markets might be for middle-to-upper class Thais. This is a job announcement for a fast food place in a mall in Bangkok. The pay for the part time job is 37-41 baht an hour, which is about US$1.20. As I said in my last post, Bangkok is cheap, but it’s not that cheap, and that’s from a foreigner’s perspective. It’s hard to find noodle soup for 40 baht, and one shouldn’t have to work an hour to afford a simple noodle soup. It must be tough to survive at that wage.