NOTE: I flew out from Nepal twelve hours before the big earthquake and I left the Langtang National Park about three days earlier. I started three blog posts before I left: a fluffy one about Kathmandu, a big one about trekking in Langtang and this one with some lightweight ruminations and practical information about the trek. While it feels trivial to write about traveling in Nepal since there is so much desperation and suffering in the aftermath, I decided to put these blog posts up anyway for myself, for my own memory. 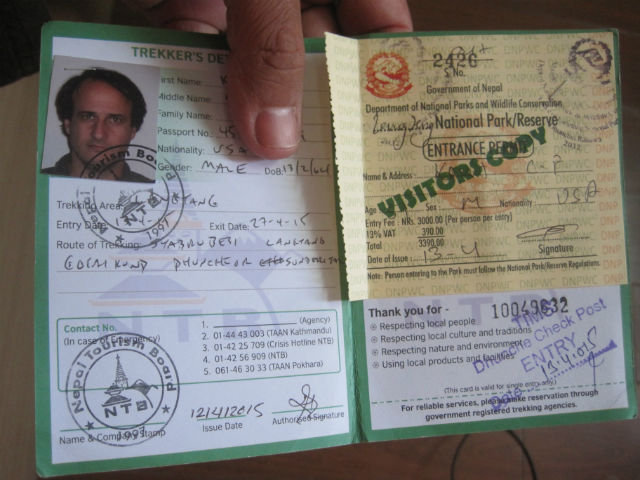 If you have a bunch of 15-year-old visa photos laying around, bring them to Nepal. You need one or two for a visa, one or two for this TIMS card, which is a permit to hike, and one for each SIM card you want to get. No one cares if they are old as long as they look vaguely like you.
The TIMS card is 2000 rupees and then the Langtang admission fees are about 3300 rupees. It grinds on me that foreigners pay over $50 in fees to do the main treks with little to show for it. If it was evident the money is being used to benefit these far-flung communities, that would be different.

It might seem insensitive at worst and crazy at best to talk about trekking in Langtang, but I have a feeling they will rebuild and subsequently be eager for travelers. A guy sent me this link about the “Ground Realities of April 25 Earthquake in Nepal” to point out that the devastation and untold numbers of upended lives are very real, but the entire country isn’t under rubble.
At the time I gave little thought before I went to Langtang. I was deciding between the Langtang and Everest Base Camp treks and I chose the one closer to Kathmandu. My only regret in not trekking Everest is that Everest might become too expensive to do in the future. Everest must be great, but the name “Everest”, like Timbuktu and Zanzibar, has an inordinate grasp on the imagination. If it was called Scunthorpe Base Camp or Pacoima Base Camp, I suspect there’d be a smidge less interest. I could be wrong. If Mt. Scunthorpe was the tallest peak in the world, I suppose we’d all want to go. 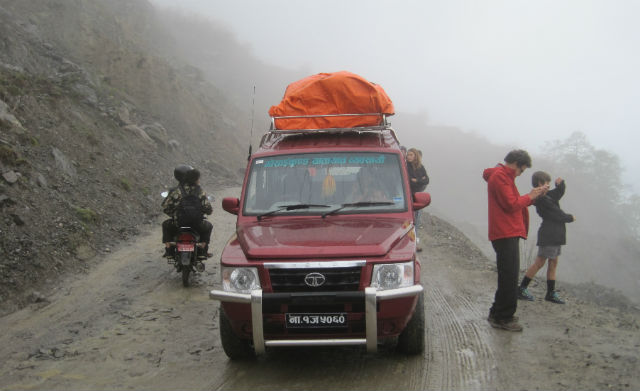 Whoever said, “Getting there is half the fun” has never set foot in Nepal. I love being in Nepal, but I despise traveling in Nepal. I took the most luxurious transport possible to go to Syabru Besi from Kathmandu, a cramped jeep, and it was still horrendous. It’s also a reason people combine the Langtang trek with the Helambu trek: you can walk back almost all the way to Kathmandu and avoid Hell Road.

I am in better shape than I look from ALL appearances, but I am not an avid hiker. It isn’t fun to go by myself. However, I like going by myself in Nepal. There are a lot of people on the trails. It’s never boring. I might become an avid hiker if it wasn’t so dang cold. Is there such a thing as a warm mountain?
I might be unrecognizable to you on a mountain. When I first start chugging up the hill, it’s immediately tiring, but for some inexplicable reason a metamorphosis occurs and I go from being a gassed-out schlub to Grandmaster Alpinist. It’s fast in coming. I quickly become stronger, I look better, and at the end of a trek I feel in tremendous condition. By the time I get back to town, I have lost weight and have a healthy sheen, which explains the innumerable girls of all races, colors, and religions throwing themselves at me.

I saw surprisingly few trekkers like me on their own without guide or porter. There is zero reason to have a guide unless you expect your guide to educate you about everything you see. You certainly don’t need a guide to show you the way. Also, you can be sure the guide is taking you to places to eat and sleep where it suits him/her best, not you. An argument I’ve heard is that someone is there in case you get hurt, but then what? I don’t think the guide will do more to help you than anyone at a guest house, but I might be completely wrong.
Do you need a porter?
No.
If you aren’t convinced, then what is the maximum weight you are willing to carry every day? You really don’t need to bring much with you, as I will explain. Everyone says this, and we all nod in agreement, and then we bring conga drums, 15 rolls of toilet paper and “War and Peace” in hardcover. It’s when we get a few days into the trek and we notice we haven’t used all of the stuff we brought when we start to question our choices. 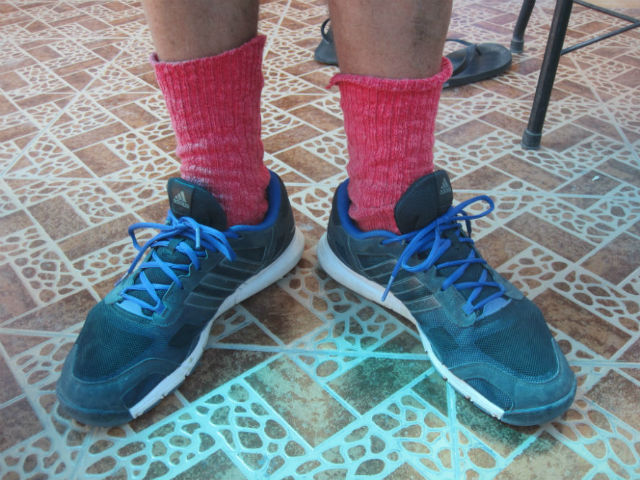 Yes, I do stand like this. While these are hardly trekking shoes, your average porter wears something much less appropriate and are often in sandals or flip flops. 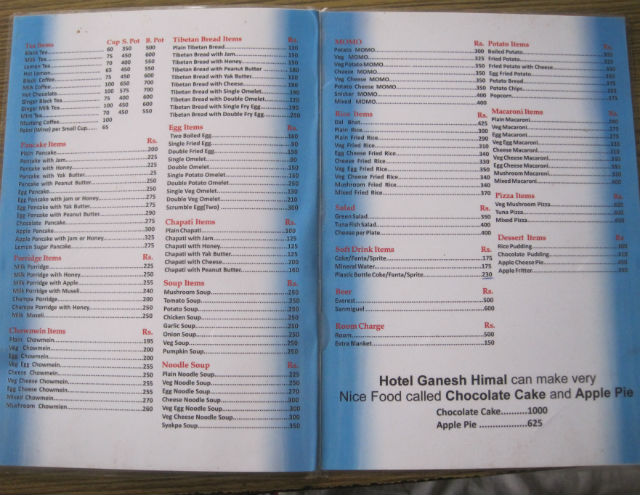 This is a typical menu from the trek. Can you read it? (US$1 = 99 rupees.) The odd thing is that two or three days deeper into the mountains the prices are nearly the same. Within villages prices are fixed, but there is wiggle room, especially for the room and things like a solar/gas shower or power for charging devices. 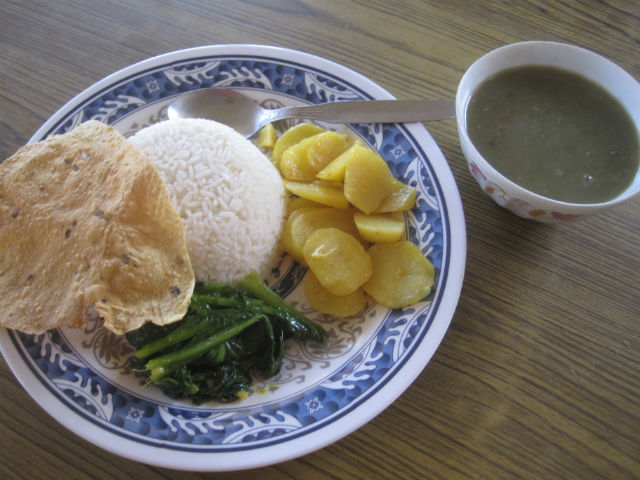 Dal baht, we meet again. This is the one and really only meal Nepalis eat: lentils, rice and “curry” that is often just potatoes with some pickled vegetables and a papadam. I like it, and I have a tremendous capacity to eat the same food over and over, but after a week dal baht tested me.

I’ve got something to say about water. I bought a package of fifty iodine pills for only 150 rupees, each pill good for one liter. The aftertaste isn’t as strong as I remembered so maybe they are improving the recipe. On the trek several guest houses claim to have filtered water, but I was wary. I saw a shack on the trail that had a water machine with a built-in filter. I asked how often they change the filter and they happily said it was only necessary every four years. Call me skeptical.
I have good reason to be wary. My first time in Nepal I was lackadaisical about water and I came down with giardia. Let me sum up giardia in two words: explosive diarrhea. (You’re welcome.) It is so unforgettably brutal that it isn’t worth risking your stomach to save a few rupees by trusting your innards to anyone else. You have too much to lose. Also, portable filters have come way down in price, making them an attractive alternative. 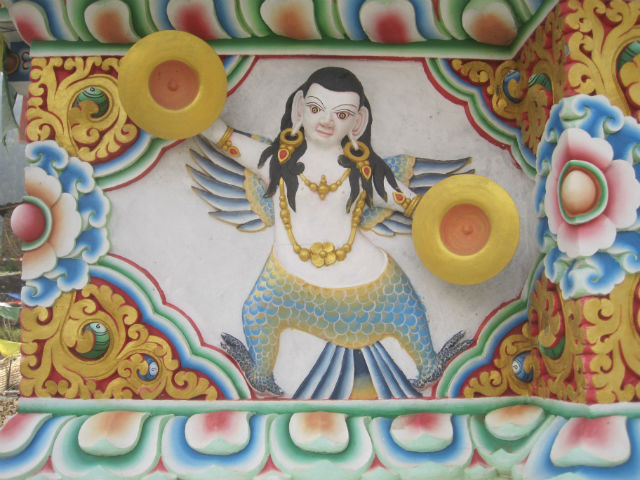 Packing ideas
If your backpack gets wet it’s a good idea to have some bags to keep the things on the inside dry. I have an impressive collection of plastic bags from around the world. (Is this a good time to mention that I am single, or would that be redundant?)
Simply, bring an extra complete set of clothes. It isn’t as bad as it sounds to wear the same clothes day after day as long as they stay dry. There are stoves in almost every guest house at dinner time where you can hang wet things. (I avoided small guest houses for this reason; I didn’t want them to waste wood to start the stove just for my benefit.)
1 poncho/raincoat in bag (never used)
1 phone for a flashlight (I didn’t bring a flashlight, then later remembered it is on my cellphone. When it is after dark and you want to use the toilet down the hall, a light is handy.)
1 sunglasses (the sun at altitude and the brightness of snow is intense.
2 plastic water bottles
1 small towel
1 fleece neck warmer
4 socks
5 underwear
2 zip-off gender-appropriate lightweight pants that turn into shorts (I am always amazed at how many people hike in jeans. They’re heavy and take forever to dry. I guess those people never take them off so it isn’t an issue.)
1 fleece pants (a borderline bring, but they are pretty light. They are better for the evenings and for the sleeping bag if it is especially cold.)
4 shirts (2 cotton, 2 not)
1 fleece, then given another plus a long-sleeve shirt
1 cap with bill against sunburn
1 knit cap that covers the ears
1 windbreaker (I was lucky to get away with bringing mesh running shoes and a windbreaker in lieu of a real jacket. My windbreaker had a patch for the Cuban Red Cross that I got in, um, Haiti (what’s the statute of limitations on—never mind) but it had the effect of some Nepalis getting wide-eyed and asking with hope or expectation that I am doctor.) 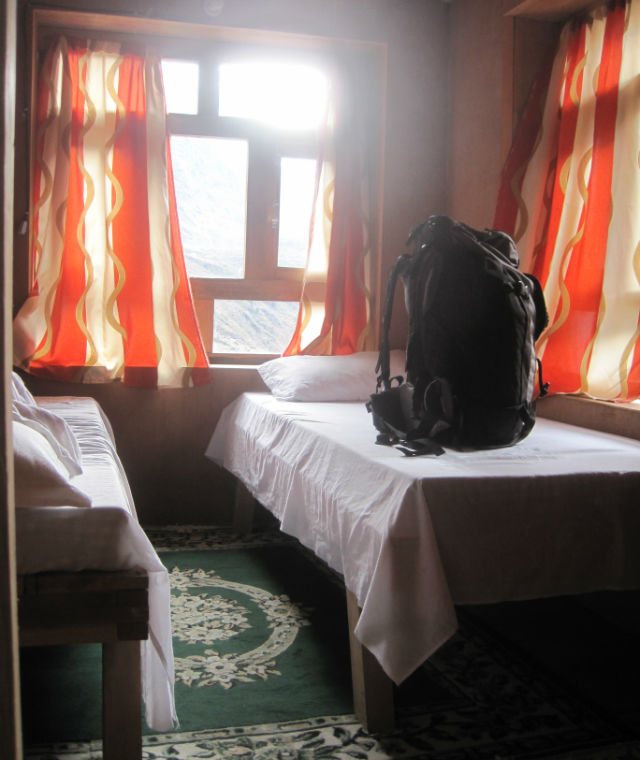 Nearly every room is exactly the same on the trek. I only think about warmth. When I check out a room I wave my hands slowly by the window frames and doors to feel the gaps for drafts, but they come from everywhere. I can’t be the only sissy who would pay more for something more airtight.

For the Annapurna trek I did a few years ago I rented a sleeping bag at 50 rupees a day, I think it was. Renting isn’t a crazy idea even if you accept that the bags really aren’t cleaned between uses rather than just aired out. I claim that the sleeping bags don’t get dirty from sweat, just a light grime. It’s manageable. (What am I saying? I am losing my mind, but I am almost done.)
This time I bought one for 1700 rupees, but having a sleeping bag at all might have been a mistake. You really don’t need one on the Langtang trek unless maybe it is the highest of high seasons (Sept/Oct) because every guest house I saw always had extra blankets. They are of questionable hygiene, but often you are of equally questionable hygiene. (Wait, I am countering my own argument, but the end is near.) The blankets are super-heavy for some reason and two of them feels like a sumo wrestler laying on top of you—not that I have experienced that personally. Let’s move on.
You also really don’t need to bring food. I met a girl who carried 12 Snickers, which are a sort of food currency on the trail, but that’s too much weight and Snickers don’t cost a whole lot more up the mountain than back in town. 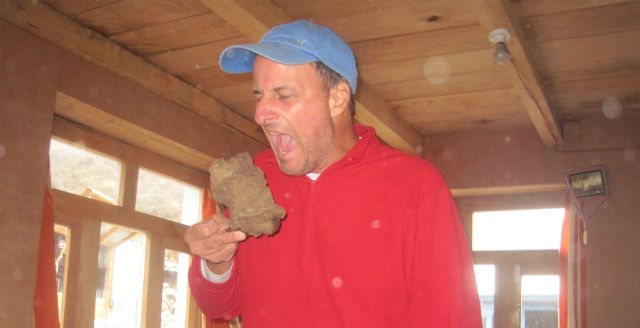 When the Snickers run out, sometimes a light snack of dried cow dung really hits the spot. When not providing The Dromomaniac with sustenance, it’s used to fire the stoves.

Hot tip: Nepali cell phone credit goes a long way. I got a SIM card for only $2 and to call a USA landline is pennies. If you are leaving Nepal and still have a lot of credit on your phone, if Ncell is your provider, you can donate your excess credit (up to about 500 rupees a day) by transferring it to another subscriber for nearly free. I forget the code to do it. It may be only a few hundred rupees to you, but to a Nepali it is a very useful and welcome gift.
Why don’t you stay with me? You can follow along with RSS, subscribe to an email feed, see what’s cooking on Facebook, pray that I’ll say something worth remembering on Twitter and if you are really slumming it, there’s always Google+. (I’ll follow you back!)